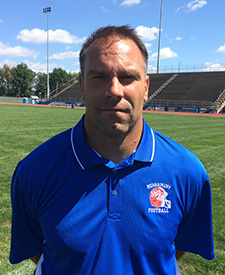 Langhorne: Steve Wilmot, a 20 year fixture at Heartbreak Ridge, has been named the football team’s new head coach after receiving a “thumbs up” from the Neshaminy School Board. On the heels of Mike Frederick’s recent departure, the search for a replacement was immediately pursued in earnest by Athletic Director Tom Magdelinskas who just finally recommended Wilmot to the District’s bigwigs. Arriving at Neshaminy in the early ’90s, he served as an assistant coach for 19 years under the legendary Mark Schmidt and then Frederick in 2014. Identified as a versatile and knowledgeable football man, Wilmot has held a number of titles while helping to direct the Redskins’ grid club. And also viewed as a Neshaminy man to the core, his appointment is seen as a terrific choice by all concerned with his steady hand and demonstrated capabilities expected to continue the program’s high level of success.

A native of Flourtown in Montgomery County, Wilmot attended Springfield Township High. A star on the Spartan’s football team, he graduated in 1989 and then pursued his secondary education at Lock Haven University. Continuing his football career while there, Wilmot was a three year starter as a lineman and as a senior was elected captain of the Bald Eagles. A top performer, he was named 2nd team all-conference following his final season. And with Schmidt coaching at Lock Haven during his four years of playing time, Wilmot then gained real life experience working with him as a fifth-year student coach.

After graduating from Lock Haven Wilmot soon became part of the Neshaminy School District’s teaching staff while securing a position with the football team in 1995. Displaying his talents since that first season, Wilmot has been a line coach, defensive coordinator, lifting coach and also assistant head coach. And with the Redskin program flourishing during his tenure, his efforts have helped produce some of the great Neshaminy teams including the 2001 state champions and 2004 state silver medalists.

Commenting that he looks forward to maintaining Neshaminy’s winning tradition, Wilmot will be assisted during the upcoming season by Neil French and Jay Weidenbaugh. Both men are very familiar to the Langhorne community and will serve as co-Defensive Coordinators. Wilmot also indicated that other staff positions are continuing to be filled while noting that he is excited about the opportunity to make his mark as head man of the Redskins. He also considers the SOL National to be one of the state’s premier conferences, describing it as an excellent platform for the program to continue to excel on the grand stage that is Pennsylvania scholastic football.

As expectations are high for the 2015 Neshaminy football squad there’s no doubt that Wilmot’s ascension to the top will certainly heighten the anticipation of its fans. And just as those fans are 100% behind the team’s new head coach, all of us at the site are as well. So with a good luck shout out to Coach Wilmot, we’ll end with our favorite two words: