Memphis: Harry Schuh, a 1961 Neshaminy graduate who was a star at “The Ridge” during the heady days of the Redskins′ “Golden Age”, died on Monday, May 20 at his home in Memphis. One of the greatest football players to take the field in Langhorne, he was recalled as a great friend to many and a lifelong fan of Neshaminy, Feasterville – his home – and Lower Bucks County.

A multi-sport athlete (besides football he also played basketball, wrestled and was involved in track and field), he was the first Redskin selected all-state, as a fullback, being honored twice (as a junior in 1959 and then as a senior in 1960). He played in the 1961 Big 33 and attended Memphis State where he continued to excel as an offensive tackle, earning all-American honors in 1963 and 1964. Drafted second overall in 1965 by the Raiders (Joe Namath was first that year), he played ten years as a pro which included an appearance in the second Super Bowl in 1968 when Green Bay topped Oakland, 33-14.v 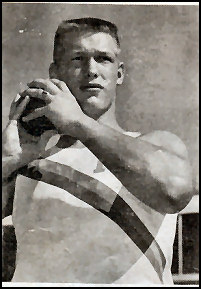 A member of the Tennessee Sports Hall of Fame, his number was retired by the Tigers of the now named University of Memphis in a recent ceremony. He was selected as a first team lineman on the Raiders’ all-time team as well as being voted by Pennsylvania fans as a member of PFN’s all-century first team. He’s a member of the Pennsylvania sports Hall of Fame, Neshaminy’s football Hall of Fame and was also selected by the Courier-Times as the top scholastic grid player in Lower Bucks County for period from 1950 to 2000. He has also been a recipient of many other awards and accolades over the years.

Playing for Harry Franks and John Petercuskie in ’58, ’59 and ’60, Schuh started all three years with the ‘Skins posting a 28-2-2 record during those seasons. An exciting time for Langhorne fans, the period from 1952 through 1965 saw Neshaminy book a gaudy 128-11-7 record. And with Schuh and his teammates dead-center during those 14 years, only two 13-7 losses to Easton marred their contribution to the Blue and Red.

Truly one of the greats to have walked the halls of Neshaminy High School, no doubt he graced the lives of those who were lucky enough to know him. So it’s with sadness that we join those saying goodbye to one of our favorite sons, Harry Schuh.