Newtown: We are away in Newtown to meet head coach Vince Bedesem of the legendary Bedesem coaching family and his Council Rock South Hawks on a beautiful fall Saturday. With clear skies and the temps hovering around 60 degrees it is perfect weather for some football. ‘Skins are coming in at 4-4 and need this win to keep any playoff hopes alive. Hawks are looking for their second win on the season so it is sure to be a good game.

‘Skins won the toss and scored in the first minute and a half on two plays; a thirteen yard run by Chris Janes and then with an explosive forty three yard touchdown run right down the middle by John Hutchinson. After a quick Hawks’ three and out, Neshaminy moved sixty yards on a tremendous throw and catch between Brody McAndrew and Dawson Obringer to get the ‘Skins down to the Hawks’ 9 yard line. A few plays later Chris James scored on a two yard run and The PAT was good bringing the score to ‘Skins 14 – Hawks 0.

In the ensuing Hawks’ possession and with the clock running down on the 1st quarter, Obringer sacked the QB for an eight yard Hawks’ loss which forced a punt. A penalty forced a re-kick and the ‘Skins started their drive with the ball on the thirty five yard line. After a seven yard run by Hutchinson the teams switched sides as the 1st quarter ended.

The ‘Skins continued moving the ball easily down the field with help from a thirteen yard McAndrews-Sheehan connection, a sixteen yard screen pass to Gavin O’Connor and seventeen yards on the ground courtesy of James. At the Hawks’ nineteen yard line McAndrews was sacked but the ‘Skins got those yards back and more on a nine yard throw to Sheehan. Stopped at the eight yard line the ‘Skins opted for a successful twenty five yard field goal and brought the score to ‘Skins 17 – Hawks 0.

With the ball in the Hawks’ possession on the ‘Skins’ 37 yard line Tedoh Sakhokia sacked the Hawks QB for a seven yard loss. An illegal substation penalty was immediately called on the Hawks moving then back to 3rd down and 27 yards to go. An unsuccessful pass brought about the punt to Neshaminy but an interception gave the ball right back to the Hawks. Even with a Nick Gordon’s fifty four yard run, the Hawks could not keep their drive alive. Stuck at the ‘Skins thirty seven yard line after a penalty and faced with a 4th and 24 yards to go scenario, multiple ‘Skins sacked the QB ending the hopes of the Hawks scoring prior to half time.

The clock ran out sending the teams to the locker rooms with the score at ‘Skins 17 – Hawks 0.

The ‘Skins kicked off at the start of the second half but the Hawks only managed six yards before a three and out and a punt that left the ball at the forty seven yard line in Hawks’ territory. ‘Skins moved the ball efficiently down to the 12 yard line where some great blocks by Stephen Jackson and Kenny Monaco opened up holes for a twelve yard James touchdown run and Hughes added the extra point and the score was ‘Skins 24 – Hawks 0.

The Hawks next possession was another three and out thanks to some great coverage in the secondary by Mason Demi. Punt receiver Sheehan signaled a fair catch on their own forty one yard line but a fumble during the first play’s hand off gave the ball right back to the Hawks’ David Nolter on their own thirty nine yard line. A sack by Neshaminy’s Jordan Denis and great pass coverage by O’Connor forced a turnover on downs and the ‘Skins got the ball on their own thirty four yard line.

After back to back penalties McAndrew connected with Sheehan for a forty yard gain bringing the ‘Skins to their own thirty two yard line. “Skins moved down to their own twenty yard line thanks to some hard running by Greg Orleski and after an offside penalty against the Hawks the clock ran out on the 3rd quarter.

A botched snap and a sack from Nik Soska of the ‘Skins soon brought the Hawks to a 3rd down and 15 when Mason Demi’s coverage in the secondary forced the Hawks to punt. With 7:43 left in the game and the ball spotted at the Hawks’ eleven yard line the ‘Skins went for it on 4th and 5 on their own sixteen yard line but McAndrew was sacked and the ball went to the Hawks where they scored two plays later with a run by QB Caldani. A Sakhokia sack stopped the attempt at two additional points.

The Hawks failed to recover the onside kick on the ensuing punt and the ‘Skins started their final drive by eating up the clock with runs by Orleski who scored on a twenty seven yard TD run with 1:40 left in the game. The Hawks’ Gordon took the punt return to the ‘Skins’ 43 yard line. With a Caldani- Gordon throw the ‘Skins were hit with a pass interference penalty moving the Hawks to the ‘Skins’ twenty three yard line, but the clock ran out.  Final score ‘Skins 34 – Hawks 6.

We thank the Hawks for their hospitality and wish them luck in their next game.

The big game against the Pennsbury Falcons is next Friday night so join us in Fairless Hills for the annual rivalry showdown. 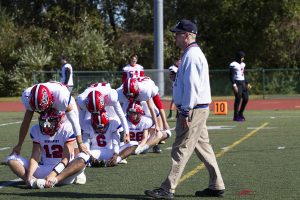 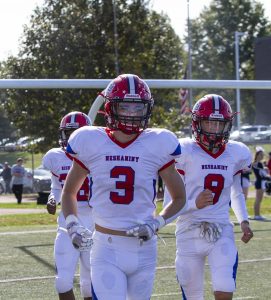 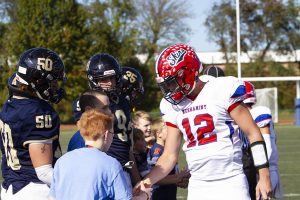 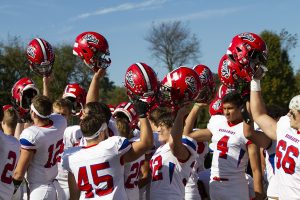 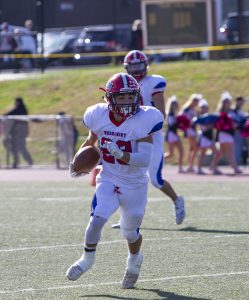 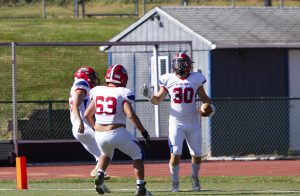 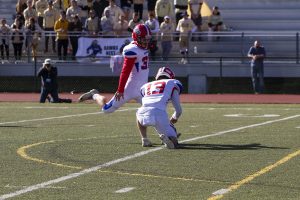 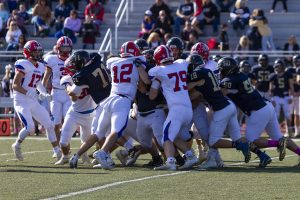 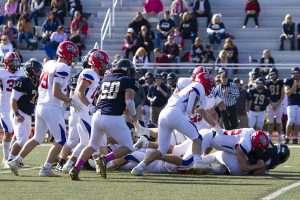 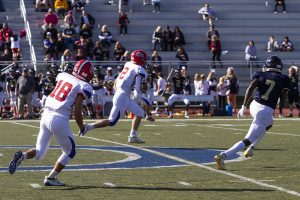 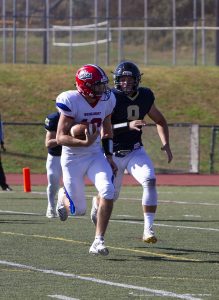 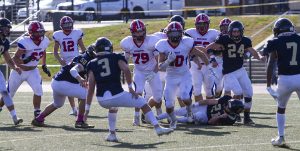 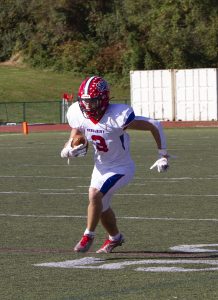 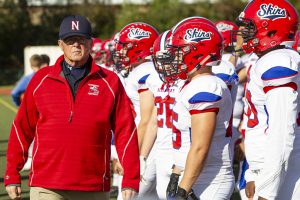 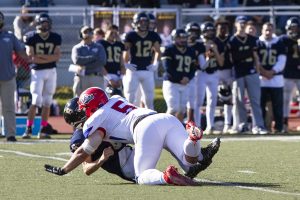 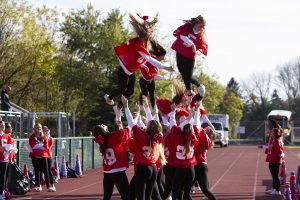 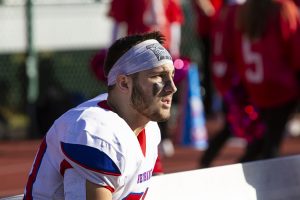 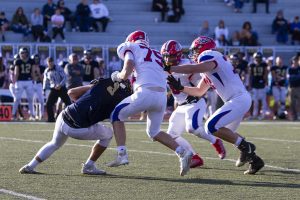 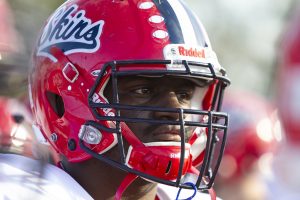 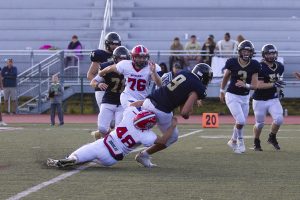 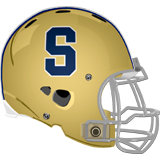