Coach Schmidt coaches his 124th game and enters the record books as the most prolific Redskins coach in School history. 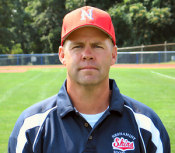 Although it may be hard to believe, this is Coach Schmidt’s 11th year as Neshaminy’s Head Coach which proves yet again the old adage: How time flies! But what a wonderful time it’s been for the Neshaminy family, its gridiron teams and the players, the school and the fans as Coach Schmidt has placed his mark squarely on the ‘Skins. Taking over a program that has a rich and storied history, Coach Schmidt has continued the long established tradition of winning football. His hard work and efforts coupled with his obvious skills and talents have culminated in the Redskins bringing home a State Championship in 2001 while enjoying a second trip to Hershey in 2004 (and it goes without saying that they’re in the hunt again). Of course, the measure of a Coach is not just a reflection of wins and losses. And in that respect, we feel confident that the players, parents, staff, school officials, administrators, and fans would all join the chorus shouting proudly how much Coach Schmidt has been a credit to the school and the community far beyond just simply Xs and Os.

And now, while already enjoying the title of “Head of The Class” when it comes to wins (81 through the Plymouth-Whitemarsh game), this season Coach Schmidt will surpass Charlie Beck as the most prolific Head Coach in Neshaminy’s history with his 124th game as the man-in-charge (Beck’s record of 118 was compiled from 1929 through 1942 and has stood for 62 years).

Finally, although knowing the man like we think we do – and that he’ll consider this tip of the hat unnecessary – we feel we would have been remiss if we didn’t point out this accomplishment. So Coach Schmidt: We’re glad you’re on our team, we love you and we hope that we’ll be celebrating Neshaminy football with you for a long, long time to come.