We need to take a minute to thank some folks who have been working with us for the last year. First, we want to send a shout out to Tim Ford '86 HOF for all of his memorabilia. He gave us so much we are still processing it.

Here is what he had to say: 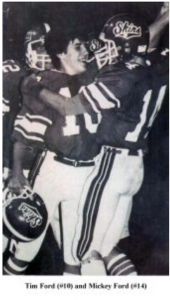 To the left is a picture of me (#10) and my brother (#14)… My brother Mickey was a senior and the starting QB at the beginning of camp. I was a junior and his backup. In our second preseason scrimmage at Parkland High, Mickey got hurt and suffered a torn MCL and was supposed to miss the rest of the season. He was determined to get back on the field at some point for his senior season. The picture is from the night of the William Tennent game at home, Game 6 on the season, and Mickey’s first game back from his injury. I started the first 5 games, but once Mickey returned, we split time at QB each game for the last half of the season. The picture is just after Mickey threw his first pass of the season in a regular game and it went for a TD! Neshaminy won that night 34-25 and Mickey and I each threw a TD pass to our superb receiver and Neshaminy Hall of Famer, Mike Downs, and we also both ran for a TD. 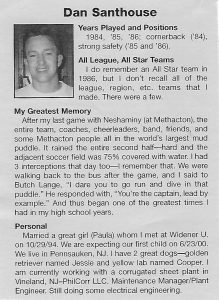 Picture and article of Dan Santhouse the night he was inducted into the Hall of Fame. The Methacton game from ’85, our senior year, is up on the website but maybe bigger than that being our last game and capping off an 8-3 season, was the post-game mudslide that Dan talks about in his interview. The memory of the game has faded a bit but we all still remember the mudslide! The game had to be played on a Monday afternoon because we got rained out on Saturday afternoon. It poured all day Saturday and the field was still wet. There was an adjacent soccer field near where we had to get the buses after the game. It was at the base of a hill and there was a huge mud puddle that formed from all the rain on the sideline of that soccer field. The team and the cheerleaders all ended up in that mud puddle and it was great way to enjoy our last game together and celebrate the best season Neshaminy Football had experienced in several seasons! Webmaster note: You can watch that game here. 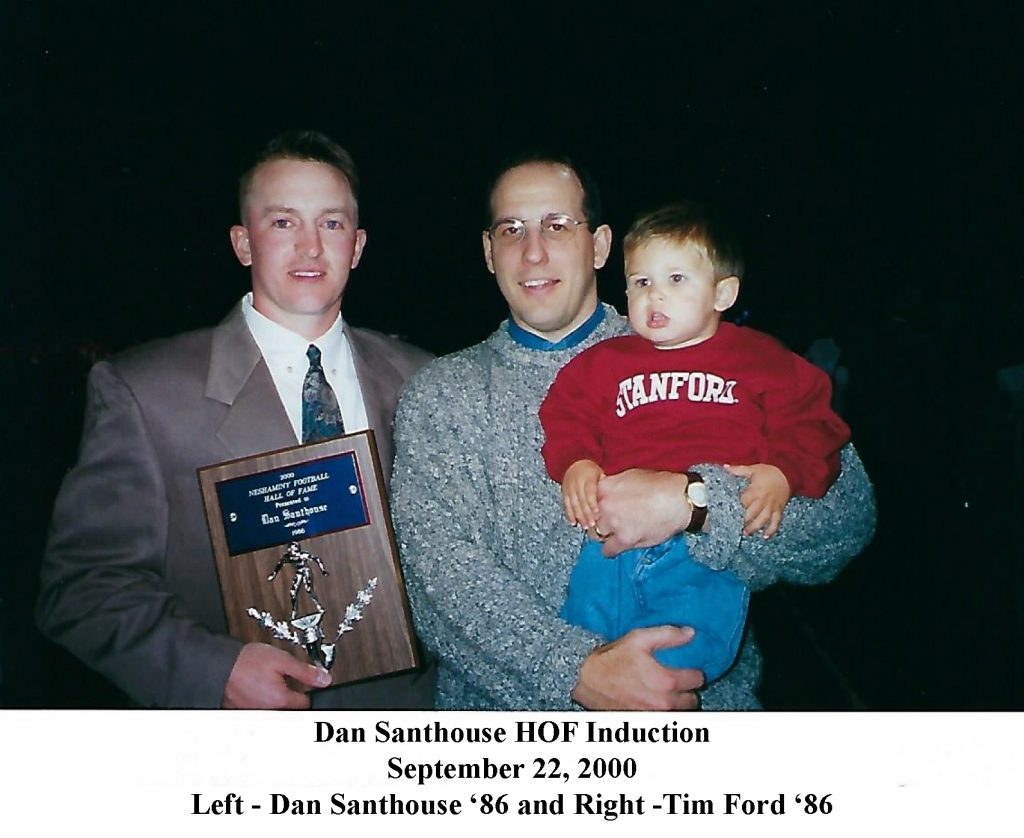 Picture of the ’82 Maple Point freshman football team below… This was the last Maple Point team to play a Neshaminy Langhorne team in football before the schools merged again for the ’83 season. The Maple Point - Neshaminy Langhorne varsity teams were in separate leagues and did not play in ’82. But the freshman teams were scheduled to play the last game of the season and the district decided to not make it a normal Friday afternoon freshman football game. They decided to let the two freshman teams play the last ever MP - NL game under the lights on Friday night at Heartbreak Ridge!

The team from MP defeated NL 16-0 in a game closer than the score indicated. It was 8-0, a one score game, midway thru the 3rd quarter when MP cashed in on a turnover to pull away from NL. After Dan Santhouse recovered a NL fumble near midfield, MP reached into their bag of tricks and perfectly executed a hook and ladder play for 6 and then also added a 2 point conversion. The Cougars worked on that special play during that week of practice, and after the fumble, Coach Pennypacker felt it was the right time to catch NL off guard after the sudden change.

Center Bill Cimochowski snapped the ball to QB Tim Ford who connected with wide receiver Ron Gorniak on the left side for a 10 yd curl route. As the NL defense converged on Gorniak, he quickly flipped the ball back to RB Dan Weissenberg who had circled out of the backfield. Gorniak’s pitch hit Weissenberg right in stride and he raced up the left sideline untouched for his second TD of the game and put the Cougars up for good 16-0! The play was great but the interesting fact though about that trick play was that all four players who touched the ball on that memorable play for MP, not only played together at Neshaminy for the next 3 seasons, but also played and roomed together at Delaware Valley College where they played for former Neshaminy coach Dick Bedesem. At Del Val, Cimochowski was a DE, Weissenberg and Gorniak were DB’s and Ford was QB. 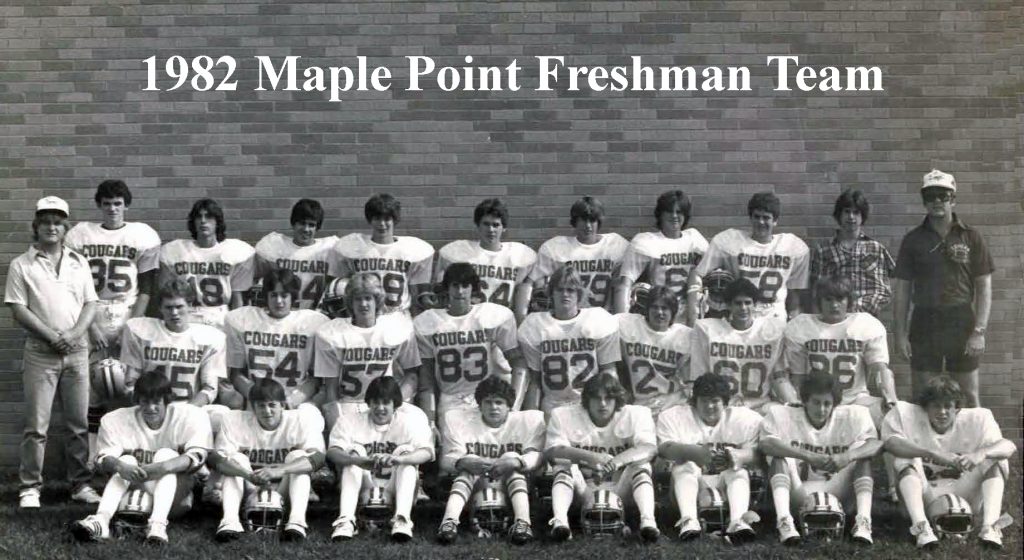 Next up is a big shout out to Craig Johns '68 HOF. He sent a real box full of treasures. When we opened the box we were amazed to find his actual jersey as well as the vinyl arrowhead sticker from his helmet, along with tons of newspaper articles and some photos. In fact, so much that we are still processing it. He is responsible for a lot of the information on the 1967 recap (and more is coming, so stayed tuned). Craig also has his own customized license plate - see photo below. He keeps up with the team and is still rooting for his 'Skins. His message to the 2022 team - "Mr Redskin '67 is rooting for you from Atlanta, GA!". 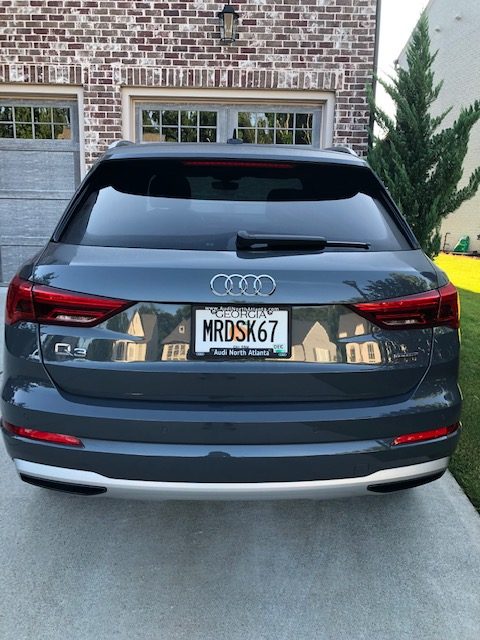 Last, but definitely not least, is Frankie McDermott! Frankie and his lovely wife met me at Coach's office to present me with 5 boxes of game programs going all the way back to 1984. In this stash was one of the most coveted programs - the 1990 season. He added so much to the list of game programs. Frankie was a stand out baseball player who still keeps all of his baseball memorabilia - see below. We are so glad he holds onto things as his collection of game programs was second to none. Thank you Frankie! 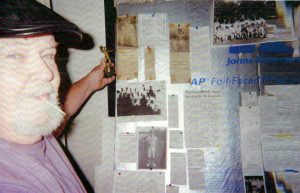 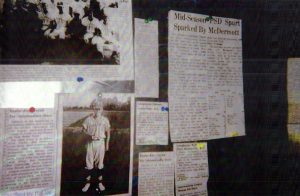 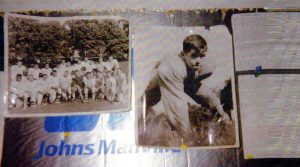