The summer before 9th grade started, Coach Neil French (Maple Point) had Kevin in baseball and knew he was a soccer player. He had mentioned that he wanted Kevin to kick for the Maple Point team that fall. During Babe Ruth baseball that summer, I ran into Erik Pederson at a game and he said that Coach Schmidt was looking for a kicker. I wasn’t sure but decided to explore the thought. Kevin signed up for Coach Schmidt’s youth camp with a friend of his (who never did play at Neshaminy). 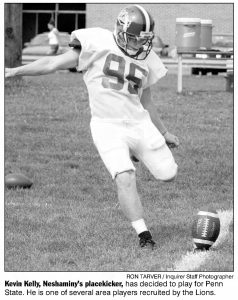 After the first day of the camp, he came home and said it was not really any fun and that he did not want to go back for day two. I told him to go (we had already paid) and to make sure someone saw him kick before the week-long camp was over. Coach Schmidt and the Neshaminy players who were counselors at the camp saw him kick on the last day of the camp and Coach Schmidt invited him back to kick in front of Tom Magdelinskas, a friend of Coach Schmidt, former coach and currently an assistant principal at NHS. He kicked three or four times for Mags over the course of two weeks because Coach Schmidt was on vacation at the shore. Coach Schmidt called Mags up to get updates on how Kevin looked. I came home from work at my lunch break and drove him to the practice field for each session, drove him home and went back to work. At the end of the two weeks, Mags met with Coach Schmidt and Mrs. Murphy and decided that he would be given a shot.

Kevin was committed to playing soccer in Scotland with the Langhorne Strikers at the beginning of August that summer and actually missed the first three days of camp. After getting in from Scotland at 11:30 PM on a Wednesday (he also was sick with the flu), Kevin showed up at the morning practice of camp on Thursday without any equipment. They gave him pants (with pads) and a helmet but no shoulder pads. At the end of the morning session, Schmidt put him on the spot (as he did all the time over the four years). He dropped a ball at about the 35-yard line and said that if he made the 45-yard field goal, there would be no sprints at the end. Kevin hit the field goal. I arrived to pick him up at the end of the afternoon practice and guys (seniors and teammates that he did not even know) were thanking him on their way home after practice. I asked him why everyone was thanking him and he told me the story. 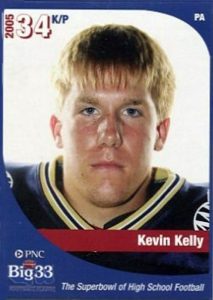 Coach French, who at the time was not on the varsity staff, was contacted to find Kevin shoulder pads at the middle school. Coach French came up with the smallest shoulder pads you could imagine – like the ones you get with a youth set in a box at Christmas. They looked pretty thin and small but they fit him fine. Jason Waiter, the quarterback that year and Kevin’s holder, literally had to get Kevin dressed the first week and a half because he had never had football equipment on before that and didn’t quite know how to get suited up. He also had never worn a mouthpiece.

He scored his first two points in that game while being 14 for less than a month. Pretty crazy stuff.

Well, that was actually how it all began.