The Big Picture 04 – The Games Are Won in the Trenches

LANGHORNE: Before I get to the topic of this short essay, I want to extend congratulations to those teams that survived Round One of the playoffs. For those that didn’t make it – there′s always next year. And while I’m at it (referencing the playoffs, that is), I think we should take a quick peek at the results and see how some of the “favorites” are doing (in no particular order and when I say “favorites” that′s per the collective wisdom of Pennsylvania sportswriters, fans and what have you and as they say: Opinions expressed herein do not necessarily reflect those of the management – so here we go).

First is the Out West gang (or as I’ve taken to calling them – “The Four Horsemen”): Pittsburgh Central Catholic (11-0), North Allegheny (11-0), Gateway (10-1) and McKeesport (10-1). That’s it. Just the four of them are left out of the original field of 16 that was competing for the WPIAL crown (note also that that was the consensus D7 Top Four from the get-go too). The arrangement calls for Central Catholic to meet up with McKeesport in one semi-final tussle and the Gateway Gators and North Allegheny Tigers in the other. It’s certainly going to be a huge Friday night out Pittsburgh way this coming weekend (not much more to say). As to Up North, I’d say the collision course that Parkland (11-0) and Bethlehem Liberty (10-1) seem to be on is just over the horizon. But first the Trojans do have to play the Wyoming Valley West Spartans who are 10-1 while the ‘Canes must get by the also 10-1 Hazelton Area Cougars (two fine, fine teams but the “experts” don’t expect either one of the Dynamic Duo to lose until they see each other).

As to the Mid-State region, Harrisburg (9-1), Bishop McDevitt (9-2) and Manheim Township (10-1) all won this past weekend, so take your pick (and there are still a total of 8 teams left in that D3/D6 bracket but the Cougars of the Capital City just keeping coming up Lucky Seven). Finally, and regarding the D10/Pittsburgh City champ match-up, call it Erie Cathedral Prep and Brashear but with all due respect, it’s hard to imagine one of those guys getting by the D7 winner. It also doesn’t look positive for a D12 (Philadelphia Public League) champion win over the D2/4/11 top dog either (in other words, it’s most probable that one of the Up North guys will play the D1 champion for the Eastern title).

That reminds me – D1. With the field narrowed to the Elite Eight (alphabetically it′s Central Bucks South, Downingtown East, Downingtown West, Glen Mills, Neshaminy, North Penn, Ridley and West Chester Henderson) it’s really getting exciting. And some “new” names in the Battling Bulls of Glen Mills, Warriors of West Chester and Titans from Central Bucks South have certainly livened things up. As to the ‘Skins, Knights, Green Raiders, and D-Town Twins, I think it’s safe to say they’ve been to the party a few times before. Who’s the favorite in that group? I’ll get back to you on that.

Anyway, with the playoffs “under control”, let’s stop for a moment and consider just how and why all of these teams got to this stage of the 2007 season (still standing and playing, that is). Is it a result of the effort of the “Fancy Boys” (you know – the quarterbacks, the running backs and wide out types)? Is it the defensive backs? How about the linebackers and corners? Or maybe the kickers and punters? Nope! People, although all those positions and the guys playing them are very, very important, there is one group that makes it all happen: The linemen. That’s what I′m talking about. The big boys on both sides of the ball. The “Hosses” – the fellows who eat all the food, lift all the weight and move everybody out of the way or clog things up so nothing can happen. The guys you’re glad are on your team when the other groups “Big Uglies” show up. The behemoths. The towers of strength. All the Mr. Dependables that come in everyday and just do their jobs. Yes sir – it all starts on the line. And I think it’s high time we remember that. Especially when it’s the Blue and Red linemen we’re talking about (the guys who play for Langhorne – get it). I will add this, though, the formula applies to every team that’s out on the field – just ask the coaches – but since I have a soft spot in my heart for the Playwicky bunch, I’m giving that group a nod this week. 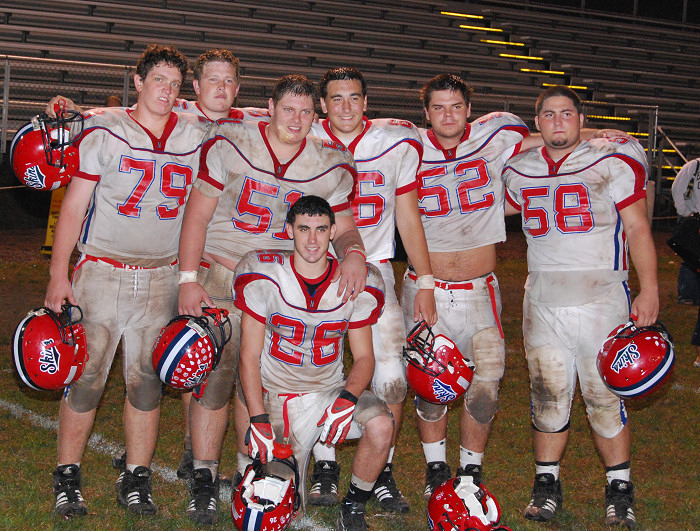 So, in no particular order, here’s the roll call of Neshaminy′s finest – offense and defense (and I want you to think of John Wayne and “The Quiet Man” as you′re reading – I don’t know why, just do it): Blair Gower, Aaron Lee, Dan Shirey, Kyle Dunleavy, Dan Wenclewicz, Paul Carrezola, Dan Hartman, Eric Brown, Jay Colbert, Chris Gettis, John Zavorski, Dylan Waterbury, Mike Hanley and Adrian Kizewski. Folks, these are the boys that are the first ones to meet the other team – these guys do the heavy lifting. They live in that ugly part of the field where East meets West every play (imagine a running back – a “Fancy Boy” – his job is to get past that mess as fast as possible which gives you an idea of what it’s like in “No Man′s Land”). But that lovable bunch of hulking linemen, not them – they live there. And on both sides of the ball – if they ain’t working then nothing is working!

So friends, whether your team is Neshaminy, North Penn, Ridley, CB South or any of the other “Elevens” – call a linemen on the telephone and say “thank you”. When you see one go by in the hallway, pull him over (if you can) and give him a big kiss on the cheek and say “thank you”. If you see one out at the local pizza joint or at the mall or waiting in line at the movie theater – just get his attention and yell out a great, big “thank you”.