Langhorne: Every so often the course we’ve set, the direction we’ve chosen and the goals we’ve proclaimed as ours are suddenly and unexpectedly pulled from our grasp. Plus it′s usually a complete surprise as some event or occurrence drops out of nowhere and makes the possible seem impossible and the previously attainable appear forever out of reach. And it’s also times like these that cause us to take a step back for a reassessment; a reassessment of just what it is that is important and what it is that is not as significant as it may have seemed. 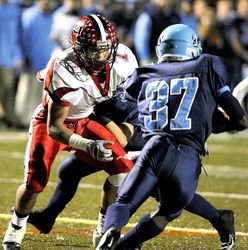 Marco Dapkey – This is one of those times – for all of us – as only recently did one of our own Redskins, Marco Dapkey, suffer such a moment. You see Marco is a senior-to-be; a hard working, well thought of and well liked transfer student from Monsignor Bonner. He’s entering his second full year at Neshaminy and as a football player as well. And from all accounts he was focused like a laser beam on the 2010 season and his chance to step out on the field as a starting linebacker and team captain that would help lead the Redskins in their latest grid campaign; however, within the last month what had seemed to him to be a nagging sinus infection and general fatigue revealed itself as something much more serious: Acute Lymphoblastic Leukemia (ALL). Requiring immediate attention, and within no time at all, Marco′s world has turned from his off-season pursuit of physical conditioning, weightlifting and 7-on-7s to that of in-patient at Children’s Hospital of Philadelphia and chemotherapy. 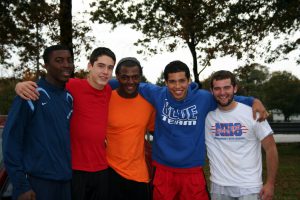 For most folks the news could have been a backbreaker; enough to turn a strong man weak. But not Marco; for just as he has quickly become known as a person of character around Langhorne, he wasn’t cowed by his situation but instead he was emboldened with resolve as not a complaint or cry of self-pity passed his lips. Choosing to fight and not quit, Marco has sat tall in the saddle and learned the rules of this new game. Then following the regimen, and just as he has done on the football field, he has taken the hits while dishing them out too. And with the support, love and backing of his Mom, siblings, many relatives and extended family, coaches, teammates and the Neshaminy community, Marco has looked his adversary square in the eyes, stood toe-to-toe in the ring and turned the tables. That’s right; it’s Marco that has taken charge of his opponent. Throttling its affect to the astonishment of his medical team (which saw Marco come to their doors in a very rough condition a month ago), they have now “green-lighted” him to head back home where he’ll continue the fight. And it is still a fight, that’s a fact, and it’s one which may take a while but Marco will not be in it alone, though, for another team is waiting for him here in Lower Bucks, Langhorne and at Neshaminy – us.

With that said, it′s not an easy fight and it′s not an inexpensive fight either, but you can help Marco by making out a check to the Middletown Community Foundation and sending it to:

Make sure you indicate that your check is to help Marco and they’ll take it from there (and every dollar is needed so whatever you can do will help).

You can also help by getting yourself out to Queen of The Universe or the Middletown Country Club on Friday, July 16th (7 to 11) for some fundraising events. At only $25.00, and with two locations, one certainly is close by (plus all proceeds go to help Marco).

So let’s all do something; today, right now when you’re done reading this article as Marco is on our team, he’s part of our family, he’s one of us and we’re not going to let him down anymore than he’d let himself down. We need Marco – the Redskins need Marco – and they and we are all behind him because although he might not know it yet, his courage, his determination and his attitude have shown us that with the right mindset and effort what at first blush might seem an impossible task, is not. Plus Marco has also allowed us to step back for a moment, reflect on what we’ve heard about this remarkable young man and then learn from him, as we all seem required to relearn from time to time, just what it is that is important.

The Big Picture 21 - The Wall of Fame