– Frederick, Franklin to be at July 25th event – 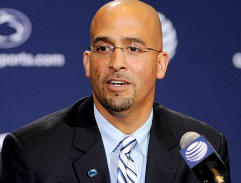 LANGHORNE: Unless you’ve been on a deserted island for the last year, we’re sure you’re fully aware that two 1990 Neshaminy graduates have made some big news lately. Of course, we’re talking about Mike Frederick and James Franklin. Both former Redskin football players that roamed Heartbreak Ridge from 1987 through 1989 (earning their diplomas in 1990), within just this year Frederick was named head coach of the ‘Skins grid team while Franklin took over the reins at Penn State. Pretty cool, we’d say (and it’s a for certain that the whole Redskin Nation is in full agreement with that sentiment).

Anyway, with the spotlight now shining brightly on this dynamic duo and former teammates, we’re more than pleased to announce you’ll now have the chance to listen to them talk and then engage them in some football conversation and even get some pictures. And that’s thanks to the Neshaminy football Hall of Fame committee that has arranged for a soiree to be held on Friday, July 25 at Kings Caterers on New Falls Road in Bristol. That’s right, Mike Frederick and James Franklin will be there all night (it starts at 7 p.m.), talking to the crowd and then talking to you afterward. The cost is $55.00 a head and you not only get dinner and drinks, and a chance for prizes, but you’ll get all the football chatter you can handle. Plus with the net proceeds going to help support the Hall of Fame committee’s good work (they’re the group that maintains the “Wall of Fame” complex just outside Harry E. Franks Stadium that we all enjoy so much), you not only have a great time but you help a great group that serves all Redskins fans. 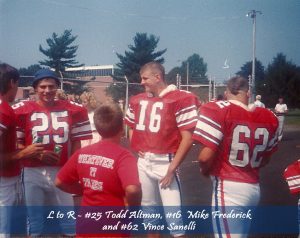 By way of background, and even though we know you know, both coaches played at Neshaminy under former head coach John Chaump in the late ’80s. And they were both integral parts of the great 1988 club that finished 11-0 and participated in the first PIAA statewide playoff arrangement. After graduation from Langhorne, Franklin then played at East Stroudsburg, where he starred all four years as a quarterback, before he set out on the coaching circuit. Moving up the food chain over the last 20 years, he just recently served as the head coach at Vanderbilt University, where he turned around a moribund group in just three years, before ascending to the top spot in Happy Valley. Frederick followed a slightly different path as he starred at the University of Virginia as a defensive end before playing five years in the NFL. And although having some assistant coaching experience, Frederick becomes a head coach for the first time with his appointment to the top spot after legendary coach Mark Schmidt retired in February.

With expectations for both men high this is your opportunity to hear their plans and outlooks for their teams, take pictures, exchange and listen to football talk with like minded folks and just have a great old time all night long. So don’t wait any longer – get your tickets today as we’re expecting a packed house.