‘Skins open it up at midpoint

Langhorne: Perfect football weather tonight and Harry’s House is packed with fans. The team is finally home after playing the first four games away. Time to celebrate our Hall of Fame 25th induction ceremony. Head Coach Kevin Conlin and the Abington Galloping Ghosts are in the house tonight. Both the ‘Skins and the Ghosts are 2-2 and both teams have the playoffs in mind.

The ‘Skins had first possession and struggled with penalties forcing a turnover on downs. The Ghosts went 3 and out but got the ball right back when Neshaminy fumbled. The quarter ran out with the Ghosts on the ‘Skins 23 yard line.

The Ghosts’ drive was stopped less than a minute into the 2nd quarter when a 'Joey Zack Sack attack' gave the ball to the ‘Skins on a turnover on downs. The ‘Skins proceeded to march down the field - with the help of Markus Burnett’s consistently steady runs, a 14 yard Lovelace catch and two Ghosts’ penalties - to the one yard line where QB Colin Baker ran it in for 6 and Kadon Nicastro kicked the extra point. The teams went out for half time with the score ‘Skins 7 – Ghosts 0.

Half Time: On the half time agenda tonight is the 25th Neshaminy football Hall of Fame induction. This is an honored event around these parts. Tonight’s inductees were Steve Fario ’79, Brett Connelly ’80, Dick Kirby ’82, Andy Marino ’05, Paul Carrezola ’09, Dan Shirey ’09, Jay Colbert ’09 and Head Coach Steve Wilmot 1995 – present. Jack Lyons received a Hall of Fame Service Award. For those of you who do not know Jack, he is a staunch supporter of all things Neshaminy football. He even has a room in his business office dedicated to Neshaminy football. He has quietly and generously done many, many good deeds over the years. Thank you for everything Jack!

The Ghosts started the 3rd quarter and drove down to the ‘Skins’ 40 yard line where they stalled and turned the ball over on downs.  With great field position, Neshaminy’s Baker and O company went to work and employed a mixed offensive bag, in the air and on the ground. With the help of a 26 yard Nick Buchys’ catch, yard grabbing Burnett runs and a crucial Lovelace catch. the ‘Skins were at the Ghosts’ 3 yard line when Burnett punched it in. Nicastro’s kick was blocked and score was “Skins 13 – Ghosts 0. With the Ghosts now in possession, Joel Bonner forced a fumble, Dimacio Cooper scooped it up and the quarter ended with Neshaminy in control of the ball.

With the ‘Skins' defense firing on all cylinders, the Ghosts were not able to score in the 4th quarter. The ‘Skins settled in offensively and were very effective using a combined passing and running game. Barnett scored in the first minute of the quarter and again with 7:15 left in the game on another Burnett run. Final score ‘Skins 26 – Ghosts 0.

Shout out to our entire defensive unit who were formidable tonight. Way to go Big D! And while we are at it, another shout out to rock steady Markus Burnett, magic hands Ashton Lovelace and the interceptors Travis Lavelah and Collin Giambrone.

It’s back on the road next week when we travel to Pennridge. Be sure to be there to root for our players! 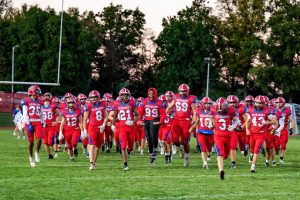 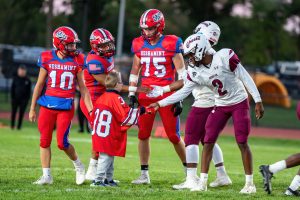 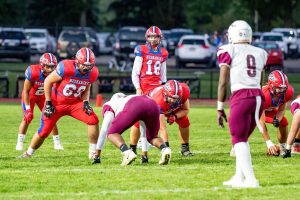 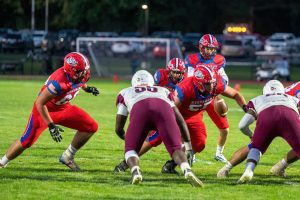 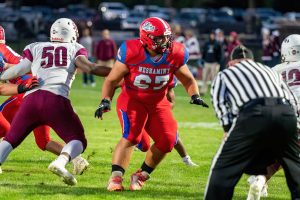 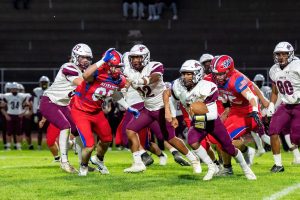 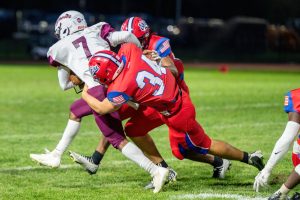 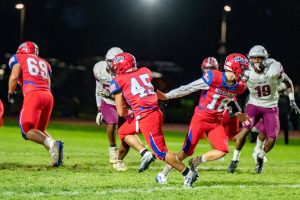 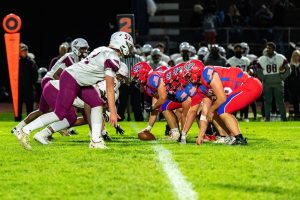 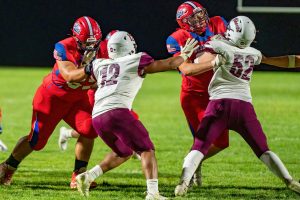 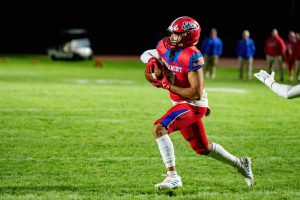 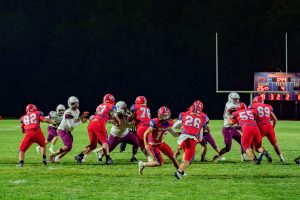 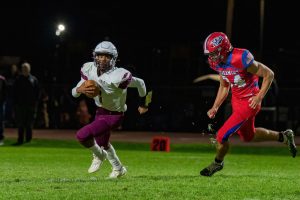 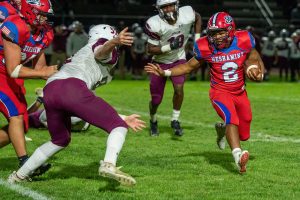 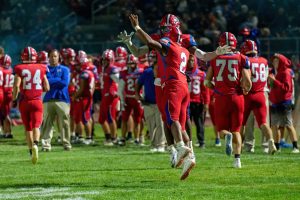 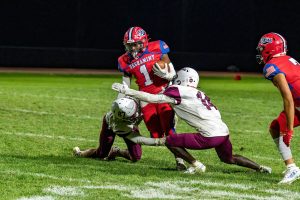 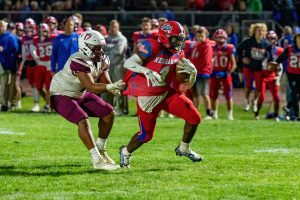 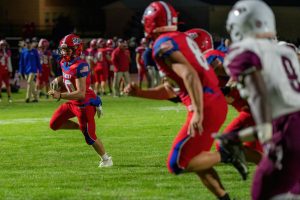 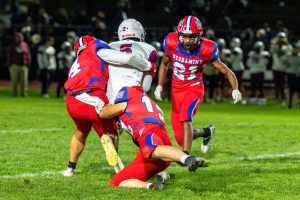 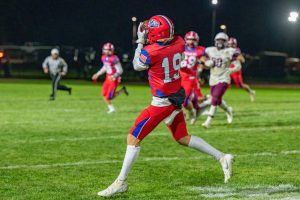 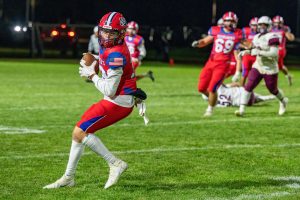 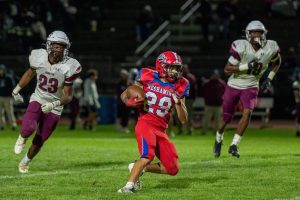 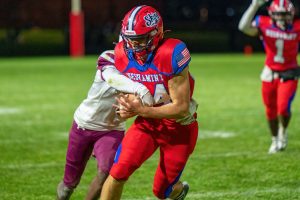 For more game photos go to NeshDad on Smug Mug

For more his work go to Nathaniel Hall Sports Portfolio

Sterling Limo Players of the Week

Colin Baker, Neshaminy – The junior quarterback completed 13 of 21 passes for 160 yards in Neshaminy’s 26-0 win over Abington.

Nick Buchys, Neshaminy – The senior defensive end had another big game, anchoring the defense and contributing nine tackles in Neshaminy’s 26-0 win over Abington 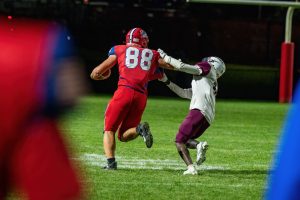 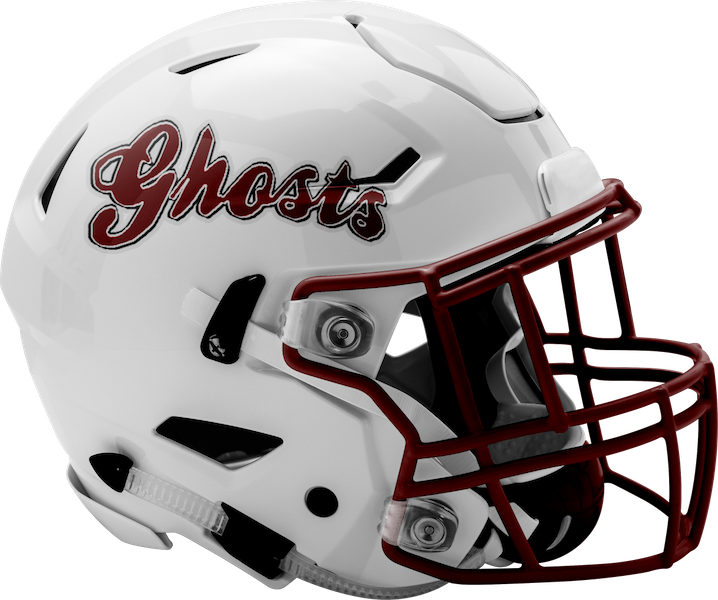