Las Vegas: Okay, okay, okay! First things, first. Yes, it’s me – Paula; I’ve been getting some rest and relaxation before the season and since I was on the coast, I thought I’d see the Wynn’s in Sin City before I head back to Langhorne. Anyway, while I was lying by the pool at the Bellagio, Bob calls me all excited with this bit of news: “Hey Paula, this is gonna be the ‘Skins eightieth season! Whadda think? Cool, huh?” What do I think? Bob, I know it’s number 80. I’m very well aware of the fact that the first year the boys suited up was 1928. So as this is now the “calendar year” 2007 (Gregorian – of course), simple math reveals that this will be the Redskins’ 80th season of football. Yup – the Big Eight Ohhh!

Thinking about it for just a moment, you sure have to agree that it′s been one heck of a fabulous time for us ‘Skins fans (I’ll bet everybody out there reading this article is pretty sure that not only am I going to be thinking about that fabulous time but I’ll be writing about it too – so read on!) 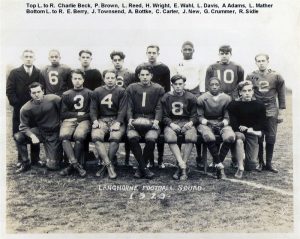 Hmmm, actually, it’s kind of hard to believe it was just 79 years ago that Principal William Thomas decided that Langhorne needed some “ballyhoo” (in other words, a football team). And in case you didn’t know it, it was Principal Thomas that took the bull by the horns “back in the day” and arranged for the first practice; ordered the equipment; had the field behind the school lined out: notified the boys that a grid team was being assembled and, in a nutshell, put the whole shooting match together (including coaching the 1928 team). Plus they did get a game in that first year (just one, but it was the first game ever). Unfortunately, it was a 13-0 loss to Newtown (and maybe that explains why Principal Thomas only coached that one year) but still the die had been cast.

Notwithstanding that “unremarkable” first year, within just two seasons (1930) the ‘Skins finished at 6-2, posting a defensive record still unequalled to this day (3.88 points allowed per game). And several more teams in the depression decade also notched some enviable records and results as well (particularly the 1936, 1937 and 1938 clubs coached by Charlie Beck and directed on the field by Hall of Fame quarterback, Chuck Klein). Following up was the 1940s which saw the first outright LBC championship teams of 1946 and 1947 under Coach Mike DeRisi and with guys like Wayne “Inky” Schneider and Don Kaleda on the field leading the charge.

Then how about the 1950s and – like any of you don′t know – the teams of the “Harry Franks Franchise”! From 1952 through 1959 they built a 69-10-2 record and won 8 straight LBC flags with the 1954 team one of the top all-time ‘Skins teams as they finished 10-0. Anybody recall names like Steve Cloak, Sr., Don Cameron, Bill Fisher, Stan Covington, Tom and Jack Stricker, the Cummings brothers, Harry Schuh and – ahhh, I could just keep going on and on and on.

Enough? Nah. So I guess I’ll have to remind you (or maybe I don’t) of Big John Petercuskie and his bruisers of the “go-go sixties” which saw the Redskins take it to the next level as they put up a 59-1-5 tally from 1960 through 1965 (how about fellows like Baxter, Barr, Brundzo, Carber, Tragemann, Pyle, Colbert and friends – mean anything to you?). And that was 6 more LBC flags for the trophy case (14 straight including the 1950s run) plus some East Penn and Big 5 and 6 league titles too.

Next in line for a nod is Jack Swartz and his 43-11-1 effort from 1968 through 1972 (and who can forget the centerpiece of that pile of jewels – the 1971 “Team of The Century”). In the event you’ve forgotten, do guys like Mason, Emanuel, Forchetti, Traney, Cordelli, McHale, the Srobas and their posse get your attention? And then how about head man Pal Allison and his “Avalanche” including the 1975 LBC champs featuring Jamie Meier, Steve Shull, Steve Cloak, Jr., Walt Freiling, Bob Hayes and Eli Weissman and company. Following closely was Coach Charlie Schmidt and his boys (including Jim Riley, Tom Calkins, Alec Puketza and crew and their 1977 LBC championship team).

The 1980s? How about Dick Bedesem and the 1986 SOL co-championship club (dare I mention the likes of Steve Dorwart, Tim Ford, Chuck Gettis, Bill Vergantino and a host of others). Or what about John Chaump and his perfect 1988 team that finished the regular season 11-0 and made the first ever PIAA 4A playoffs (who could forget Terry Sauerbry, Brian Moser, Mike Frederick, Dan McClave and their buddies). And finally, Coach Mark Schmidt and his arrival in the mid-90s right on through to the present day. Oh yes, 2001 – now that′s what I’m talking about, the PIAA 4A State Champions! And who can forget guys like Joe Szymanek, Jeff McDonough, Jamar Brittingham, Keith Ennis, Jason Wiater, Jay Collins, the Kinney brothers, Kevin Kelly, Doug Rosnick, Andrew Flogel – geez, it would take a page to list all of Coach Schmidt’s boys and their accomplishments.

People, let’s put it this way: there’s a boatload of names and teams I could put down on paper. And you know what? From my point of view that compilation would include every year, every team, every player and every coach – they all deserve to be up in lights. Why? Because each and every one of those “pieces” has been integral in the formation of the great tradition and history of Neshaminy Redskins football program – that’s why.

So, yes Bob – I know all about the last 79 years (and folks, like I said, I could fill volumes). But right now I’ve got my eye on 2007 and the eightieth edition of the Neshaminy Redskins gridiron clubs. And I just can’t wait. So, as my dear friend Michael Buffer loves to say: Ladies and gentlemen, boys and girls ———-

LET′S GET READY TO RUUUMMMBBBLLLEEE!!!!!!!