LANGHORNE: What a wild weekend for high school football – it was really something. Let’s think about it for a moment: Liberty was leading Hazleton in the third, 14-0, and then lost 21-20 when they fell behind 21-14, scored a touchdown and missed their two-point try. Then there was Gateway down 21-7 to North Allegheny with 9 minutes in the game. They tied it 21-21 in regulation and scored first in overtime; Coach Walker then sees his team put 6 on the board on their turn with the ball but the try for 2 is also a bust. Game to Gators, 28-27. And do I need to bring up that 45-38 shootout in Warrington that saw the Titans lose their first – and last – game of the year? But CB South did not go out quietly as they took two shots at the end zone in the last ten seconds of that nail biter. Does it get any better? I don’t think so.

So catching our breath, and before I cover the topic described up above, here’s my statewide round-up of the Sweet Sixteen that are still in the hunt for the Gold in Hershey. First, and starting Out West as I’m in the habit of doing, Pittsburgh Central Catholic was just a little too much for McKeesport, 24-13. And with Gateway taking the other semi-final battle, it’s going to be the solid and complete Tino Sunseri led Vikings versus the ultra-talented and speedy Gators for the D7/WPIAL title. Meanwhile in the other half of that side of the state (the Pittsburgh City/D10 match up), Erie Cathedral Prep will go up against an undefeated Brashear. At the end of the day, though, watch for the D7 champ to step out on top when the dust clears from that group.

Looking to the Mid-State gang, it’s Harrisburg battling Wilson West Lawn in one semi-final battle and Manheim Township digging in against Governor Mifflin in the other. (That tangle of D3/D6 gridiron gangs still sees the smart money on the Cougars but Manheim or The Gov can put it to you as well.) And don’t forget the last man standing of the quad-group will meet the D7/Pittsburgh City/D10 top dawg for the Western Championship.

Closer to home, and Up North, it’s D11′s Parkland going all out against D2’s Hazelton Area (a little surprise with Hazelton knocking off Liberty but it does show that D2 is developing into a force). And of course, in D12 it’s George Washington after they dropped Edward Bok Vo-Tech, 34-6, on Saturday (the Eagles will play the Up North King for the right to play the D1 champ). And as to that last group, D1 that is, there’s a new Fab Four as follows (in alphabetical order): Downingtown West, Neshaminy, Ridley and West Chester Henderson. The Redskins travel to Folsom and the Green Raiders this coming Friday for one semi-final contest while the Whippets visit the Warriors in the other (forget Thanksgiving, just get me to Final Four Friday).

Folks – there you have it; all sixteen schools that are still swinging and with each one hoping they’ll still be suiting up in four weeks; and you have to admit – there’s some mighty talented teams and players in that group.

But enough with the superlatives and cheerleading, let’s focus in on that headline about defenses. The reason I bring this up is although it’s a real treat to have yourself a high scoring machine whenever the ball’s in your hands, having a defense that can keep the other team bottled up sure makes a coach sleep better at night (and if you need some validation for that thesis, just ask the Titans for their two-cents). In fact, I have a riddle for you fine readers. How do you win a game when all your offense delivers is a field goal? Shut the other team out! (Now that was easy.) The point? No matter how good your “Fancy Boys” are (remember those fellows) there can come a time when your top-shelf running back sprains an ankle and comes up short. Or your quarterback is throwing dirt balls (with the wide outs developing stone hands when he does find the target). Or maybe the whole bunch is just having a bad day. Then what? Just like the good old days, it’s time for some defense. (And when you think about, is there anything better than a day-in-day-out defense? Can’t quite decide? How about we call Parkland and ask them about their 7-0 and 17-0 wins over Emmaus, respectively, in week 9 of the regular season and then the opening round of the playoffs. Bet I know what they’ll tell you.)

Okay, pound for pound the clubs that are still left playing can all boast terrific offenses but the real statistic to start drilling down on at this stage of the season is the one that can make the difference – “points allowed”. And there is no doubt that in this case a lower score is better. Hey, with all these clubs capable of scoring, it’s the team that’s capable of shutting off that spigot that comes home with the trophy. So I say it’s been too long since we all took the time to give the defensive guys around the state a “Tip o’ The Hat”; however, before we do that, and with all of you knowing that I’m kind of partial to that school named after a creek (and located on a ridge we all know so well), I can’t resist pointing something out about their defensive men. During the first two playoff games the starters have given up zero points. And in the three games before that (the last of the regular season), the starters have given up just 4 scores. Do the math: That’s 5 games and 28 points which comes in at less than 6 a game on average over that run. As they say in that commercial: Priceless! (And there sure ain’t a better time to see your defense peaking.)

So without further ado – and since I don’t think we hear about them enough – here are Neshaminy’s “Dee Boys” for your viewing pleasure: Jay Colbert, Blair Gower, Chris Gettis, Eric Brown, Mike Hanley, Dan Shirey, Greg Martell, Dave Daino, Dan Lyons, Joe Stemme, Bob Reece, Gary Renson, Ian Capanna and Justin Kinney. How about them boys? Give ’em a hand. And now I want everyone all around the state to stand up and clap in unison for their own favorite defensive groups – all the while chanting the following: Hey defense – if we haven’t told you lately, we love you!

Come on everybody, real loud now: HEY DEFENSE – IF WE HAVEN′T TOLD YOU LATELY, WE LOVE YOU! 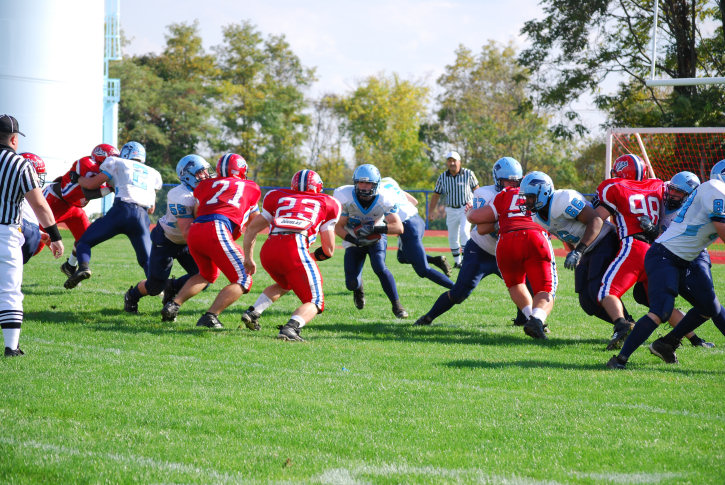 The Big Picture 04 - The Games Are Won in the Trenches