The Big Picture 24 – Some Comings and Goings

LANGHORNE: Can you believe it’s mid-May already! Time really flies, doesn’t it? Course, I think that’s just great as it means the football season is only three months away. And as you all have surely become accustomed to hearing from me this same time every year – thank goodness. For no matter how hard I try, I just never quite know what to do when basketball and hockey are almost over and our only diversion becomes the baseball of early summer (sorry folks, but until it gets down to the stretch run of the season I just can’t get it into it). So that’s why I say “thank goodness” as the one thing that really keeps me going is knowing I’ll be seeing the Blue & Red gridders soon enough! Yup, the Creek Kids; the Langhorne gang, the Redskins – Redskins football (you got it now?).

In the meantime, though, life does go on so let me catch you up on a few items. First, you may have noticed that our intrepid webmaster, Bob, has been doing a little site spring cleaning and rearranging. In fact, he’s squared away the Hall of Fame section and list so that it’s complete and accurate down to the last name and position (and rightly so since the Hall of Fame committee dedicated the revamped “Wall of Fame” last season and took the time to send the site a very long printout with all that very valuable information – thanks guys). 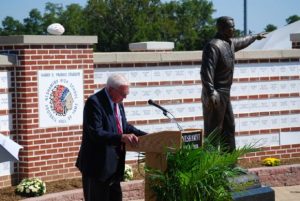 By the way, speaking of the Wall of Fame, if you take a moment to click RIGHT HERE you can see some of the press that was generated last year when they rolled out the spruced up plaza. There are also some terrific photos of the folks that made “dedication day” very special (including John Petercuskie himself). And I remind you all that while you’re enjoying your “visit”, commemorative bricks are still very much available for purchase (you get a couple of lines of text on your own little piece of history which will be preserved for many, many years to come). Plus the proceeds (from buying the brick) go toward reducing the outstanding “note” on the $130,000.00 Wall of Fame project – so why not help out and get your name in lights too (in case you didn’t know, the bricks form the walking surface all around the plaza and memorial area so your permanent little billboard is right in the thick of it).

But back to the point (what Bob has been doing – that point), beside the “Hall of Fame” information, he also brought the All-State page/selections current (he found a few new names from the ’60s that we had been missing) while he added a “Big 33” game section in addition to an “East West PSFCA” game page as well (so now all the Redskins that have played in those post-season all-star contests are right there where you can find them when you need ’em). Needless to say, Bob also brought the 83-year win-loss-tie record current along with the rest of the stuff he does at this time of the year (502 all-time wins looks very good, for sure). So get over to the “History Section” and click on the drop down tab which reads “Player Awards” (the “Blue Box” at the top of this page makes it nice and easy to navigate to that section so you can start there).

So check it out folks (and keep in mind that ol’ Bob puts in a lot of time on the site so when you next see him, yell out a nice big “atta boy” as we all owe him plenty for the non-stop work and effort that is required to produce a nationally acclaimed site dedicated to just one thing – Neshaminy football).

Fortieth Reunion of 1971 “Team of The Century” planned

Now here’s some really big news: The 1971 edition of the ‘Skins (the juggernaut 11-0-0 club that captured two titles, a ton of accolades and our hearts as well) is planning a reunion! A lot of people are saying “it’s about time” while I say “better late than never”. And the rumor is that it is set to coincide with the September 30th Bensalem game this upcoming 2011 season. From what my spies have told me, planning includes a pre-game team get-together up at the high school that will then lead into a halftime presentation and introduction of the squad. Directly following the conclusion of the game with the Owls, there will be a party over at the Middletown Country Club which should be quite an affair. And beside the fact that almost the entire team has committed to attending, Assistant Coaches Pal Allison, John Watto and Jerry Levans are making the pilgrimage too (sadly, Head Coach Jack Swartz passed some years ago and he’ll certainly be missed by his boys).

Anyway, this should be “big” and I can tell you all one thing that′s a for sure – I’ll be there. And after seeing a secret list of the players and other luminaries, well – bring your autograph books. I mean just think about it – the last time “The Team of The Century” was all together on “The Ridge” was in November of ′71 when they took that thriller over the Falcons and banked a perfect season (you also might want to keep in mind that more than one expert has opined that the 1971 team may just be the greatest scholastic grid team in the state of Pennsylvania during the last century – now that is something. By the way, you can click RIGHT HERE to read all about those high flying ‘Skins of yesteryear.

All-Star games and summer camps too

Finally, don’t forget that the Lions Club will be hosting the Bucks County All-Star game in about a month and that’s always worth making the trip (watch for more information on when and where – and which Redskins will be suiting up for the South too). Then there’s the Big 33 in Hershey (and I do believe Corey Majors may be dressing for that one). And Coach Schmidt will be holding his annual camp for the youngsters come July. We’ll post more information on that annual happening once we get the final details. Phew – sure is a lot is going on (as always). So wrapping it up, I remind you that it won’t be long before I can close with: See you at the game – or my favorite: Game to ‘Skins!

The Big Picture 23 - Our Boys of Fall