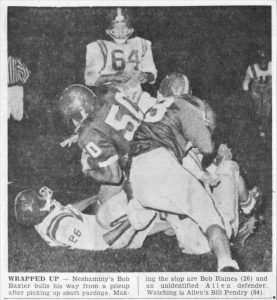 Langhorne: Looking back at this 2008 season so far (especially some of the close games the boys have played), I’m reminded of the many great Redskins teams, players, coaches and efforts of the past. Although the list seems endless, one group that comes to mind is the fabulous 1963 edition of the Blue and Red. Located smack dab in the middle of John Petercuskie’s years at the helm (and the 51 game unbeaten run known as “The Streak”), the ’63ers weighed in at 9-0-1 to do their part in maintaining the 5-year period that still stands as the Langhorne benchmark for such things. But notwithstanding the unbeaten status of the 1963 club, that season was special for another reason. Looking back from today’s vantage point, and knowing a little bit about that group as we do, that was a team that didn’t know what words and phrases like quit, throw in the towel, give up or lose meant. No, not at all, as that was a team that left it all on the field week after week as for 48-minutes each Friday night they battled, fought and played for the win (and what battles and fights they were too)!

But perhaps a little background is in order to help establish some perspective: The teams that preceded the 1963 edition of the Redskins – from 1958 through 1962 – averaged 35 points a game while giving up just about 5 (that was over 5 years and 53 games starting with the third game of the ’58 season). Neshaminy was tough and relentless during that span and only one team had touched them during that time (the ‘Skins overall record was 48-2-3 with the two losses to the Easton Red Rovers – both by a score of 13-7 resulting from late Hail Mary type plays). No doubt, those were fearsome groups, those Tribe clubs of the late 50s and very early 60s.

Then came 1963 – a team “beset” by the wholesale graduation of “stars” except for a very few key players who returned (including the great Bob Baxter). But notwithstanding the need to restock, the team was still expected to perform at the same level and pace as the squads before it. And you know what – they did just that as the final output was the same even though “getting there” was just a bit different than fans of the Tribe were used to enjoying. For rather than one-sided, runaway wins, the final scores were 7-0; 14-13; 14-9; 21-20; 13-0; 13-7; 21-20; 20-6; and, a tie at 0-0 (there was one “big” win at 27-7). Never say die! Never quit! Never give up! That was the attitude; those were the rallying cries; that was the chant of the boys of 1963.

Now all of the foregoing does actually get me somewhere (certainly you’re all wondering what is is I′m getting at – or maybe you’re not). Well, in any event, let me cut to the chase, with that being that the boys of 2008 remind me an awful lot of the 1963 bunch (with both teams hard on the heels of some powerhouse squads and each with enough new faces to stock a 1930s movie studio with leading men for decades but still the mandate hadn’t changed up on The Reservation – just win, baby, just win). And you know what, that’s what the ought-eight crew is doing – winning. And like the 1963 team maybe some of the wins haven’t been as “pretty” or dominating or as one-sided as we all might “think” they should be; however, in one-year, ten-years and one-hundred years, the scores, the caught and dropped passes, the yards gained and lost and all the rest will have been forgotten while just one thing will surely remain as the yard-stick of the grit, guts and determination of 2008 – the Ws and the Ls; the wins and losses.

So folks, let’s remember something, we’ve got a 6-1 club on our hands. We’ve got a 6-1 team that is right in the thick of it – a solid team that is delivering on the field. It’s a team that knows how to win; a team that knows how to shake off a bad play, a bad series, a bad first-half – and yes, even a loss. And that, my friends, is what makes me think of 1963 because the ’63ers were a team that followed that same road (plus there was another ‘Skins team that never quit or gave up – just a few years back, in fact, and if you wonder who they were, go take a look in the trophy case and you’ll see the gold football they earned in a rainstorm in Hershey).