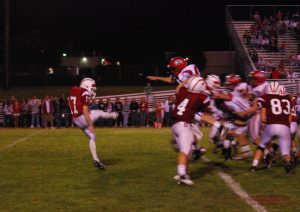 Langhorne: The other night I was sitting around with some football folks discussing this year’s edition of the Tribe’s grid group. And beside the ’08 club, the topic also caused us to look back over some of the Red and Blue squads of the past as our discussion waxed and waned between analysis and critique, on the one hand, and fond remembrances and nostalgia on the other. Eventually we found ourselves at a point where we were hanging “personalities” on teams – you know, descriptions like “scrappy”, “tough as nails”, “over-achievers”, or “come back kids”. Then as the evening wore on, we began to wonder how the 2008 eleven would be recalled some day – this latest Redskins squad that has so captured our attention and devotion. And hard to believe too, isn’t it, that in just a scant three months a “brand new” group we barely knew in August now seems to be all we care about.

Still, and like we were considering, each team seems to generate its own moniker or cachet, a phrase or turn of words; its persona, so to speak. And for 2008 what kept coming up was “get”s the job done”, “workman like”, “efficient”, “no nonsense”, “by the book” – stuff like that. Then it hit us! These guys are like that Rock of Gibraltar neighbor who lives next door to each of us. The guy who gets up and goes to work every day and comes back home at exactly the same time. He has dinner with the family and then plays catch with the kids. He gets his paycheck on Friday, pays the bills and then mows his lawn on Saturday. As safe a bet as the sun rising in the East and setting in the West.

Then like a bolt of lightning we all yelled out at the same time: “The lunch pail bunch” – yup, that′s our 2008 Neshaminy Redskins team. Rock solid, dependable, practical, no complaints and step one, step two and step three kind of guys. If it′s R-44 on two then it′s R-44 ON TWO. If practice starts at 3 o’clock then it′s 3 o’clock – not 2:59 and not 3:01. If the game is 48-minutes long then that’s how long the game is played: 48-minutes. Punch your card on the way in and punch it on the way out. They don’t try to blind you with flash, they just do their jobs. For them it’s all about making the blocks and tackles; gaining the yards and catching the passes. Do it by the books – PERIOD. 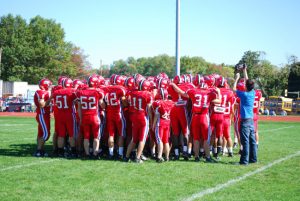 In fact, the more we dug into this club’s psyche we developed the distinct impression they’ve known this all along. This group of “no names” that came together to form a team that goes out and wins the old-fashioned way – they earn it. Week in and week out, up or down, behind or out in front, they don’t get rattled, they don’t break a sweat and they don’t change the tempo, the approach or their core style of play and fundamental approach to the game. And guess what? That’s what wins football games. That ability to take each week, each day, each hour, each minute – each game, each play, each assignment, each block, tackle, run and pass and do each one of those “things” the same. Over and over and over. Each one of those little elements, those little bricks and boards and nails and mortar that, when all assembled, build one heck of a fine, sturdy, safe and strong house and home. That’s our 2008 Redskins – that’s what they are all about.

So – hey you Redskins, you guys know who we’re talking about: Titus, Q “The Mini-Bus”, Carrezola, “James” Dean, Biundo, Wynne, Orr, Schaeffer, Shirey, Brebner, Donnarumma, Colbert, Reedel, O′Neal, Knorr, Williams, Boland, Greene, Majors, Wenclewicz, Simpson, Jeffries, Bailey, Zavorski, Auerbach, Gawlinski, Burcz, Manigrassi, Adams, Kellett, Marterella, Kervick – all of you guys whether you are a first teamer, a second teamer, a bomb squader or whatever – each and everyone! We salute you and we thank you each for the work, effort and sacrifices you all have made this year to put together one fine, fine team. Yes sir, a Redskin football team that all of us are proud to say is our team – “The lunch pail bunch!–

The Big Picture 12 - The Tribe