The Big Picture 12 – The Tribe

Langhorne: Watching this year’s team, this terrific group of young men that have come together in such a positive fashion over the last three months of games, I started thinking about who they are and what they represent; this year’s club, this latest “tip of the spear”. And as visible as they are right now; as evident, current and out on the field each week, it’s a fact that they are a great addition to “The Tribe”! Of course, that lead to another thought which was “what exactly is ′The Tribe′ anyway?” Then since I’ve been asked that question so many times – by so many people – I decided I ought to give that answer a shot. So I did. Still, it wasn’t that easy, and after several days of pacing I seemed to be going nowhere; however, just when I was ready to throw in the towel, I got it – I believe I got “The Tribe”.

Needless to say, the next task was to set it down on paper. You know, describe it in great detail so that for all time that work would serve as the definitive source a– the end all and be all; the place to go when you needed to know. But after reaching page 11, I realized I’d never get it done (heck, just the names of all the people that deserve recognition would fill a book). Nope, it became obvious it needed to be distilled down to its essence, the core story. So that’s what I did and directly below is that version – the short version:

“The Tribe” is 80 years of Redskins football teams; it’s 2,000 players and 4,000 moms and dads and 8,000 grand moms and grand dads. It’s 1,000 cheerleaders and 4,000 band members and majorettes. It’s 809 games played against 100 different opponents. It′s “Heartbreak Ridge”, it’s the red, white and blue school and team colors. It’s 18 head coaches and countless assistant coaches and trainers. It’s all the school board members, principals, athletic directors, teachers, administration, grounds keepers and staff who have served the district and community over the years. It’s 50,000 student alumni now spread all around the world (still following their team); it’s the one million people who have filled all the stands and watched all the games since toe met leather in that first kickoff of the inaugural grid contest in 1928. It’s the words heard every Friday night before a game in Langhorne as the team pours out onto the field: “Look to your left fans, here come your Neshaminy Redskins!” And most importantly, it’s the cheers and claps and screams of support of the fans for the boys on the field in each and every game they play.

So that’s “The Tribe” – that’s exactly what it is. It’s all that spirit, wisdom, attention, devotion, work, effort, will and love of the people of the Redskin Nation – all melded and molded together into something we all have come to call “The Tribe”. And as I said at the beginning of this brief article, it just got a little bigger as there′s a new group in the mix: The boys of 2008. Yup – this latest team that we couldn’t be happier to have joining us because it makes our family that much stronger and that much better. So welcome aboard guys – welcome aboard all you young men of this year’s 2008 Neshaminy football team. 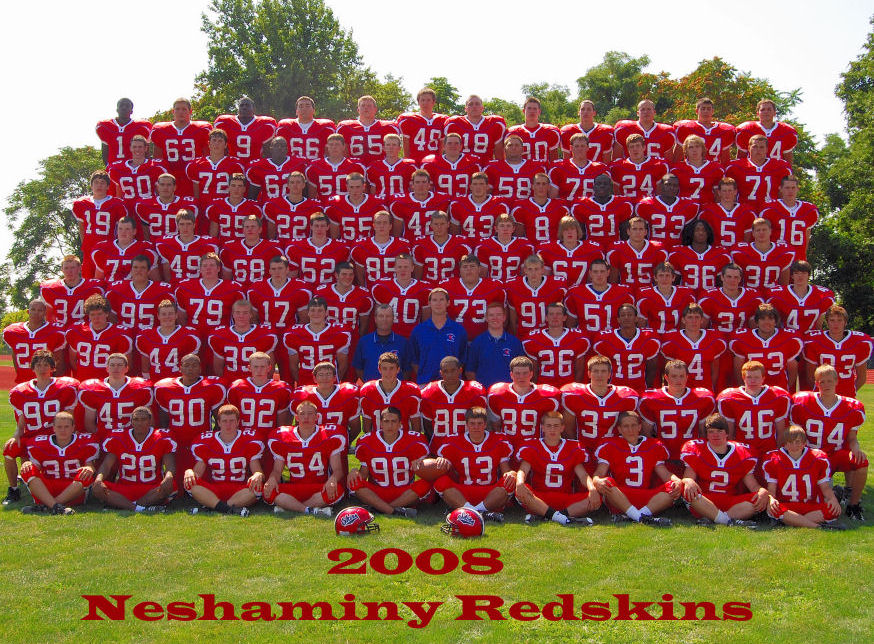