Langhorne: Okay folks, after a few days of feeling a little down in the dumps because the season came to an end last Friday night, I thought it might be nice if we took a hard look at the boys and their team of 2008. You see, after everything they accomplished this year, I was pretty sure if we dug down a bit we’d see there′s plenty to cheer about. So that’s what we’re gonna do – right here and right now!

First, on Friday November 28 they were one of the last eight AAAA teams still playing for all the marbles. And I’m talking about throughout the whole state – out of the 150 schools or so that started the year at the 4A level it was just the ‘Skins and seven other clubs still suiting up. Not bad, not bad at all.

Second, they finished the year at 12-2 and played a total of 14 games in all. Maybe we all ought to keep in mind that in 81 years only the 2004 Tribe team played more at 15 while just one other group, the 2001 state champions, played as many (one of the wins that year on the way to Hershey and the gold was the forfeit win over Bensalem so technically they didn’t “play” that game). Plus those were the only two teams they had more wins (13 in 2004 and 15 in 2001). Not bad, not bad at all.

Third, they banked the SOL – National Conference crown (and they were the first Neshaminy club since 2005 to bring the trophy to Langhorne). Not bad, not bad at all.

Fourth, they were also the first ‘Skins squad to earn a ticket to the District One title game since the 2004 group. Not bad, not bad at all.

Fifth, although three months ago you might not have recognized names like Biundo, Donnarumma, Dean, Brebner, Majors, Titus, Bailey, DiDonato, Orr, Manigrassi, Greene, Gawlinski, Schaeffer, Knorr, Burcz, Boland, Williams and Jeffries, while other names like Carrezola, Zavorski, Shirey, Colbert, Wenclewicz, Reedel, O’Neal and Arnold were a little bit more familiar – now they’re household favorites all over the school district (and a bunch of them will be back next year too). Not bad, not bad at all.

Sixth, they entertained us for three months – providing us with 14 games and 56 quarters of football. They never quit and they showed plenty of grit, guts and determination all season long (think Hatboro-Horsham, Abington, Council Rock South, Pennsbury and Garnet Valley and you′ll realize they sat plenty tall in the saddle). Plus even though the last game didn’t go exactly the way we “planned”, anybody in the stands knows it wasn’t for a lack of good, clean, hard hitting ball and unfailing effort by the Redmen. Not bad, not bad at all.

Seventh (and because I like to end on “Lucky Seven” this will be it), over the last three months they became part of our family; part of the long line of great Redskin grid teams; and part of the proud history and tradition that is Neshaminy football. In fact, watching them play the game, watching them tumble on the field each week, watching them gain yards, throw and catch passes, score touchdowns and jump for joy whenever they did – well, you have to admit you do get a little tear in the eye now that it’s all over. And that ain’t bad, not bad at all.

So to the 2008 team: We thank you for everything you gave us all season long – and we salute you as well for a job well done! 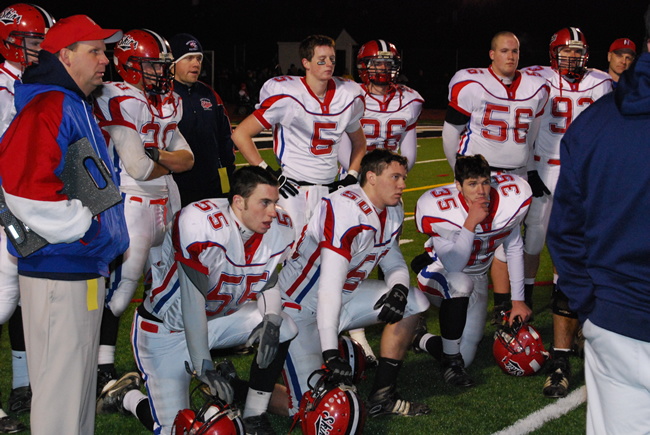 The Big Picture 12 - The Tribe