LANGHORNE: The 2009 football season, that′s what’s “in the air”! Yup, with the cobwebs dropping away and summer upon us – plus some scholastic grid all-star games coming up – there’s no mistaking the fact that in just a few short months it will be preseason practice time with the kickoff of the first game of the ′09 campaign not far behind. And if you’re like me, I know you can’t wait.

But in the meantime, let me catch you all up on what’s been going on (or what’s about to go on). Course, in case you’re wondering, I’m just fine. Thank you for asking. I’ve been “resting”; taking some time off; getting my batteries recharged for the football “goings-on” that are just around the corner. Uh-huh, I’ve been floating on a raft in the just cleaned and topped off pool. Not! Actually, I’ve been pacing the floor looking at the calendar and my watch – counting the months, weeks, days, hours and minutes till the ‘Skins come running down that little hill and get “The Ridge” rumbling once again. And although it seems like forever till September gets here, there’s a few diversions over the next 12 weeks to help pass the time (so all is not lost). 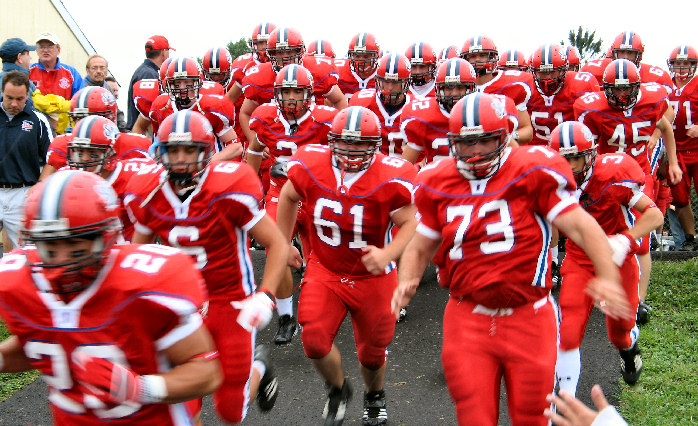 For instance, we have the Bucks County Lions North-South all-star game being played at 7 PM on Saturday June 6 at War Memorial Field in Doylestown. Neshaminy has eight players suiting up for the South including Fatorna Greene, Devon Reedel, John Zavorski, Dan Wenclewicz, Justin Donnarumma, Nick Schaefer, Cody O′Neal and Chris Boland. And there′s also the PSFCA East-West game on Friday, June 19th at Mansion Park Stadium in Altoona with the Big 33 game set for Saturday, June 20th at Hershey Park in Hershey. Redskins’ players who will be pulling on a game time uniform for the last time as “high school” athletes at these contests include Dan Shirey and Jay Colbert, who are on the Big 33 roster, and Paul Carrezola who will be featured in the East-West classic. So if you have a free evening on one of those dates, get out to a game and have a little football watching fun in the next couple of weeks (and let’s start if all off by seeing a nice crowd of ‘Skins rooters in Doylestown).

Plus out in cyber-space it’s time for the Jimmy Chitwood All-Time Cyber Playoff featuring one of our favorite clubs – the 1971 ‘Skins – versus the 1987 North Hill Indians. Seems the ’71 guys copped the PA Football News All-Time PA Computer Playoffs while the Indians snagged the Jimmy Chitwood site’s version of a computer-played grid slug-fest. This game is for all the bragging rights and it should be a doozy. I know you’re interested in this one and you can find out more by clicking http://www.JimmyChitwood.com/High_School_Football.php – check it out (and make sure you have your speakers working as the Chitwood site has a great tune blaring out the invitation).

Plus talking about the “old days” (I suppose those are the “old days” – 1971, that is), there′s a new site called “LBCL Online” and it’s all about the “old” Lower Bucks County League (football) which was numero uno in Lower Bucks from 1935 through 1981. The site is still undergoing some “construction” but there’s still some great information already assembled over there. Bob has a link to it on the site’s “football links” page (naturally) so that’s something else you can spend an evening enjoying (click here to get yourself over to the “links” page).

And while we’re on the topic of the Neshaminy Football site, you’ll notice Bob’s been busy sprucing it up over the last few months. In fact, he’s got some new “stuff” including a list of all the Moleskinners who were selected all-state over the years – just click HERE and you’ll be able to read all about the history of those squads and the Neshaminy players who were so honored over the years. You’ll also note that Bob also has the entire regular season “recap section” pre-arranged and just waiting for the game stories and pictures. Plus he also worked out a renewal for another year of Ed Thomas’ Pre-Season and Weekly Top Ten Picks. No doubt that Ed is everyone’s favorite grid prognosticator while he gets my vote as the all-around, number one Pennsylvania scholastic fan – PERIOD. Between you and me, if there’s a better historian, writer, fan, analyst, etc., I sure haven’t found him.

On another note that puts a little tug on our heart, and for those of you who might have scooted around as a pee-wee gridder for the Queen of The Universe Knights back in the ’60s, the name Lou Merlano might ring a bell. In fact, for just about anyone who has lived in Middletown Township and the Neshaminy School District for the last 30 or 40 years, that name should also cause a mighty bright light bulb to go off. In the event it doesn’t, Lou was a pillar of the community in every way possible. Sadly, he passed a few years back but his children have helped establish a scholarship fund in his honor which benefits Neshaminy and Conwell/Egan students (you got it, Lou’s kids were ‘Skins and Eagles). You can get some information by clicking on http://www.lpmscholarshipfund.com/supportthefund.html (that’s information on the scholarships plus a couple of golf tourneys that are coming up soon – so get out on the links if that’s your game and help a worthy cause at the same time). I might also add that John Petercuskie is on the fund’s Advisory Board and that pretty much makes it an order that you help out. 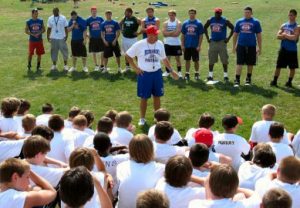 For the younger footballers, Coach Schmidt is holding his summer day camp once again this July. If you′re interested call Neshaminy’s athletic office and you can get all the details you’ll need for this terrific opportunity for the youngsters to get an early idea of what it’s like to get out on Neshaminy’s grid fields. Plus they’ll get a chance to receive some top-flight instructions on the game while meeting current and former players and having a good time too. And speaking of Coach Schmidt, this will be his 15th season at the helm of the Redskins grid club and that will give him the “record” for most years at the top (Head Coach Charlie Beck logged 14 years in the hot seat from 1929 though 1942 so I’d suspect it was about time for a new name). Additionally, with this “honor” Coach Schmidt will soon be able to lay claim to not only “most seasons” coached but also “most games” coached, most wins, most trips to Hershey, most all-state players, most this and most that – in other words, almost everything that you can put in your quiver. So hey Coach: Congratulations! 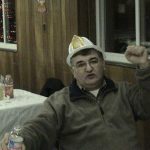 Another happening of note as well is that Bucks County now is a chapter of the Pennsylvania Sports Hall of Fame. And that’s in large part due to the work and effort of former Redskin football head man, Coach John Chaump. Thanks to his dedication to this project over the last couple of years, the group’s first banquet was held just within the last few months when its first “class” was inducted. Some of Neshaminy′s football greats who made the list include John Petercuskie and Harry Schuh. Additionally, Neshaminy – and Bishop Egan – head Coach Dick Bedesem was in the group as were Walter Bahr, Hal Hefflinger, Sheila Murphy and Joel Baba (and I don’t think it’s necessary to highlight any of their careers as those are names that do not need an introduction). Another favorite of ours who was also inducted, and not a Neshaminy family member as such but rather a great friend, was Dick Dougherty of the Courier Times. His writing as the Sports Editor of our local paper entertained all of us in Lower Bucks for many, many years. And hey Coach Chaump – thanks for getting this baby off the ground (it was long overdue and we appreciate what you helped to accomplish).

Finally, how about I give you all a little inside “info” on which teams are already getting some ink as preseason favorites? Nah – I think I’ll roll out those names in a few more weeks when I post another summertime update. But in the meantime, and like I said up top – it’s in the air. So we′ll be seeing you soon enough and enjoy the summer.

And how about I close with this: See you at the game (nice)!