The Big Picture 07 – Back to the Future

LANGHORNE: First of all, let’s make one thing clear (from my perspective); thank goodness the high school football season is just about to get in gear! This waiting around for 8 months is just way too long. Basketball, hockey, baseball, tennis, Ultimate Fighting, European/World Cup soccer – hey, they’re fine and all that but there’s nothing like the sound of toe meeting leather to signal the start of a scholastic grid game under the lights on a Friday night. Well, maybe there’s one sound that′s a little better with that being: “Look to you left, ladies and gentlemen, it’s your Neshaminy Redskins!”

Plus speaking of your Neshaminy Redskins (like I’d be speaking of something else), the word is the boys have spent the off-season not only working out in the weight room but on the track too. The result, so I hear, are plenty of big, strong and fast ‘Skins just raring to get the season started (that’s a nice combination for a coach to have to wake up to). In fact, I’d say you can bet Coach Schmidt and his boys are straining at the ropes now that the season is just around the corner.

Okay, let’s get back to the title of this “feel-good” article as you might be wondering where I’m going with the Back to The Future title. That’s easy. It’s the realignment of teams in the Suburban One League. Yup – if you look long and hard at the reconfigured National Conference you just might realize the world has gone full circle. In other words, the powers that be have taken us all right back to where it started: The “old” Lower Bucks County League. And in case you fine folks might not recall the LBCL, let me provide a little history for you.

Let’s start by putting on our time traveling glasses and looking back to the early days. The Lower Bucks County League, which was formed in 1935, consisted of the following teams that first season (the year each school started playing football is in the parentheses just after its name): Bensalem (1930), Bristol (1919), Fallsington (1930), Langhorne-Middletown (1928), Morrisville (1919), Newtown (1919) and Yardley (1930). As it was, Bristol and Morrisville were pretty much the top teams during the very early days as they were the major population centers of the area. And as to the make up of the LBCL, although those schools were the charter members, there were plenty of changes over the following half-century. In fact, when the ‘Skins snagged their first LBCL crown in 1946, Bensalem, Newtown and Fallsington had each opted out for a few years while Yardley was also gone (they actually had a nickname for the LBCL at that time which was “The Big Three” referencing just the 3 schools – Bristol, Langhorne-Middletown and Morrisville – then playing each other for the title). 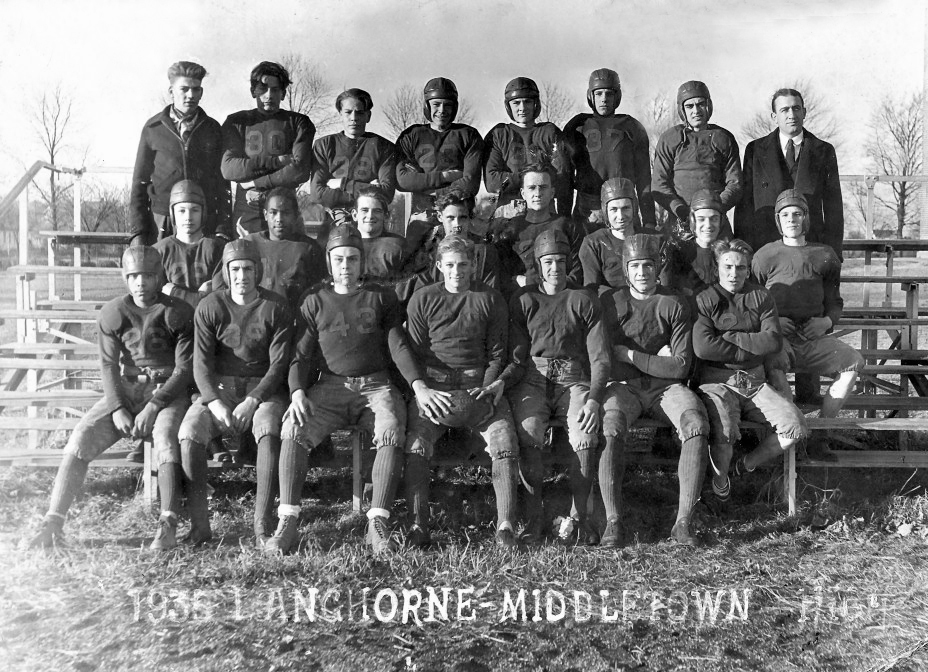 Moving right along, the next year of 1947, when the Tribe once again pocketed the trophy, Bensalem was back in the league as a member while by 1949 Southampton (which started playing football in 1944) had decided to join the conference. And I should add that by that same year of 1949, Yardley had completed its merger with Fallsington and the newly reconstituted school (which was then called Pennsbury) was back in the league along with Newtown whose name change to Council Rock had also by then been completed. So keeping that in mind, the teams heretofore mentioned can be considered the “core” schools of the LBCL.

Fast forward to the late-1950s and “things” began to take on a little different look, though, as the population explosion after the end of World War II had the LBCL fattened up to include Bensalem, Bristol, Council Rock, Delhaas (a Bristol Township school which first put on pads in 1951 and which had joined the conference in 1953), Morrisville, Neshaminy (formerly Langhorne-Middletown as we all know), Pennsbury, William Tennent (formerly Southampton) and Woodrow Wilson (a Levittown based school located within Bristol Township which had initially suited up and joined the league in 1959). Additionally, by the end of that Eisenhower decade, the “shift” of population also saw a “shift” in power. In response, the league was split in 1961 resulting in the LBCL – Section I and LBCL – Section II. The “Big Boys” in Section I were Neshaminy, Pennsbury, William Tennent and Woodrow Wilson. As to Bensalem, Council Rock and Delhaas, they were on the cusp for a few years in Section II before eventually coming over to Section I by the late 1960s. Meanwhile, Bristol and Morrisville became permanent members of the small school division.

Finally, in 1976 the Section I and Section II split arrangement was discarded as the small schools became part of the Bicentennial League. As to those remaining teams (and a new one), the conference name again became simply the Lower Bucks County League with its members then being Bensalem, Council Rock, Delhaas, Maple Point, Neshaminy, Pennsbury and Woodrow Wilson (William Tennent left the league after the 1970 season). Delhaas and Woodrow Wilson then merged after 1980 so for the 1981 season of play Harry S. Truman both came into being and into the LBCL too. Of course, Maple Point was the other half of the “split” Neshaminy School District which was effective for the 1975 through 1982 seasons (and notably, Maple Point was not a member of any league in its first year of 1975 playing as an independent that season as well as its last of 1982 while after it was closed, the District went back to just one team – the Redskins). 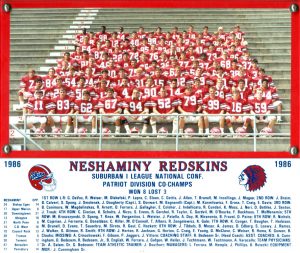 But as to the LBCL, the times they were “a changing” and starting with the 1982 campaign (after 47 years of ruling the roost) the LBCL was disbanded completely with the Suburban One League becoming the new “King of The Hill”. And now for over a quarter-century that’s been the league that has controlled the local football scene. Still, even with one “master league” there have been a number of different arrangements and names for its various divisions and conferences for the 24 member schools (the ‘Skins have already “played” in the SOL, National Division; the SOL, National Conference, Patriot Division and, finally, the SOL, National Conference). When you think about it too, with the teams in the SOL scattered throughout Bucks and Montgomery Counties, the latest change is in keeping with the “tweaking” that seems to make sense to the administrators every so often. 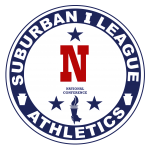 So as it now stands, with the Suburban One League still the overall name, but with the National Conference arrangement as indicated, the ‘Skins are returning to their roots. Thus, the “new” league consists of Abington, Bensalem, Council Rock North and South (the “split” came in time for the 2002 season), Harry S. Truman, Neshaminy, Pennsbury, and William Tennent. Pretty obviously, and other than Abington, that′s the LBC – Section I arrangement that the ‘Skins were competing in during the latter part of the 1960s (with the league’s roots traced back to just about the first years that the Tribe had donned its war bonnet in the 1930s). And just so you’ll know I’m paying attention, it also reminds me of the National Conference, Patriot Division arrangement of the late 1980s too (I guess some things just never go out of style).

So now you get it! It’s Back to The Future on the silver screen and for Lower Bucks County scholastic grid fans as well. And although we’re sorry to see some favorites like North Penn and Pennridge out of the regular season, look for match ups with the Knights and Rams in the playoffs. Plus, folks are saying that the traditional season-ending game with the Falcons may just take on that monumental importance it once enjoyed during those titanic struggles of the 1950s, 1960s and 1970s (as if that game ever wasn’t monumental in it’s importance to the players in Langhorne and their counter-parts in Fairless Hills). And when you think about it, the chance to “go home” and revisit the days of our youth is always a treat and the new league arrangement will see plenty of old friends stopping by Heartbreak Ridge as long-standing rivalries are rekindled and celebrated once again.

A Quick Look Around the State

I know everyone out there is wondering which teams are looking to make some noise this upcoming season. And since I wouldn’t dare let you fans down, here’s a few names the experts and geniuses have said we all should keep an eye on in 2008.

Starting off with a look Up North to the Lehigh Valley area, the Parkland Trojans, Liberty Hurricanes and Emmaus Hornets are each attracting plenty of buzz. As to the Mid-State region, Bishop McDevitt, Central Dauphin and State College deserve consideration while the Harrisburg Cougars look to be back as well. Then Out West in the Steel City and WPIAL sector, you have to keep an eye on Gateway, North Allegheny, Penn Hills, McKeesport and Pittsburgh Central Catholic. In other words, the “short list” hasn’t changed too much from last year with just a surprise or two to keep things interesting.

Finally, a little closer to home here in Southeastern PA, (and that’s D1 and D12), you have any number of teams that can jump up and take a bite out of your hide but if push came to shove you′d have to think that Coatesville, Garnet Valley, North Penn, Pennsbury, Ridley, St. Joe’s and Cardinal O’Hara are some favorites. And a few other clubs that could be coiled springs would have to include Council Rock North, Central Bucks East, Central Bucks South, Haverford, Souderton and Hatboro-Horsham while you can’t help but think that one of the Downingtown teams will be in the mix too. Oh, and as if I had to mention them, the group that wears the Blue and Red and plays up on the Ridge is also generating plenty of preseason excitement as well. Course, we all know that predictions are nice but since the games are won on the field, the season is ripe for the taking by any team that wants it.

So in conclusion, and as I said at the opening, thank goodness the season is here as I couldn’t have waited much longer. And to all the schools and their teams; the coaches and players; the cheerleaders, students, parents and fans — I’m sure we’re all in agreement with my closing comment: