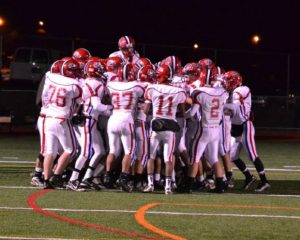 Langhorne: By the time you’re reading this there will be less than a month till the ‘Skins kick off the 2012 season. And personally, I’ve been counting the days since 2011 was put to bed so I’m more than ready. Plus besides the excitement of a brand new year, the Blue & Red also has a first-time-ever game against Northeast High of the Philadelphia Public League. What a great thrill and treat for the Creek Kids and us loyal fans as they open the season with such an historic program as the Vikings.

Here’s a quick history lesson: Northeast first fielded a team in 1892 and has been a member of the PPL since the league was formed in 1916. And not just twiddling their thumbs, the Vikings have spent the last 120 years showing that they′re one of the top Philadelphia scholastic grid programs (their first PPL title was in 1917 and their last in 2010 to give you an idea while as to “talent”, Herb Adderley is an alumni). Yep, this should be an exciting opener as Northeast looks to be solid as they come this year.

Plus speaking of excitement, we’ve been hearing there’s plenty over on the reservation with nothing but good things being said about this year’s team. Apparently the boys have been pounding steel all summer long, running wind sprints and steps till they drop as well as participating in those “skill displaying” 7 on 7 events with the word being that they’ll be ready on August 31. And not only August 31, but all season long too with a full schedule on tap including Souderton, the “Rock” schools, Abington and Pennsbury, to name a few, all ready to bring their best. What a year it’s gonna be!

In the meantime, what else has been going on all summer?

Schmidt in PSFCA Hall of Fame 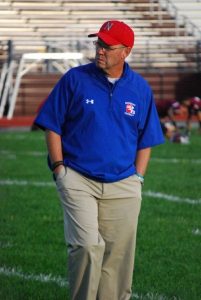 In case anyone didn’t notice (and it was awfully hard to miss), our Coach Schmidt was included in the Pennsylvania Scholastic Football Coaches Association’s 2012 Hall of Fame class! With the ceremonies held at the half-time of the Big 33 contest (which also featured one of Neshaminy’s 2012 graduates on the field, Temple bound Kiser Terry), Coach Schmidt joined a most distinguished group of men who already have their pictures on the wall or who were inducted this year too. And with an overall record at Neshaminy of 139 and 60 over his 17 seasons, Coach Schmidt has pocketed just about every record a Redskin football coach can (and what he’s given the program and school off the field is just as impressive). Congratulations Coach – you deserve this recognition.

As a side note, here’s a “Fun Fact” for everyone: Coach Schmidt is the third Redskin head man to earn Hall of Fame status. The other two are John Petercuskie and Dick Bedesem (and we’re checking to see if any other school in the commonwealth has three men that have been so honored – we’ll have to get back to you on that one). 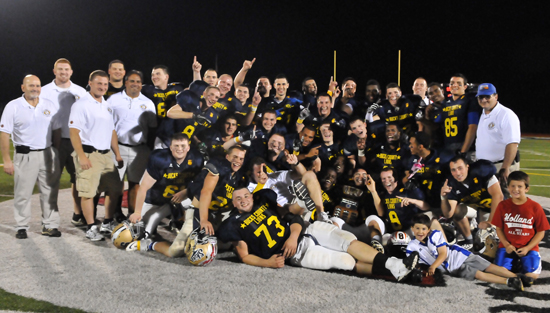 With six Neshaminy players on this year’s South squad, the 2012 slugfest, a low scoring affair, was all about defense as “our” guys eked out a 13-6 victory. But a win is a win and with the players from Langhorne including Joe Bianchino, Sean Ulmer, Bobby Marterella, Tadas Karusevicius, Chris Kutsubos and John Bell, we note that Bianchino pitched a touchdown pass while Ulmer picked up a ground score (nice work by the ‘Skins offensive crew). Plus Ulmer earned MVP honors for his efforts. A great job by our boys and the whole South squad (and all for a worthy cause and a game which has been played continuously since its inception in 1972). 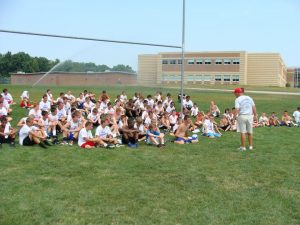 Coach Schmidt and his crew just held another very successful summer camp for young footballers during the week of July 16th. With the five-day event featuring current and former players (Kevin Kelly and Doug Rosnick stopped by, to name a few), college coaches and luminaries, and a visit by Neshaminy′s Principal, Dr. Rob McGee, more than 100 young players came to have fun, learn football fundamentals and meet the many Redskin players and coaches who help make this annual event so great. Just think of the great memories the kids take home with them each year in addition to the dreams they’ll have of their time to come on “Heartbreak Ridge”.

With the “Wall of Fame” completely refurbished a few years back, including a life-size bronze statute of John Petercuskie placed just in front of it, what could the Hall of Fame Committee do to top that? Well how about adding the bronze “heads” of four of Neshaminy’s greatest coaches to the corners of the “Wall”. That’s what they’re doing and here’s the list: Harry Franks, John Swartz, Dick Bedesem and Pete Cordelli, Sr. That’s quite a “staff” I′d say! The installation will be this September. And you can CLICK HERE for more information on this latest addition to the beautiful plaza that has been standing guard at Harry Franks Stadium for some 25 years. You can also learn how you can help defray its cost by having your own inscribed commemorative brick plunked down in the plaza for all time (so take a look).

Year after year – does it get any better than this?

I have to tell you; sometimes I get a little misty eyed when I think about how fortunate we are. With so much going on in the world that at times tries our souls and makes us wonder, at least there’s one thing that seems as dependable as the sun coming up and often is just the antidote to keep us going. And that’s Neshaminy football. With the ‘Skins putting a team on the field since 1928 (this will be season number 85 if you’re counting), the program is a real testament to the many great men that have led the team year after year; the school at large and its student fans, the administrations and the community which have all backed the many teams over the decades; and of course, the players – the couple of thousand young men that have dedicated a significant portion of their high school years to give us fans so much enjoyment. Sure it’s just high school football but in my book there’s nothing better or more fun.

Well, I suppose that’s enough for now. So back to the beginning of this little write-up, I’m looking forward to seeing you all at 1601 Cottman Avenue at 6:00 PM on August 31 for the first game of the new season. And here are two words to hold you till then:

The Big Picture 26 - Coach Schmidt in Hall of Fame