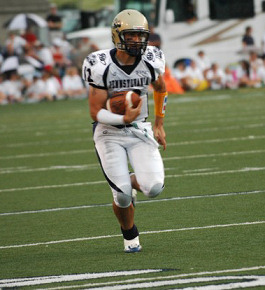 CONCORD: Thought I’d take a moment to drop everyone a note so you’ll know I’m still here (I am and I’m fine). And in case you’re wondering what I’ve been doing lately, rest assured that just like all of you, I’m counting the days till the season kicks off. But in the meantime, and besides checking in with everyone to say hi, I also wanted to acknowledge all the players and coaches who participated in the 33rd annual Bob Sands All-Star game that was held a couple of weeks ago at Harry Franks Memorial Stadium. Nice effort fellas! And, the fact it was a “home” game in Langhorne – featuring our own Coach Schmidt at the helm and a slew of ‘Skins suiting up one more time on The Ridge – made it just a little more special (the 10-7 South win wasn’t bad either). Plus while we’re on the topic of All-Star games, the fact the PA bunch stopped Ohio, 31-16, in the Big 33 game deserves a “Tip o’ the Hat” too. Way to go guys!

You know what, as long as I’m here (and while we’re all killing a little bit more time till August 29) I ought to mention that there’s a terrific football “site” to keep an eye on for all the football news that′s fit to print – and that’s all year long too (of course, that’s only after you’re done checking through the Neshaminy site first – wink, wink). Anyway – back to the point here, the other site (and I should add that it is one of my absolute favorites as well) is none other than www.PAFootballNews.com – now that’s what I’m talking about. For off-season updates and then all-season long news, scores, stats and rankings, you just have to stop by for a visit (and you can get there on the “Football Links” tab on the menu bar so it couldn’t be easier). And while I’m at it, I’d be remiss if I didn’t add that Tom Elling and Rich Vetock (the guys who make PA Football News happen) are true friends of the sport of scholastic football. So get yourself over for a look-see.

And while I’m on a roll, there are a couple of other brand spanking new “must see” sites that have popped up recently. The first one to get up on your screen is www.PAHelmetProject.com. Guess what – just like it reads, it’s all about Pennsylvania high schools and their football helmets. You read that right, my friends, football helmets. So if you’ve ever wondered what the Carlisle Thundering Herd bonnet looks like or maybe the Erie Cathedral Prep Ramblers (or how about the Penn Hills Indians), this is the place to spend some of your trivia research time. Check this – they’ve even got the reverse side as well (think Abington). No doubt about it, the site administrator (George Matthews – take a bow sir, you deserve it) has done a terrific job on this site. So folks, have yourselves some fun on “The Helmet Site”.

Finally, there’s one other interesting new site to check out – www.PAStateFootballChampions.com (which, like the “Helmet Project”, is all about what you might think it would be – Pennsylvania state champions). And this one is going to knock your socks off as they′re making a list of teams that have played and competed in Pennsylvania back to 1886 (that’s right – 1886) and are now in competition for the title of “State Champion” (it appears the playoff years of 1988 to present are pretty much set – obviously – so the nominees will be for 1886 to 1987). Anyway, the goal is to identify the state champion for each year (along with a couple of honorable mentions) for the last 121 seasons – now that is something. I might also add that our beloved Redskins have got themselves in contention for 7 of those seasons so far (and it’s safe to say 2001 is a foregone conclusion). So take a look and send the guys in charge a note if you have a suggestion or comment (I’ve also heard there may be a voting process that will include the fans around the state – so stay tuned).

And as an added bonus, the champion’s site will also include local and statewide updates from time-to-time during the season by Ed Thomas. I′m sure you’re all familiar with Ed’s highly detailed and “spot on” assessments and rankings for teams here in the southeastern part of the Keystone State (and we understand he’s involved in the selection process too which is terrific as Ed’s a guy who definitely knows what he’s talking about). I should also add that he’s a great friend. And the fact he’s tossing his considerable expertise in with the group that’s working on that new site is the icing on the cake for an idea and project that was long overdue (and if I didn’t mention it, Tom and Rich from Pa Football News are behind the scenes too which seals the deal in my opinion). 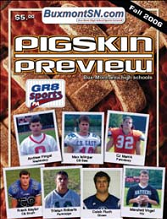 One more thing that deserves mention: The BuxMont Pigskin Magazine. Yup, I’m talking about the Rick Fedele production that is fast becoming nothing less than a Street & Smiths for Bucks and Montgomery counties. Rick’s slick pre-season publication covers almost 40 high school grid programs with pictures, articles, who’s going to be back, who’s looking good – you get the picture. Featuring the writing of Dom Cosentino and Chris Edwards, you just know that this is one top flight effort. Plus I’ll let you in on a little secret – I hear Big Ed Thomas may be providing a preseason ranking just for the schools that Rick covers. That’s a big wow (and a reason to make sure this baby is on your coffee table all season long). Any questions on when and where the pigskin preview will be available just drop Rick a line at Rick@BuxMontsn.com and I′m sure he’ll get back to you with the details.

So – that’s about it for now. What’s that you ask? A question? You want to know what that Concord address is all about up above (at the beginning of this article). Well, let me tell you, after the Bucks County and Big 33 All-Star games were buttoned up I headed to the west coast for a little sight-seeing and R&R. Just so happens that as I’m writing this piece I’m enjoying a lazy afternoon at 1130 Winton Drive in Concord, California. And you guessed it: It’s the Concord as in the Concord De La Salle Spartans (I’ll send you all some pictures soon – plus I’m heading up to Bellevue, Washington next to get a picture of Wolverine Stadium).

So sit tight for now and don’t worry, I’ll be delivering more of my sage and timely preseason writing soon enough. Now where’s Bob? HEY COACH – OVER HERE! Okay, tell me about that streak of yours again – (sorry folks, I’ve got to run).

The Big Picture 07 - Back to the Future