Here is a brief video which covers all the planned improvements for the Neshaminy High School fields. Neshaminy's Chris Stanley did a great job with this video, especially his drone footage.

September 2022 will mark the 67th year of football at Heartbreak Ridge.

We want to celebrate the past and the present as we remember the beginning of Redskin tradition at Heartbreak Ridge. The Neshaminy Redskins stadium aka "Heartbreak Ridge", was constructed in 1956 under the watchful eye of Harry E. Franks and the first home game was played on Friday, September 7, 1956. 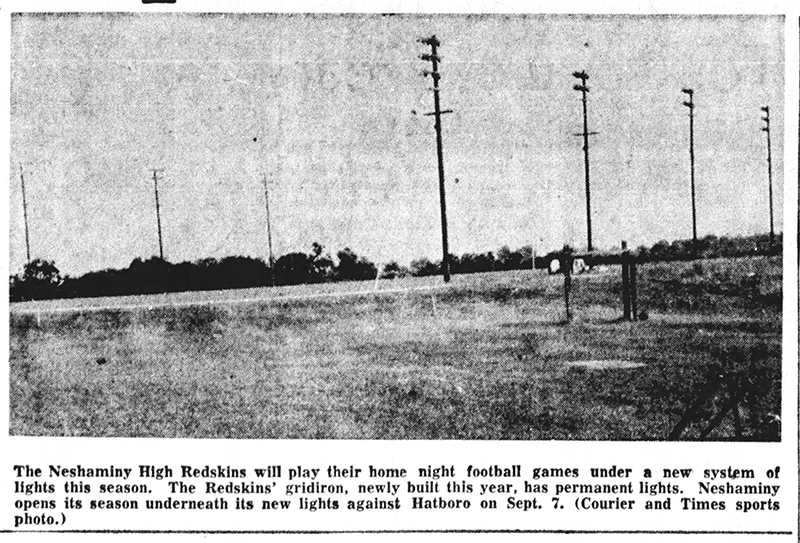 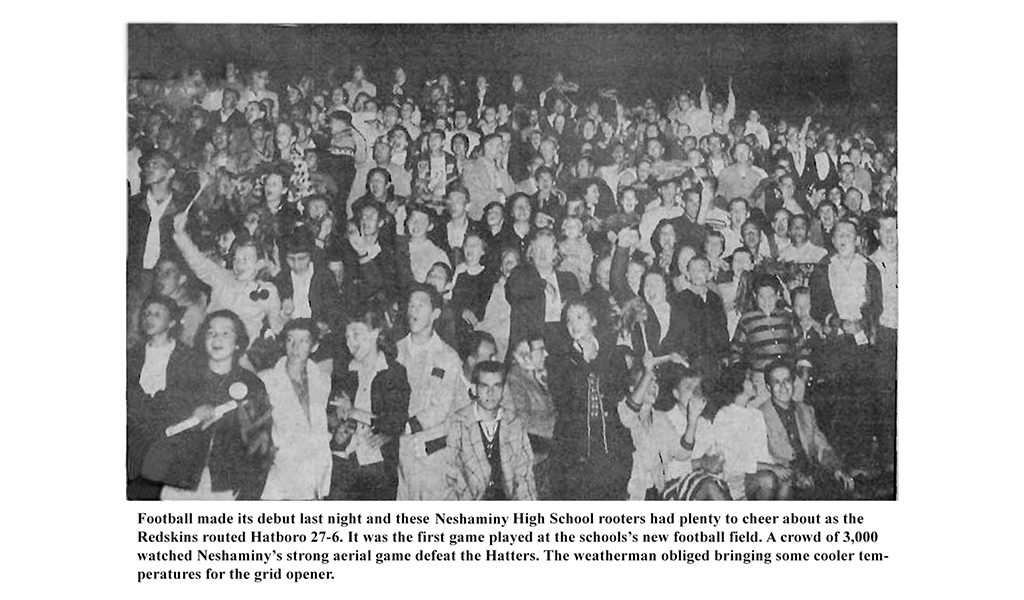 The first Neshaminy Redskin to score in the new stadium was George Rumsey. Jack Reilly threw 4 touchdown passes. Three passes were to to George Rumsey, and the other was to Bill Fischer. George Rumsey (from the Rumsey Farm family, whose farm was located at the spot now occupied by the Reedman-Toll test track) also added 3 PAT's, as the Redskins debut at the Ridge ended in a 27-6 victory using the single wing formation. This victory was the first of many that year as Coach Franks' 11 finished unbeaten at 9-0-1 with only a 7-7 tie with Pennsbury preventing a repeat of the performance of his "perfect" 1954 team which had posted a 10-0 record. 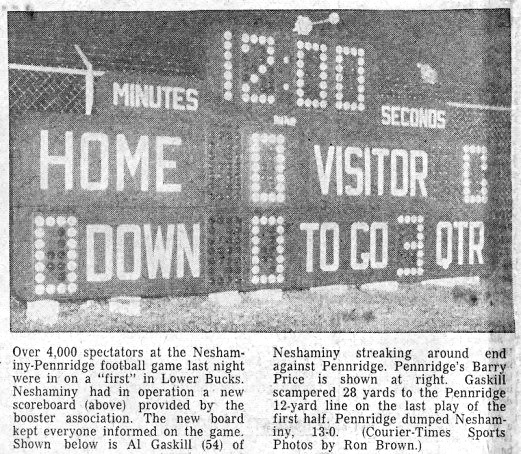 This photo below was first seen in the September 25, 1959 game program for the Neshaminy - Wm Tennent game. With some retouch work in Photoshop, it has cleaned up beautifully. We can safely assume that someone at the HS media program took this photo. We love this photo of the field! 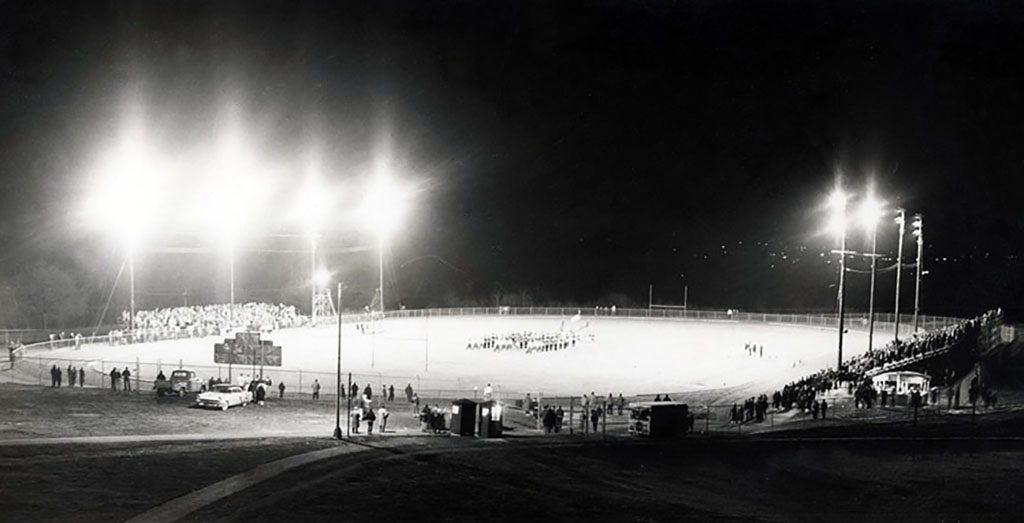 This photo was first seen in the September 25, 1959 game program for the Neshaminy - Wm Tennent game. With some PS work it has cleaned up beautifully. We can safely assume that some one at the HS media program took this photo.

The following articles are from the Courier and were published just before and just after the Hatboro game:

The 1956 high school football season will get underway on Friday night and the word that is going around the Lower Bucks County League again is that "Neshaminy will be tough".

All league coaches and Lower Bucks grid fans will have a chance to form opinions Friday when the Redskins play host to the Hatters of Hatboro High.

Neshaminy, a conference "Powerhouse" for the past four seasons, is in the midst of rebuilding. Seven of the 15 seniors on the squad will probably start against Hatboro.

The Neshaminy club has an equal amount of juniors listed on the team with a crop of 26 sophomores to fit into future Redskin plans.

The Neshaminy coaching staff, Harry Franks, John Petercuskie, and John Swartz have been busily preparing for it's early opener.

Franks does not have too many big boys and must offset the lack of brawn with speed. That should not be any trouble as Redskin backs are noted for their speed. The biggest back is Rumsey, weighing 164. Tom George will be in for varsity action and is the largest lineman, tipping the scales at 179.

The Redskins have two tracksters ready for action. Jim Foster, a sprinter, and Rumsey, also a runner. Rumsey was a second-string All-County end pick last year but now has been transferred to the backfield.

"The club is in good physical shape" said Franks, "Excepting Jerry Mladjen, who is a doubtful starter for Friday night." Mladjen is being groomed for the fullback slot. Max Oestreich, a senior center hopeful, has a broken finger.

Neshaminy scrimmaged Cheltenham last week and the report of the scrap was good. Neshaminy opens with Hatboro, the first of three non-league games. Franks has the boys ready for the fracas and remarked, "It's hard to say what Hatboro will have, we've never seen them play."

Pennridge and Upper Dublin join Hatboro as the pre-league opposition. Neshaminy is the opener for all of those clubs.

Franks doesn't usually discuss the coming season. He did say, however, "All teams will give us trouble." Looking over the last season, when Franks captured his fourth straight title, the grid mentor stated, "Bristol gave us the most trouble."

Petercuskie, who builds rugged lines, said, "We'll be as tough as anybody. Everybody will bear watching, including Pennsbury." Petercuskie believes that Pennridge will be "loaded" and will be plenty of trouble.

Franks, Petercuskie, and Swartz are all graduates of East Stroudsburg State Teachers College. Franks is starting his fifth year at the helm of the Redskins and is seeking his fifth consecutive championship.

Neshaminy has a new gridiron, replacing Playwicki field on Cherry Street, Langhorne. The field has been worked on for the past several months. Seating for the Hatboro game 2,000 and new seats will bring the capacity to 3,000.

Neshaminy will have new dress suits for home games according to Franks. The Redskins will don all red apparel trimmed in blue. The shoulders of the jerseys will have five stars. The backs will wear "tear-away" shirts.

Tonight is the night.

The night which scholastic football fans have been awaiting since last November 22. It's the start of the football season and Neshaminy High gets things going by playing host to Hatboro High.

The Redskins will play on their new gridiron and under their new lighting system at the high school on Old Lincoln Highway, Langhorne. Kickoff time is 8 o'clock.

Neshaminy, the defending Lower Bucks County League Champions, will face Hatboro, loser of all it's 1955 football games. Both teams are in the process of rebuilding.

The Redskins line will have only Don Boyer, a regular center last season, as a veteran. Boys starting tonight will be ends Bill Fischer and Russ Covington, tackles Joe Werner and Tom George, and guards Dale Puff and Frank Conroy.

Jim Gallagher will pilot the Hatters for his first game tonight. Gallagher moved from LaSalle High, Philadelphia, to Hatboro this season.

Gallagher has a rebuilt team for the Lower Bucks League kingpins. Hatboro will start seven seniors, three juniors and a sophomore against the Redskins.

The game should provide interesting as both coaches have outstanding records. Franks, a builder of powerhouses, has won the Lower Bucks conference four years straight, including one co-championship and boasts an overall mark of 35-5. Neshaminy has lost one league game in 28 battles.

Gallagher on the other hand leaves an undefeated season behind at LaSalle High. He coached LaSalle to the Catholic League and City titles last year with a 10-0 slate.

At LaSalle Gallagher ran up 15 straight victories. In his last seven games he was unscored upon. In seven league games LaSalle gave up only one touchdown. It was LaSalle's first title in 32 years.

Franks, John Petercuskie, and John Swartz, the Redskin coaches, were non-committal on the game. Gallagher said "We're coming along OK, but i could use another week before opening." Gallagher is assisted by Don Puglisi and Harry Houllihan.

Beginners in the Neshaminy school district are immediately taught the three R's. However, today the talk in the Neshaminy area is how the Neshaminy football team began it's 1956 season by giving Hatboro High a grid lesson with the use of two R's - Reilly and Rumsey.

This pair, Jack Reilly and George Rumsey, were responsible for all the points as the Redskins -smothered the Hatters 27-6, on the new Neshaminy field before 3,000 fans. Reilly threw four touchdown passes with Rumsey being on the receiving end of three and Bill Fischer the other. Then Rumsey place-kicked three conversions.

When Joe Mattson scored from the three-yard line for Hatboro after three and one-half minutes of play, the fans figured Coach Harry Franks' team would be in for a bad night. But in five plays after the touchdown kickoff, Neshaminy hit pay dirt and tied the score at 6-6.

Hitting the air constantly, Neshaminy scored two more TD's in the second period to make it 20-6 at the half. The third session saw the Redskins again cross the goal line for it's final touchdown and with Rumsey booting the extra points after the last three touchdowns, it was 27-6 at the end of the third quarter. Neither team scored in the last period.

Commenting after his team's victory, coach Franks said, "They need plenty of work. They could d much better."

But as far as the figures go, Neshaminy could not have dome much better on the offense as it netter 363 yards, 108 on the ground and 255 in the air. It completed 14 of its 18 passes with two being intercepted. On both passes missed, the ball bounced out of the receiver's hands. The net yardage gave Neshaminy a total of 15 first downs.

Reilly's touchdown passes were good for 50 yards, nine yards, three yards, and 24 yards. Occasionally, although not on touchdown passes, the procedure would be reversed and Rumsey would hit either Reilly or Fischer with a pass.

On the ground, Reilly netted 29 yards with Rumsey Chewing up 36. Neshaminy was set back 70 yards with penalties.

Hatboro registered five first downs and it's total yardage was 121 yards with 52 of these being made on two runs.

The Hatters upset an apple cart with an early score against the Redskins. Reilly fumbled the first running play after the kickoff and John Bogle recovered for Hatboro. Two line plays lost five yards to put Hatboro 29 to the 34. Mattson then broke loose on a jaunt around the left end and made 31 yards being dropped on the three. Lou Sayland failed to gain but on the next play, Mattson went over for the first score on the new gridiron.

Neshaminy made a 66-yard drive for it's second score with Rumsey getting off to a nice 34-yard run and then putting the ball on the nine-yard line with a rifle pass to Rumsey which was good for 14 yards. When three plays failed to move the ball, Reilly threw a TD aerial to Fischer.

It wasn't long afterwards that Rumsey intercepted a pass on his 33 and ran to the Hatboro 24 before he was spilled. On the first play it was the Reilly-Rumsey for a touchdown, making the score 20-6.

Coach Franks' boys almost had another six pointer before time ran out. It took over on it's 27 and in three plays moved the ball to Hatboro's four before the half-time whistle sounded. There were two passes, 30 and 32 yards, both thrown by Reilly to Rumsey and Fischer, respectively, to help eat up the yardage.

Hatboro only had four plays in the third quarter and they were after the opening kickoff. From then on, Neshaminy predominated, scoring midway in the half on a short three yard pass, Reilly to Rumsey, and after the touchdown kickoff, Neshaminy took possession on a short kick which was recovered by Dale Puff.

Coach Franks used many of his substitutes in the last period and the combination of Jerry Levans, Jim Foster, Jerry Mladjen and Charlie Orfe almost pushed over a score, getting to the Hatboro 22.

Friday, September 6, 1963 - the first game of the 1963 season marked the unveiling of the new "concrete" seats/stadium. With the old wooden and steel-poled bleachers having begun to show their age, the 7,500 seat capacity stadium style seating was well received. Plus with the old bleachers moved to either side of the new concrete structures on both the home and visitor sides, capacity was pushed to well over 10,000.

In 1985 the Neshaminy School District appropriately renamed its athletic venue in his honor as Harry E. Franks Stadium. Additionally, Franks' name was the first to be lauded when he was included in the inaugural class of the new Neshaminy High School Football Hall of Fame that same year too. 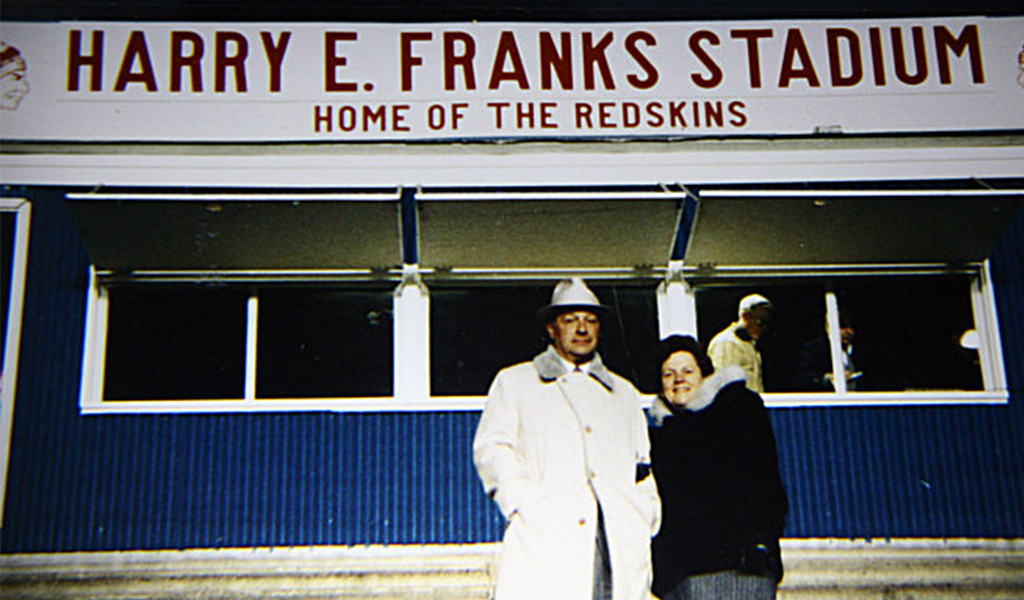 63 years after the 1956 home opener, Harry E. Franks stadium is still as beautiful as ever, and it has been the home of some of the best football Bucks County has ever seen. 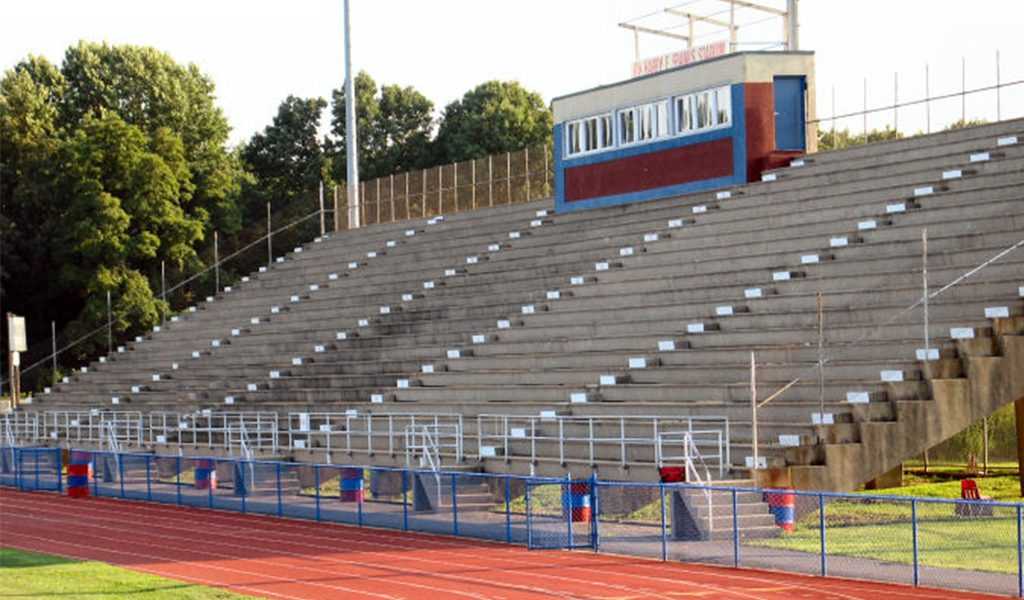 The Ridge gets a new scoreboard. 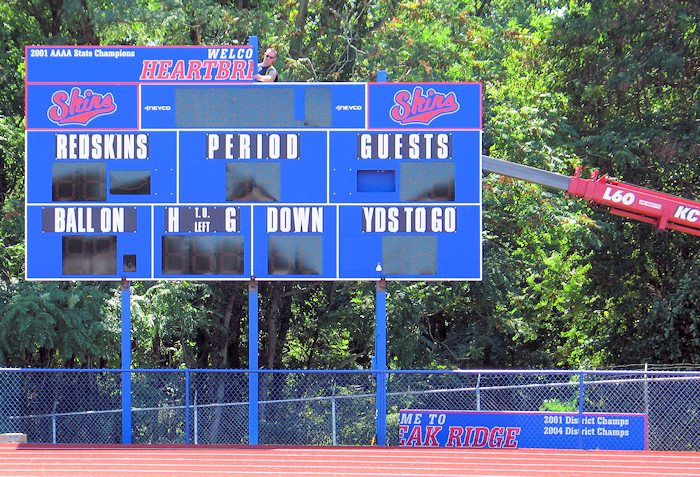 Neshaminy High School was the first High School on the East Coast to have LED lights installed.  The new lighting was installed on July 16, 2015 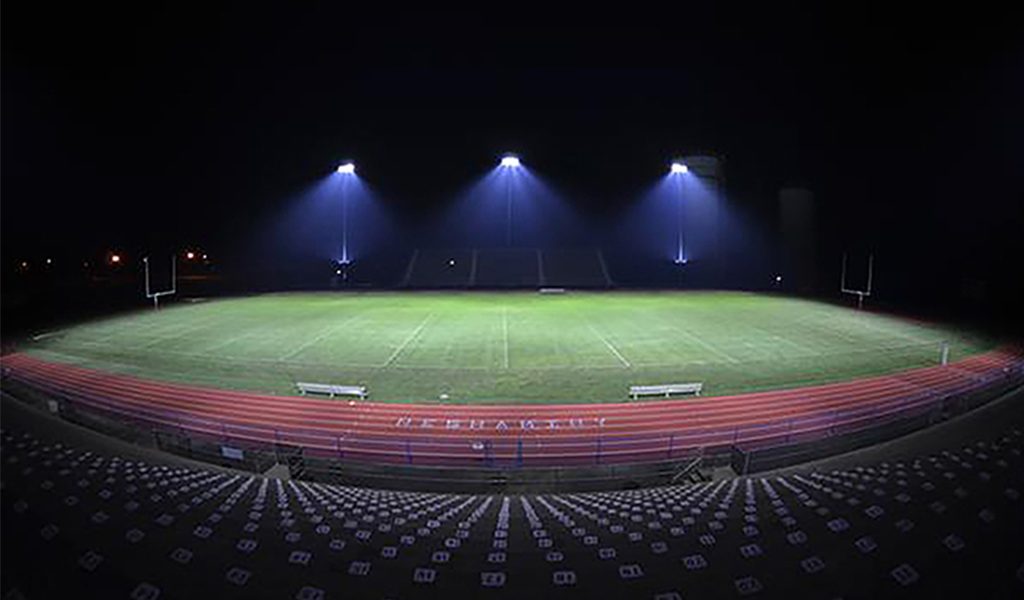 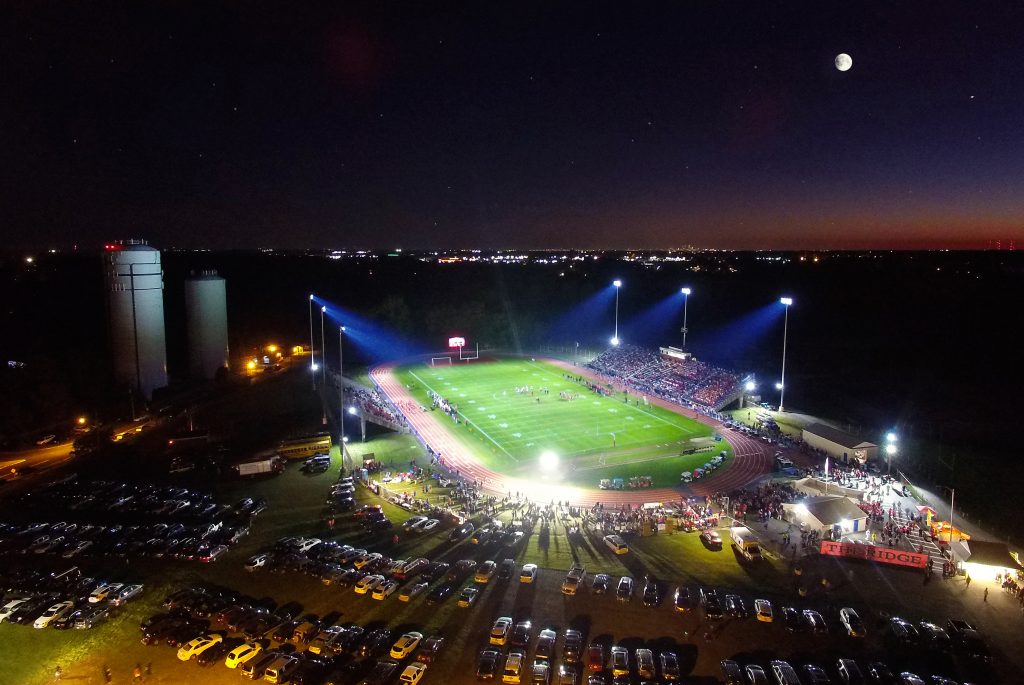 Many thanks to our own Chris Stanley for these shots taken in July 2022 as renovations get started. 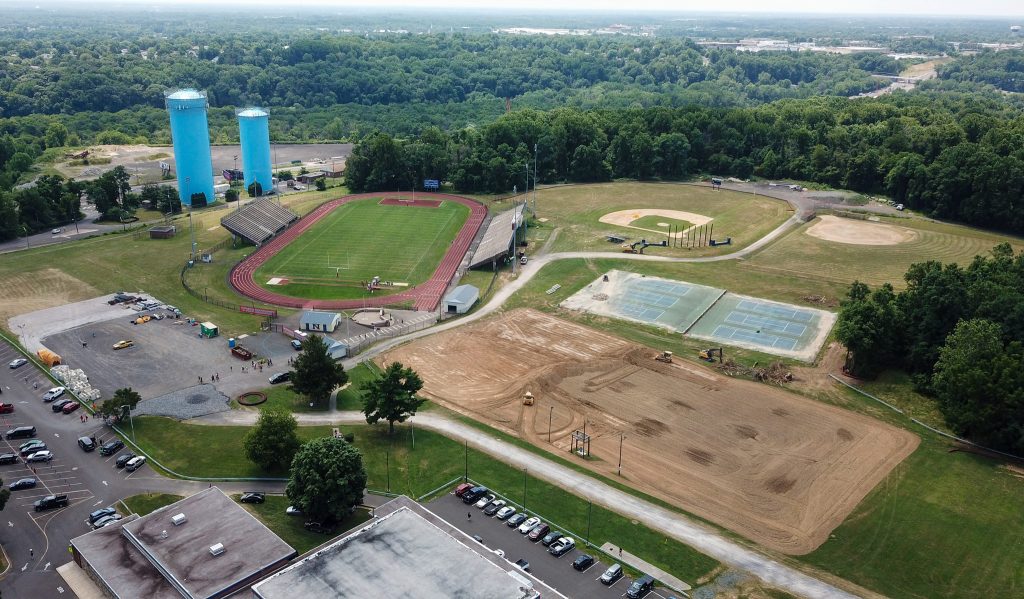 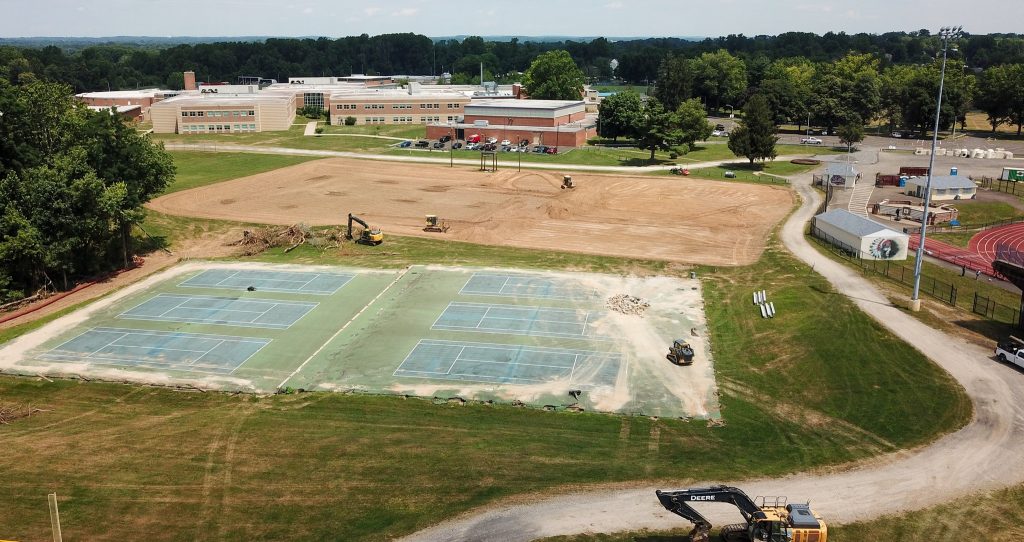 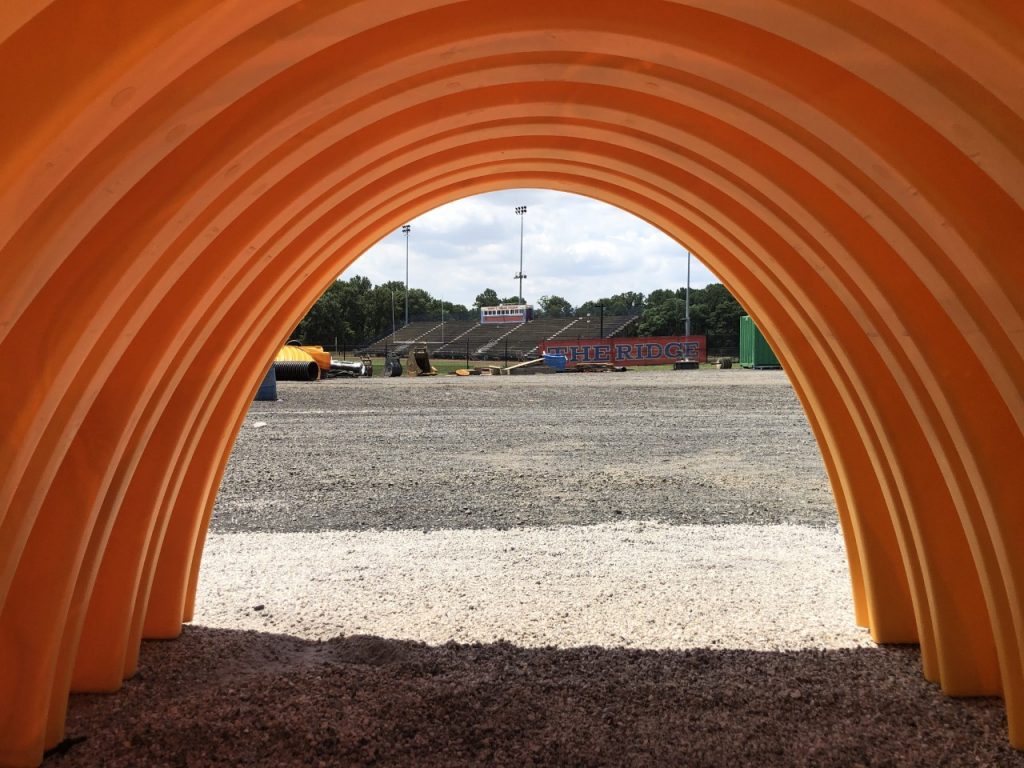