December 2001. This week's article highlights one of Neshaminy's greatest running backs - Jamar Brittingham. His talent and abilities were a large part of the success of the 2001 Neshaminy Redskins as they went through their schedule undefeated (15-0) while capturing the 4A state title!

As chronicled throughout the year, time and time again Brittingham cavorted, juked, twisted and sometimes just ran through, or over, the opposition as he piled on the yards. In fact, he did it often enough that he become the first Lower Bucks running back to rush for more than 2,000 yards in a single season.

Jamar eclipsed that 2,000 yard milestone as he lead the 'Skins past Downingtown East midway through the 2001 playoff schedule.

It was a run off tackle to the short side of the field. An average gain for him – about 13 yards – and nice enough, but not overly spectacular. Not for Jamar Brittingham, anyway.

It wasn’t a typical rush for Neshaminy’s star back. Wasn’t one of those carries where he stops, then starts, then takes off through a haze of defenders for a length-of-the-field jaunt and a touchdown. Wasn’t one of those plays where he jukes a few defenders, then simply crashes over a few more unsuspecting, and unfortunate, souls for that extra yard.

No, it was more or less a solid gain against Downingtown in the playoffs that didn’t really garner a shrug or an extra thought one way or the other. In fact, most of the people in the stands that evening didn’t know what had happened. For another quarter or so, they remained blissfully ignorant.

And then, as the game wound down, Neshaminy’s PA announcer demanded focus. Something significant had occurred earlier, and he hoped they would all pay attention in reverence.

“Jamar Brittingham,” the announcer said through crackling loudspeakers while fighting for aural dominance with an obstreperous crowd, “has just gone over 2,000 yards this season.”

Brittingham, who has run roughshod over the SOL for the past two years, became the first area player to ever eclipse that barrier.

It was as meaningful an achievement as it was remarkable. It’s no surprise, then, that the senior running back has been named the Bucks County Courier Times football player of the year. It’s the second consecutive season that he’s been so honored.

“It means a lot,” said Brittingham of the 2,000-yard milestone. “But I didn’t come into the season thinking about it.”

We’ll let you in on a little secret here, something Neshaminy head coach Mark Schmidt didn’t know: Brittingham didn’t dwell on individual statistics before the season. But he did fantasize about going undefeated. And he talked about it aloud, which, at Neshaminy, is close to blasphemy because the Redskins are about as superstitious a bunch as you’ll find.

The Redskins did that, and made the playoffs, too – the first time they’d reached the postseason since 1988. Obviously, Brittingham, who also played defensive back, was an integral part to the team’s success. And yet, he wasn’t consumed by his own accomplishments. Rather, and to his lasting credit, he reveled in the feats of teammates. 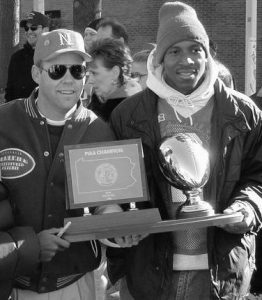 “He was the first guy to get to Scotty Mullin when he caught [the winning touchdown pass] against CB West,” said Schmidt of his running back, who is being recruited by Virginia, West Virginia, Boston College, North Carolina, James Madison, and Pitt. “Jamar was on the other side of the field when we won that game, but he was one of the first to get to Scotty and hug him. When [quarterback Jason] Wiater got 1,000 yards this season, which is something he really wanted to do, I think Jamar was happier than Wiater was. You know, it’s not about Jamar. He completely buys into the team system. He’s just a great kid.”

(Editor’s Note:It is now the year 2005 and Jamar is still one of the most exciting players in College Football. As of this writing, October 2005, Jamar leads Division II in rushing yards and he is 2nd in scoring with 23 touch downs in 8 games. The undefeated (8-0) Bloomsburg Huskies, under the offensive exploits of Jamar Brittingham, lead their division and have their best start since the early 1980’s. With two seasons still to be played for Bloomsburg, Jamar has already placed himself as their 9th all time leading rusher.

So far this year, Jamar was named PSAC Eastern Division Offensive player of the Week for four of the first 6 weeks of the season. With his (4) touchdowns last Saturday against Cheyney, he may have his 5th title in 8 weeks.