The 60s, John Petercuskie, and The Streak

Although it seems so long ago, the memory of the summer of 1960 makes it seem as if it was just yesterday. And how enjoyable it was, so long and hot for those of us who lived in Levittown as we spent sun-baked days with friends at the Country Club pool; swimming, pickup games of baseball, basketball, touch football and, of course, girls. But as the days rolled by and August grew nearer, thoughts of fun faded as what was coming began to dominate our thoughts: summer football practice at the high school – Neshaminy High School.

Sure, my friends and I had a successful 9th grade year playing for Carl Sandburg Junior High and its first-ever football team (we had gone undefeated). But this was different. This was the “big time” for us and we would soon find ourselves playing with the “big boys.” After all, Neshaminy football was already an institution in Bucks County. Their mark had been established as a team that played tough, hard-nosed football which won almost every game they played. And what a group of players they had! A fullback by the name of Harry Schuh who as a 6’2″, 240 pound junior was 2nd team all-state and a tailback, Jack Stricker, who ran like the wind. In front of them was a line that opened holes a freight-truck could drive through. It was a “Who’s Who” of future Neshaminy Hall of Fame players!

And we couldn’t get enough of them. Why for three straight years on game night Fridays we had been riding the activities school bus to the high school. Once there we’d wander over to the gate in the fence and wait for the team to come running through it, down the little hill and under the goal posts. Finally, they’d pour out onto the field to the booming admonition of the announcer “Look to your left, here come the Redskins.”

Yes, they were bigger-than-life to me and my friends; they were our idols. And now that summer was drawing to a close it would be just a few days and we’d be putting on pads in the same locker room with them; running out onto the same practice field with them; and actually PLAYING with them. It seemed unbelievable!

Not disappointing any of us who played in the least, those first few days of practice were definitely an eye-opener. And the coaches: John Petercuskie, Pete Cordelli and Jack Swartz: former Marines that all of us were convinced thought we were in boot camp at Parris Island. Characters all, each stood out in his own way. There was ‘Cuskie with his ever present ball cap and whistle around his neck who wouldn’t hesitate to get into a four point stance and knock you on your butt to make a point. Coach Cordelli with the crooked little cigar in his mouth; we actually never did see it lit instead it seemed only good for chewing with the resulting juice spit everywhere. And the position of the bill on Swartz’ cap (forward, to the side or straight to the back) well, let’s just say it was a barometer of his mood.

And oh those “two-a-days” helmets and shorts in the morning for that first day, full pads and full contact in the evening. Sprints and cross-body blocks on a never ending line of “long dummies”; few water breaks (in those days it was thought that too much water would give you cramps) and quarter-size salt tablets. To make matters worse, as 10th graders, you were the sacrificial lambs playing defense against Schuh, Stricker and the rest of the upper class “veterans” of the team. So many lessons were quickly learned – like that first time the line opened up and it was Harry Schuh and me, all 6 feet and 155 pounds of me. No need to wonder about who won that contest.

But as endless as they seemed, those two grueling weeks of August practices were over soon enough and opening night against Bishop Egan had arrived. Although unforgettable for all of us, as I walked into the gym for the first time to suit up as a Neshaminy Redskin; as I saw all the game uniforms laid out across the gym floor, all in neat little piles; as I heard the Notre Dame fight song playing in the background; as I found my uniform, my number, I realized how special that moment was and how lucky I really was.

And as if that moment could be topped, once dressed and with pre-game preparation completed there was the “walk” to the gate. Once there a pause and then down the hill, under the goal posts and those words we had heard so many times over the years: “Look to your left, here come the Redskins!” It was a moment in time forever chiseled in my mind and in my heart. If running down that hill and through those goalposts didn’t cause goose-bumps in each and every one of us, nothing ever would.

While playing sparingly on kickoffs, punts and a few plays on defense during that opening game, that second contest of the 1960 season, my sophomore year, there was a moment that stands out as much as any other that season – and in my life. It was delivered by Coach Cordelli. Coming up to me during pre-game warm-ups he was terse as he said: “Barr, you’re starting at defensive halfback, don’t screw it up!” It was a dream come true. And from then on out, those three years of games are etched in my thoughts. Not so much because of that announcement by Coach Cordelli or for the wins or the touchdowns or the glory but, instead, for the relationships that were to be formed. For as was to become apparent, Cuskie, Cordelli and Swartz were like second fathers to us and they still are to this day. And my teammates (some 40 years later) are still my best friends. As players and coaches we formed a special bond that can’t be put into words. 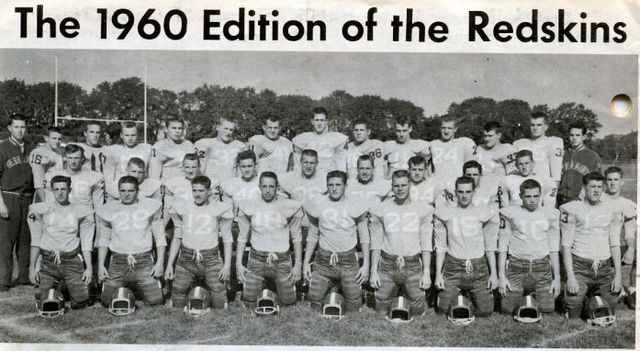 And while we knew that being a Neshaminy football player was something special, those of us that took the field that year didn’t realize then that it was to be the start of an historical era in the continuing story that is Neshaminy football. In point of fact, from 1960 through 1965 – 6 full seasons and 65 games on the field – Neshaminy would lose just once. Jack Stricker would set the area scoring record in 1960 only to have Bob Baxter break it in 1962. And just for good measure the 1960, 1961 and 1962 teams would set overall scoring marks still not eclipsed. It was truly a glorious episode for the Neshaminy program. 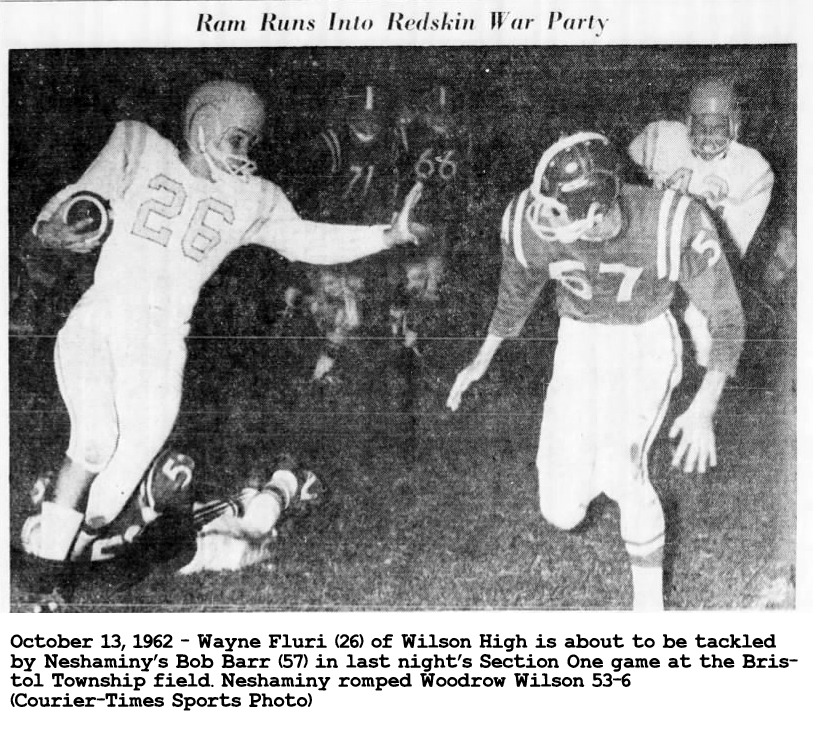 To be sure, Neshaminy football is more than a game to those who played it; it’s an experience and a part of one’s life that stands out from the rest. And for those fortunate young men who have had the opportunity to be a part of it, to be a Neshaminy football player, they will forever know the truth of those simple .

For more information on The Streak