September 15, 1972. Hard on the heel of the banner 1971 season, the '72 squad featured a nucleus of returning starters and plentiful supply of talented replacements for seniors who had graduated. Accordingly, expectations were for nothing less than a continuation of the winning ways of previous years. But in the opener against Bishop Egan, the 'Skins were cold as ice as they were upset by the Eagles, 18-7. The following week, at home on the Ridge against a tough and determined Pennridge team, the boys from just above the creek played the first half as if it was part two of the Egan game. At the break it was the Rams in control, 14-6, with the 'Skins teetering on the edge.

Then in the second half, after realizing their year was about to go up in flames, the Neshaminy defensive backs stepped up to the plate. Three different players each stole an aerial that lead to a score. Thus the game and perhaps a season too, were saved.

In victory over Pennridge

But unfortunately for Pennridge quarterback Paul Auckland, their puzzlement occurred after the game had ended with Neshaminy a 25-14 winner before 7,000 fans. During the contest, especially the second half, Auckland was the one bewitched, bothered and bewildered. And the Redskins’ defensive secondary was responsible.

Auckland’s only three completions of the second half were to Neshaminy defenders, as the ‘Skins fought back from a 14-6 halftime deficit with three touchdowns within four minutes, all set up by interceptions.

But the rapidity of the thefts had Neshaminy coach Jack Swartz in a slight state of uncertainty.

“I’m not sure when I got my second interception,” began Smith. “Yes, I guess it was the last one.” 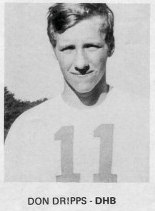 “That’s right,” agreed teammate Bill Correll. “I got the first one in the second half, Don (Dripps) the second and Bart the third.”

Neshaminy led for the first time in the game, and the season, after Dripps’ interception with 2:04 left in the third quarter.

The senior back snagged the ball near midfield, and returned it to the Pennridge 26. Five plays later, fullback Len Barker bulled over from the two to give Neshaminy an 18-14 lead. Barry Sullivan’s kick was no good.

Dripps was also partially responsible for the ‘Skins first TD of the second half which was set up by Correll’s interception.

With four minutes remaining in the third quarter, Dripps deflected an Auckland pass near the Pennridge 40.

“I don’t remember how it happened exactly,” Correll smiled. “I was just there. And then I found it (the ball) in my arms and I was in a state of shock.”

Correll returned the ball to the Rams’ 34. After two running plays gained only three yards, Neshaminy quarterback Bob Grupp passed left to Joe Sroba who weaved his way to the sideline, and pranced into the end zone to pull Neshaminy within two at 14-12. Grupp’s pass for two points failed.

That pass to Sroba was one of only five passes Grupp threw in the second half, after doubling that output in the first half. But two of his first half tosses were intercepted, and one was directly responsible for Pennridge’s last score with only 19 seconds to go in the half. 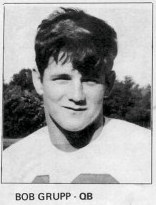 “I was throwing too much into crowds that first half,” Grupp said. “Then in the second half, I started taking double looks, and then running when someone wasn’t open.”

Grupp ad libbed his way for 76 yards to lead Neshaminy’s devastating ground game which ate up much of the second half after the ‘Skins had struck for their three quick scores. Sroba rushed for 71 yards.

“Bob’s running out there gave us four effective backs,” Swartz said. “It really helped our ground game. And the kids finally woke up and were blocking well too.”

“Not only did we get the blocking, but our backs were running to the right holes consistently,” Grupp said. “Barker, Joey and Mugsy (Mark Donahue) all were running and blocking well.” 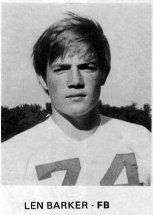 Smith struck the crushing blow for Neshaminy on the first play of the fourth quarter. He picked off Auckland’s pass at the Neshaminy 44, worked his way to the right sideline and then streaked in for the score.”

“When I got the ball, I saw four Pennridge players in front of me,” Smith began. “But then Ellis (Connor) blocked his man. Straw (Mark Strawbridge) and Bob Miller got theirs. And I outran the other man. With 20 yards to go, I knew I had it, and it really felt great.”

Smith also intercepted a pass early in the first quarter, but Neshaminy returned the ball on a fumble three plays later.

EXTRA POINTS − Swartz had spoken of lineup changes after last week’s 18-7 loss to Bishop Egan, but then changed his mind. “You don’t change that quick, after just one loss. A lot of our players are inexperienced and just finding out what to do.” Middle guard Miller and tackle Strawbridge both played excellent defensive games. Pennridge’s attack was led by the Roberts brothers, Dave and Bob, and Scott Kingbauer. All three went both ways. Dave Roberts intercepted a pass to set up Pennridge’s 69 yard TD pass play from Auckland to Kingbauer. Kingbauer picked off a Grupp pass late in the second half and returned it 30 yards to set up the Rams’ score.

(Editor’s Note: The win over Pennridge would be the first of 9 straight for the 1972 Redskins. Relying on the talent of Bob Grupp, Joe Sroba, Mark Donahue, Lenny Barker, Ben Watson, Steve Gale, Harry Cook, Bart Smith, Mark Strawbridge, Ellis Connor, Don Dripps, Bob Miller, Bill Correll, Bob Fox, Frank Conger, Tim O’Brien, Jack Wills, Mark Stevenson and company, the ‘Skins of that year rolled through the meat of their season. And in a reverse image of the previous year, the 9-1 Tribesmen then found themselves facing a 10-0 cross-town rival Pennsbury team that had been manhandling the opposition. With the table thus set for Super Bowl II, the game wasn’t decided until the final moments when a disputed fumble – still argued to this day – helped the Falcons hand the ‘Skins only their second loss of the year, 23-21. All in all, the 1972 ‘Skins weighed in at 9-2 and are recalled as one of the gemstones of head coach Jack Swartz’ five year reign.