October 19, 1955. Not unlike a major Las Vegas revue, Neshaminy plays to the crowd twice during a five day period. As heavy rains force their Saturday contest to be moved to the following Monday night, the 'Skins just squeaked by Morrisville, 14-12. Next up was Bristol on Friday evening of the same week. Although favored to win, the Playwicki boys were running short of almost everything. It couldn't have been more evident that the Langhorne gridders were tired and slow as the game was knotted-up 6-6 with just minutes to go. And for the Warriors, a deadlocked finish would be as good as a win for the team by the river.

So the question became: Would "Neshaminy Lightning" come to the rescue?

There is a plaque somewhere in the Neshaminy locker rooms which Coach Harry Franks should dust off and hang where all future Redskins may see it.

Inscribed on it is a commonly used saying in athletics: “A winner never quits and a quitter never wins.” This cliche is emblematic of the Redskins who romped off the field with a 12-6 last-second win over the Bristol Warriors Friday.

Neshaminy had ample reason to settle for a tie. Two bruising football games in 5 days is almost too much to ask of one ball club.

Coach Gordon Davies of Morrisville, who was scouting Bristol, stated from the sidelines that it appeared as if the Neshaminy players were “dragging” a little. “I know our boys have been dragging all week in practice,” Davies added.

But the Redskins didn’t quit. They demonstrated that they had that little extra something to pull a very crucial game out of the fire in the last minute of play.

The Redskin victory march actually commenced midway through the final quarter. It started on Neshaminy’s 24-yard stripe. Runs by Errol Faunce and Ned Moyer and a Faunce-to-Robert Picciotti pass placed the ball on Bristol’s 30-yard line. However, a holding penalty caused the drive to fold as two passes were incomplete.

Moyer then punted to the Warriors’ 7-yard stripe. Bristol annexed one first down, but then the visitors bogged down on a backfield-in-motion penalty. Bristol was forced to kick and Neshaminy returned the ball to the opponent’s 37. At this point, with two minutes to play, the Redskins put on their war paint and got down to serious football.

Faunce, Neshaminy’s ace aerial artist, started hitting the target with precision. Moyer, the first to receive a pass in this do-or-die drive, carried the ball to the 31-yard line. The “arm” then hit quarterback Jim Cummings for another 10 yards and a first down on the Warrior 21.

On the next play Faunce faded as if to pass, but instead handed the ball off to Moyer who circled to his left and raced to the 9-yard line. With first down and goal to go, Faunce dropped back, checked his receivers, and then shot the ball over the heads of the defending Warriors into the outstretched arms of Moyer who crossed the goal line stripe for Neshaminy’s tenth straight league win.

The plays that called for this thrilling climax actually took place in the first half of the contest. Neshaminy scored the second time it had possession of the ball. The Redskins started on the Bristol 38. Faunce moved the ball five yards. He then passed to George Rumsey which accounted for another four. Bill Barrett next pierced the center of the line for a first down. Then a pass to Moyer, good for 25 yards, moved the ball to within two yards of pay-dirt. Faunce got the call and smashed over for the Redskins first score. Rumsey missed the extra point try.

The ease with which Neshaminy scored its first touchdown was not evidenced again until the final period. The forward wall of the Warriors stiffened and the Redskin offense came to a comparative standstill. However, the offense of Bristol started to catch fire in the last part of the second period.

After an exchange of kicks, Bristol ended up on the Redskins’ 39-yard stripe. In 10 plays, with Fenton Larrisey doing most of the running, the Warriors moved the ball to the Neshaminy 9. With fourth down and 9 yards to go, Gene Ferry got beyond a Neshaminy defender and snagged a Ted Kowal pass. The attempted PAT was a pass play which game captain Monty Ahlum nipped in the bud by driving the receiver out of bounds just yards from the goal line. From that point on it was a duel of linemen until the final minutes of the game.

Although the line did not play as well against Bristol as it had against Morrisville, Coach Harry Franks was well satisfied with the effort of the Neshaminy forward wall.

“I think they did a good job” commented Franks. “If you look at the statistics, you will see that Bristol was making its necessary yardage on the fourth down.” 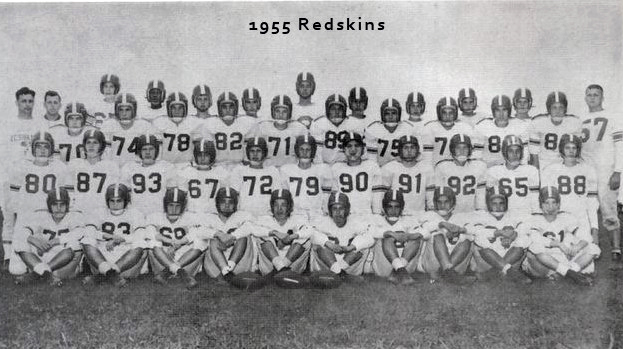 (Editor’s Note: The 1955 season was Harry Franks’ 4th at the helm. Enjoying a 28-2 overall record the previous three years, the ‘Skins were on top of the world. Then something occurred that happened only once during Franks’ tenure − consecutive losses and in this case, three. Playing Muhlenberg, Pleasantville and Eddystone right out of the gate, the boys of ’55 were in trouble as each of those schools gained revenge for the previous year. Although on the ropes, Neshaminy didn’t lose heart. With a “never quit” attitude, they turned it around and ran the tables in the LBC, finishing the year 7-3. Thus, 1955 saw Langhorne take home another in its string of 14 straight LBC championship trophies. A rough and tumble bunch, its players including the likes of Ned Moyer, Jim Cummings, Bill Barrett, Errrol Faunce, George Rumsey, Monty Ahlum, Andy Davis, Charles Koch, Bob Armstrong, Dale Puff, Steve Nieckoski, Don Boyer, Robert Picciotti, Jerry Levans, Tom Stricker, Jerry Mladjen, Frank Conroy, Richard Apsche, Gary Nielsen, Ed Pellegrine, Bill Rothenback, Charles Orfe, Frank Kitchener, Erwin Moyer, Joe Werner, Jack Reilly, Joe Markee, Al De Angelis and others.)