November 18, 1988. Head coach John Chaump's powerful '88 squad ran the table that year and finished the regular season 11-0-0, a feat not accomplished since the wonder boys of 1971. A defensive juggernaut, they allowed but 57 points in their 11 wins. Unleashing the offense in the season closer with Pennsbury, they won going away 49-14. And in so doing, they put themselves in position to be one of the four teams in the first PIAA statewide playoff tournament; however, there was one little problem. The 10-0-0 Central Bucks West club still had its traditional Thanksgiving Day game remaining against underdog Central Bucks East. A win by the Bucks and they would get the call as "strength of schedule" would be the tie-breaker that would keep the 'Skins at home.

But in the meantime, Neshaminy was just perfect!

For Neshaminy, this game could best be described as putting an exclamation point on a landmark season.

The Redskins still have a chance of advancing to the state playoffs, but only if Central Bucks East upsets unbeaten CB West Thanksgiving day. A CB West victory would leave both squads unbeaten, but the Bucks would advance on the basis of the fifth tiebreaker, according to the PIAA point system, combined records of opponents.

There was too much joy in the Neshaminy ranks after Friday’s win to worry about state playoffs. In rolling up it highest point total of the season, head coach John Chaump’s team brought a conclusion to its season-long quest for perfection. Neshaminy now holds a 27-25-7 advantage in the series between these two fierce rivals.

In addition to the flush of team success, Neshaminy also saw one of its players achieve an individual milestone. Junior tailback Jonathan Hall, though hobbled with an ankle injury and used sparingly, managed 44 yards on 11 carries and finished with 1,001 for the season. Johnathan Hall

“I think it was a super finale,” said Chaump. “Everybody played so well and the defense was fantastic. There are so many individual heroes that it’s hard to mention everybody. I’m glad so many of our backs got in the end zone (quarterback Dan McClave and running backs Jeremy Horton, Rob Latronica and Hall scored touchdowns).”

“Andy Szarko (Pennsbury quarterback) is tough. He throws the ball well but he also looks away receivers very well. He’ll look to one side and come back to the other, but we did a great job defensively. Our defense is set up for the linebackers to make most of the plays but the defensive front also deserves credit. Mike Hanley (noseguard) and Dale Edberg (defensive tackle) don’t get much credit, but they are clearing away blockers for the linebackers to clean up.”

Despite the impressive point production, a defensive player was the only Redskin to manage more than one touchdown. Senior defensive end Artie James reached the end zone on a 15-yard return of a fumble recovery and a 55-yard interception return.

The Falcons (5-6, 4-4), who suffered with a rare losing season under first-year head coach Al Matuza, Jr., probably never recovered from a blown scoring opportunity in the first quarter. Linebacker Jeff Badner had intercepted a pass from McClave and returned it to the Neshaminy 42. Szarko took his squad down to the 6, but missed a 22-yard field goal attempt on fourth down.

Taking over, the Redskins then drove 80 yards to take a 7-0 lead. McClave notched the touchdown when he turned upfield on an option, found wide open space on the right side and galloped 47 yards. His 23-yard pass to Hall on a third-down play was key in keeping the march alive. 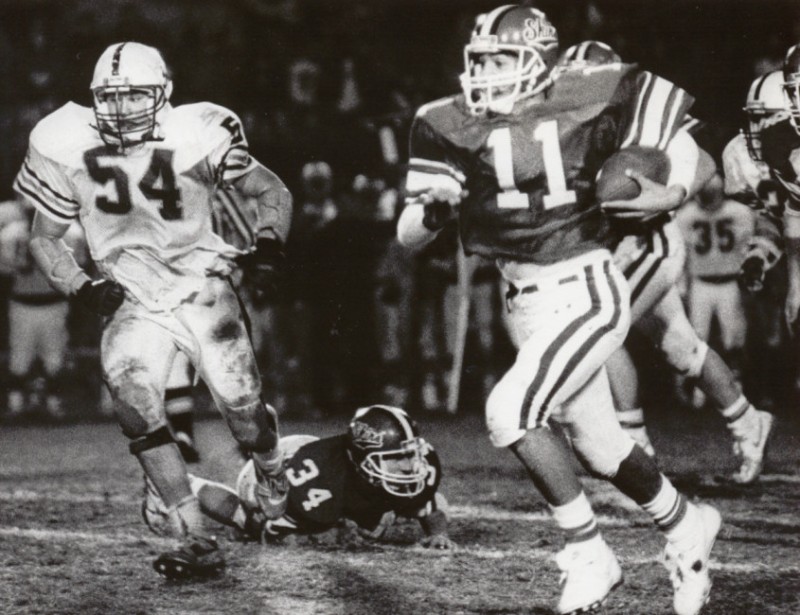 Later in the second quarter, Latronica raced around right end with a pitch for 21 yards and a touchdown. The score reached 21-0 barely a minute later on the first of James’ touchdowns. Szarko bobbled the ball after a hit from linebacker Mike Frederick. James scooped it up out of the air and rambled 15 yards to the end zone.

Horton scored his first rushing touchdown early in the third quarter when he followed a nice block by center Mike Sauerbry through the line and chugged 36 yards for the score which made it 28-0. With the help of three Neshaminy penalties, Pennsbury finally got on the board later in the stanza as James Bodley (23 carries, 82 yards) ran 12 yards for a touchdown.

The Falcons looked like they might get back in the game after Bodley’s score, before lightning struck again in the form of Neshaminy’s defense. After recovering a McClave fumble on the Neshaminy 12, Pennsbury got to the three before a jarring hit on Bodley popped the ball up in the air. Neshaminy cornerback Bob Gaul plucked it out of the air and ran 98 yards the other way for a touchdown. 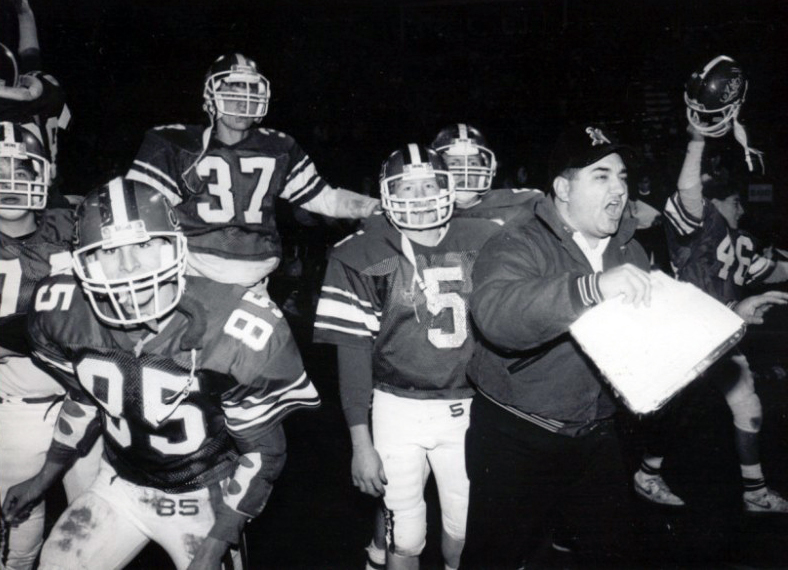 1988_11_18 Neshaminy celebrated their win over Pennsbury

(Editor’s Note: The 1955 season was Harry Franks’ 4th at the helm. Enjoying a 28-2 overall record the previous three years, the ‘Skins were on top of the world. Then something occurred that happened only once during Franks’ tenure − consecutive losses and in this case, three. Playing Muhlenberg, Pleasantville and Eddystone right out of the gate, the boys of ’55 were in trouble as each of those schools gained revenge for the previous year. Although on the ropes, Neshaminy didn’t lose heart. With a “never quit” attitude, they turned it around and ran the tables in the LBC, finishing the year 7-3. Thus, 1955 saw Langhorne take home another in its string of 14 straight LBC championship trophies. A rough and tumble bunch, its players including the likes of Ned Moyer, Jim Cummings, Bill Barrett, Errrol Faunce, George Rumsey, Monty Ahlum, Andy Davis, Charles Koch, Bob Armstrong, Dale Puff, Steve Nieckoski, Don Boyer, Robert Picciotti, Jerry Levans, Tom Stricker, Jerry Mladjen, Frank Conroy, Richard Apsche, Gary Nielsen, Ed Pellegrine, Bill Rothenback, Charles Orfe, Frank Kitchener, Erwin Moyer, Joe Werner, Jack Reilly, Joe Markee, Al De Angelis and others.)