September 25, 1965. As usual, the annual tussle between the Redskins and the Red Rovers was a dog fight. And after losing once too often to Neshaminy, Easton was convinced this was its year to win. Late in the game, it looked like they might be right. With the 'Skins normally rock-hard defense seemingly incapable of stopping the rampaging gridders from up north, the Tribe was fighting for its life. As only scant minutes remained, it also appeared as if the teams had changed mascots with the Rovers leading 27-19 and yelling war whoops while the Indian Nation appeared to be the exhausted and panting canines.

Then Neshaminy's field general and All-State quarterback, Jim Colbert, got down to business.

Easton High realizes today it is faced with an annual “malignancy.” The “disease” developed in 1962 and as of yet the Red Rovers haven’t found a cure.

The foreign substance which has caused this problem can simply be called “Redskin-itis.”

Since ’62, Easton has found the Redskins of Neshaminy invincible and Saturday evening was no exception. 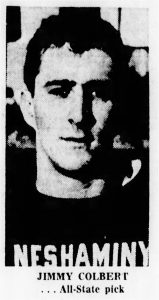 Neshaminy, behind the brilliant running of quarterback Jim Colbert, staged a comeback in the final four minutes of play to drop Easton, 33-27, before a crowd of better than 7, 000.

The contest, which has to be one of the best in the past decade, never had a dull moment from the opening kickoff to the final gun.

The victory was vital for the ‘Skins since it was their third in a row. It also gave them a 1-0 record in the Big Six league and the current top spot in that conference.

There’s no doubt the battle had everybody talking to themselves, especially the Easton Rovers who today are wondering what they have to do to beat Neshaminy.

Not only did they roll up 27 points − the most any team has scored against the ‘Skins since Allentown’s 32-7 victory in 1957 − but they were always ahead until the ‘Skins pushed across the decisive score with just 2:08 left in the game.

Coach Petercuskie had nothing but praise for the Easton club − especially its offense which he and his staff believed wasn’t that potent.

“We knew we could move the ball on them and score, but we under estimated their offensive power.”

And that’s what you have to call it – “power.” The Red Rovers put on such a display of brute-running that for a while it appeared that Neshaminy would never catch up.

Following a Neshaminy punt in the first period after the ‘Skins were unable to do anything, Easton took over on it own 24 and nine plays later scored when John Cappellano took a pitchout and raced over from the seven. So brutal was the attack that the Rovers picked up six first-downs during the drive. George Myers kick was true for the PAT.

Colbert, who was involved in all of Neshaminy’s scoring, got the ‘Skins on the scoreboard early in the second period when he scampered two yards over his left guard. The TD was made possible when Steve Whitehurst recovered an Easton fumble on the Rovers’ 24. George Nolte’s kick for the PAT was blocked.

Easton didn’t give the fans room to breathe, however, as it came right back in four plays to score. Cappellano, who had three of Easton’s four scores, raced 53 yards on a second down play to put the Rovers on the enemy’s five and, following an offside penalty, Frank Freidl bolted one yard to pay-land. Once again Meyers put the ball through the uprights.

Neshaminy’ offense then took over taking the ball on its 37 and scoring in five plays, capped by Colbert’s 29-yard TD pass to Rich McHale with 1:34 left in the half. Nolte booted the point after to shave Easton’s lead to one, 14-13, at the half. 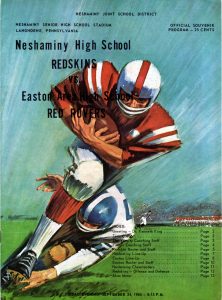 The second half began like the first as Easton took charge and marched from its own 17 to paydirt in nine plays, climaxed by a 61-yard TD aerial from Meyers to Cappellano. The Rovers were helped along by a pass interference penalty against the ‘Skins. Meyers’ try for the point after was wide.

Neshaminy made the score 20-19 scoring with 2:31 left in the third period. The ‘Skins took an Easton punt on their 42 and, aided by pass interference, scored in 11 plays. Colbert went around right end for the final seven yards. Nolte’s kick was perfect for the PAT.

The scoring barrage didn’t let up. Easton scored one minute later as Cappellano found a big hole on the left side and dashed 49 yards for the score. Meyers, who set the TD up rambling 24 yards on first down to put the ball at midfield, booted the PAT to give the Rovers a 27-19 margin.

Things looked dim for the Redskins in the fourth period as Freidl pilfered a Colbert pass on Easton’s 20 with exactly eight minutes remaining. However, Neshaminy’s defense, which couldn’t do a thing all night, finally came through and forced the Rovers to punt.

The ‘Skins started from Easton’s 49. Colbert picked up 10 yards, Gerry Barr 18 more and Colbert two lengths to put the ball on the 20. Colbert then fired a TD pass right into the arms of Barr for the score. Nolte came through with the extra point to cut the lead to one, 27-26, with 3:18 showing on the clock.

A 15-yard personal foul following the kickoff plus Easton’s inability to pick up the necessary yardage forced the Rovers to punt with just 2:34 left.

Taking the ball on its own 39, Neshaminy realized it had to cover 61 yards in a little more than two minutes. But Colbert wanted to get things done in a hurry.

On first down, he faked a pass and, with three blockers in front of him, raced down the right sideline for the necessary yardage. Nolte’s foot gave the delirious Neshaminy team a 33-27 lead.

Easton had one more opportunity but three incomplete passes and a 15-yard clipping penalty finished the stunned Red Rovers.

(Editor’s Note: Petercuskie’s final year at Neshaminy saw the ‘Skins finish 10-0-1 as they capped off their 51 game unbeaten streak which had started in the 4th game of the ’61 campaign. A scrappy club, the 1965 squad thrived on the exploits of its leader, Jim Colbert. So versatile was he at the quarterback spot, both running – he scored 15 on the ground alone in ’65 – and passing, that Neshaminy had changed its offense to the “T” formation from the single wing for his junior season in 1964. A success that year, 1965 was no different with Colbert under center and workhorse running back Gerry Barr along with Tommy Thompson and Bob Rotolo behind him. A tough defensive club too, they gave up just 60 points in their 11 games. All in all, 6 Redskins on that year’s team are in the Hall of Fame including Colbert and Barr plus Rich McHale, Fred Conger, Bruce Sauerbry and Dave Rakita. And with a supporting cast consisting of Harry Hoffman, Rick Foley, Steve Whitehurst, Bill Elswick, George Nolte, Gary Pasquine, Tom Munski, Sammy Spadaccino, Ernie Forchetti, Steve Madden, Bill Walker, Pete Vosburgh, Jim Lobley and others, 1965 was a very special year in Redskin history.)