December 01, 2001. Head coach Mark Schmidt's unstoppable '01 squad finished the regular season 10-0-0, putting Neshaminy back on top as a Pennsylvania football powerhouse. The Redskins entered the playoffs as an unknown foe and, almost weekly, the underdog. Yet, week after week they proved that they could play with anybody - and win. Having defeated CB East, Downingtown and Conestoga, the 'Skins earned the right to play for the Eastern Final in Hershey. Focused on one goal, and one goal only, Neshaminy wanted more than anything to play for the state championship the following week. But the 'Skins had one obstacle in their way, the heavily favored Cumberland Valley Eagles.

At game time in Hershey the weather couldn't have been better − warm and sunny − as Neshaminy faced its biggest challenge of the year. And following their season long form, the Redskins wouldn't be satisfied until another team learned just how determined they were.

Although not knowing it yet, the Eagles were about to be educated.

HERSHEY – If the Neshaminy Redskins were ever to doubt their own talents, question their intestinal fortitude or give up on their collective dream to be the best high school football team in Pennsylvania, yesterday was the day for it.

Cumberland Valley High School brought its punishingly abusive power running game to Hersheypark Stadium and pounded the Redskins in the first half of the PIAA Class AAAA state playoff semifinal.

The Eagles of Mechanicsburg, champions of District Three, owned the football for the first two quarters and went into intermission with a two-touchdown lead, courtesy of a 16-play scoring drive, followed immediately by a 17-play march.

But Neshaminy, the District One titlist, a group punched and prodded down the field for the better part of 24 minutes, had no quit in it. Instead, the Redskins played “Rocky” again – climbing off of the deck for the umpteenth time in this, their charmed season.

The Redskins eventually outslugged and outlasted the Eagles, 25-19, to win the state’s Eastern Region title and earn a berth in next Saturday’s state championship game here at 5 p.m., opposite District Seven’s Woodland Hills of Pittsburgh. Woodland Hills (14-0) defeated Altoona, 34-0,in the Western Region final yesterday afternoon.

Neshaminy (14-0) will become the first area football team ever to compete in a state championship contest. Pennsylvania adopted a playoff format in 1988.

The Redskins overcame the relentless Cumberland Valley running attack with countless big plays. Running back Jamar Brittingham was the guy with the most of them. The all-state candidate ran 27 times for a game-high 155 yards and two second-half touchdowns.

At halftime, with the Redskins trailing, 12-0, coach Mark Schmidt called upon his star ball carrier to change the momentum of the game. The senior did exactly that.

“I looked at him and said, ‘Hey Bud, we’re going to win or lose this thing with you,’ ” Schmidt told reporters after the game. “He’s a special young man. He got it cranked up a bit.” 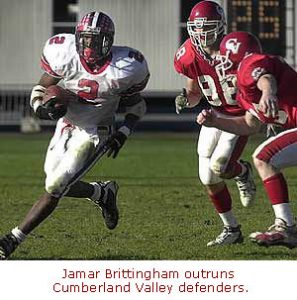 Undaunted, Brittingham went 27 yards to the Eagles’ 5 on the very next snap. The 6-foot-1, 194-pounder finished off his inspired gallop by dropping a damage-wreaking shoulder pad onto an undersized Eagles’ safety. The thousands of Redskin supporters in attendance roared with approval.

“In the first half, he was taking me down (by) the legs,” Brittingham said of the defender. “In the second half, I had it in my mind to go low and run over him.” Brittingham’s 5-yard run on the next play put Neshaminy on top for the first time, 13-12.

The two-way standout also contributed on defense, recovering a fumble forced by safety Devon Swope with 1:25 left in the game. The strip came at the end of a 17-yard pass completion that would have given Cumberland Valley a first down in Neshaminy territory.

Brittingham wasn’t the only Redskin to make good use of the big play, however. All-purpose back/receiver Keith Ennis did not finish with eye-popping statistics (28 yards rushing and 44 receiving), but every time he touched the football, he produced in a key situation.

His 28-yard catch on fourth-and-10 from the Eagles’ 29 saved Neshaminy’s hopes early in the third quarter. Fullback Geoff Donahue’s ensuing one-yard scoring run, plus the extra point, made it 12-7.

“I was calling for (the ball). I knew I could beat him,” Ennis said of the Cumberland Valley cornerback whom he out leaped to snare the crucial pass. “Jay (Wiater) threw a great ball to the outside. I just went up and caught it.” 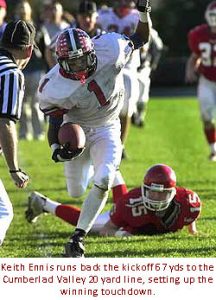 The senior also returned kickoffs for 44 and 67 yards. The longer one occurred with six minutes to go in the game, just after Cumberland Valley had tied it, 19-19, on a 41-yard touchdown run by Casey Milligan.

Thanks to Ennis’ big runback, however, Neshaminy took over at the Eagles’ 20. Four plays later, on fourth-and-two, Brittingham broke free for what would become the winning score, a 12-yarder.

During their sustained second-half rally, the Redskins also made things happen on special teams.

In the second minute of the fourth quarter, junior Erik Pederson, a back-up quarterback and linebacker, blocked a Cumberland Valley punt. Mike Loveland, a senior receiver, snared the ball out of mid-air at the Eagles’ 19 and raced into the end zone.

The score was Neshaminy’s third in less than 14 minutes, making it 19-12. Still, the game was far from decided. 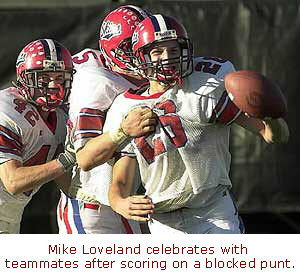 But Loveland, one of a long list of veterans on the team, had a feeling the Redskins would finish off the memorable victory. He felt the same way at intermission, even with Cumberland Valley holding a two-score lead and outgaining the Redskins 181-92 in the first half. Neshaminy went on to even the statistics in the second half and surpass the Eagles in the most important category, points.

“We knew we would do it somehow,” Loveland said. “You’ve just got to concentrate, stay in the game and calm down. A lot of times, people get all worried and make mistakes.”

“Ah, we’ve been (behind) before. These guys know what that’s about,” Schmidt said, almost shrugging off the clutch comeback as an everyday occurrence. “It was a bigger crowd, a bigger facility, but it’s the same old story. “Everybody just did their job, shook off the bad and tried to keep working the good.” 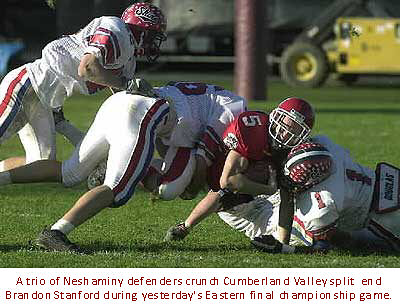 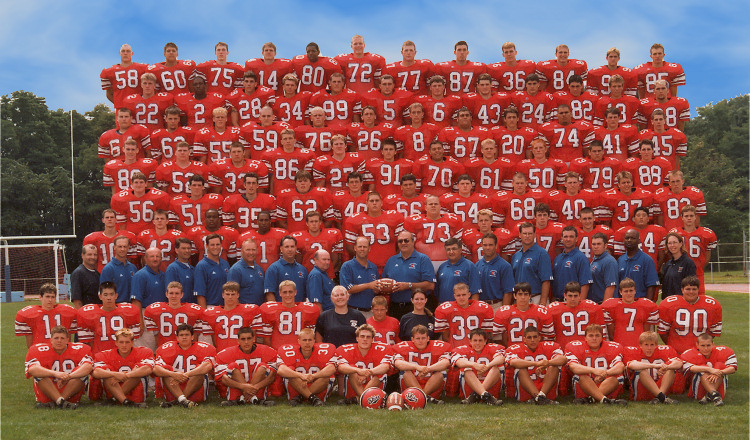 (Editor’s Note: Jamar Brittingham, as always had a great game and was a big factor in this win. But Keith Ennis, often playing in Brittingham’s shadow, made several great plays that stood out as momentum shifters and game winners. Ennis’ leaping 28 yard catch on 4th and 10 early in the third period kept the desperate ‘Skins hopes alive and allowed them to gain momentum for the first time in the game. That catch, deep in Eagles territory, set up the ‘Skins first touchdown. Then it was Ennis’ 67 yard kickoff return to the Eagles 20 in the closing minutes that setup the go-ahead touchdown. Ennis was also stellar on defense as he shadowed the Cumberland Valley receivers all day.

The weather for this game was beautiful, but it was short lived. Just one week later, on this same field, Neshaminy and Woodland Hills slugged it out in cold driving rain. The gridiron was reduced to mud and slush as the AAAA game was the last of four games played that weekend. However, that’s another story.)