Saturday, November 14, 1964. In another of the legendary early '60s slugfests between coach John Petercuskie's high flying Redskins and their mirror image, Earl Baugher's powerful Falcons of Fairless Hills, the 1964 classic was true to form. Featuring the superhuman grid abilities of Neshaminy's Hall of Fame, all-state and all-everything quarterback, Jimmy Colbert, the Tribe's team of that year was destined for greatness as it sought to pin down Neshaminy's 13th straight championship season that fall afternoon. There was just one obstacle in its path − Pennsbury!

Getting down to the task at hand right out of the gate, and jumping out to a 14-0 first quarter lead over the Birds, the Indian Moleskinners were hanging on by a thread late in the fourth. In fact, Baugher's Bullies had closed the gap to just one point, 14-13, and seemed poised to take the lead. Would the Falcons push the winner across the goal line or were Neshaminy's defensive "Savages" up to the task of stopping the potent Falcon attack?

If they put the Neshaminy-Pennsbury football game of last Saturday afternoon on television, it would have to be a sustaining program. No sponsor would touch it with a 10-foot pole.

“Who ever heard of the big game being decided by one point?”

On top of that, press releases on the show would have to say that he game was decided by one point two years in-a-row. The critics would have a field day with that. 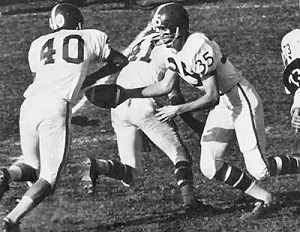 Now, it’s true that some of the elementary school children in both the Neshaminy and Pennsbury school districts, enjoy these heart thumping “dramas,” but it is questionable whether the sophisticated juniors and seniors in the two high schools could really believe all this “jazz” about the big game being decided each year by one point.

This may have been alright in the days of the Andy Hardy Series, but it just isn’t realistic enough for the budding scientists and businessmen in high school today.

Believable or not, Neshaminy High School’s football team retained possession of the Section One crown in the Lower Bucks County League, by scoring a 14-13 victory over Pennsbury before a standing room only crowd of better than 10,000 fans at the loser’s field.

Pennsbury, the last LBCL school to register a triumph over the Redskins on the football field, (7-6 in 1957), dropped its second one-point decision to Neshaminy in two years. A year ago at Neshaminy, the final score was 21-20.

Before the contracts for the 1965 game are signed, both coaches had better sit down and hire a new “script writer.” One more “show” like this one and there’s no telling what might happen to the “ratings.”

Neshaminy took advantage of “Mother Nature” to score a quick pair of touchdowns in the first quarter and then put up enough defense to make it stand up.

Pennsbury was forced to punt three times in the first quarter into a very strong wind. Dwight Kerr was only able to get off boots of 16, six and 17 yards, respectively. Neshaminy capitalized on these breaks and cashed in for scores after the first and third punts.

Bill Kaminski bolted off his own left tackle, found some daylight and raced 39 yards for the first Neshaminy score, with the clock showing 6:43 left in the opening quarter.

Quarterback Jimmy Colbert went over from the two with six seconds remaining in the period to cap a three-play, 42-yard march, for the second score. The key play was a 38-yard aerial from Colbert to end Andy Irons.

George Nolte kicked the extra point each time to give Neshaminy a 14-0 lead.

Pennsbury took up most of the second quarter to score a touchdown and get back in the game. Tackle Dave Pursell intercepted a Colbert pass, which had been deflected by a team-mate, early in the second period. 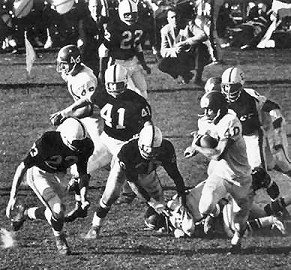 A 15-yard penalty tacked on the play gave the Falcons a first down on their own 48. Fourteen plays later (1:15 to go in the half), Joe Hodgson carried it over on Pennsbury’s power sweep play around right end. Bob Burkhart cracked into the end zone for the conversion.

Pennsbury drove 89 yards and 35 inches midway through the third period only to lose a touchdown and possession on a fumble at the one inch line. Burkhart lost the ball at the goal line and Kaminski recovered.

Neshaminy couldn’t gain much ground and punted (into the wind) on third down to its own 34. Pennsbury marched right back down the field and this time, early in the final period, Burkhart dived over right guard for the final two yards. 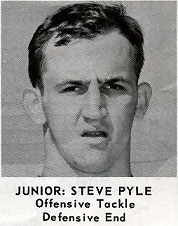 Pennsbury tried the exact same play for the extra point, which would have tied the contest, but the center of the Neshaminy forward wall stiffened and stopped Burkhart and he fumbled the ball.

In the final minutes of play, Pennsbury marched from its own 22 to the Neshaminy 41 on three completed passes but time ran out on the Falcons.

The victory gave John Petercuskie’s Redskins a 3-0 Section One record and 8-0-1 log in all games. Pennsbury is 2-1 in league play and 8-1 overall. Each team has one game remaining against Delhaas.

Editor’s Note: My-oh-my, those Redskin-Falcon battles were struggles for the ages and 1964 was another gem in jewel pile. Each year seemed just as before as the unbeaten ‘Skins would line-up against an also unbeaten or perhaps one-loss Pennsbury club. And a title would invariably be up for grabs with the two titans of Southeastern PA vying for supremacy in the LBC Section 1 League and later the Big 5 and Big 6 as well. Meanwhile, though, the 1964 Neshaminy team seemed like just another cog in the Petercuskie machine as they rolled though their season without a loss. With junior Jimmy Colbert taking control as an under-center-quarterback − and the change from the single wing to a wing T offense designed to accommodate his skills − along with Ted Boerckel, Billy Kaminski and Jerry Barr in the backfield and Denny Auckland and Andy Irons at the ends, it was quite an offensive lineup. As to the defensive side of the line of scrimmage players like Steve Pyle, Jack Dunn and Jimmy Walker were fearsome. And Pyle and Dunn were good enough to be elected Co-Mr. Redskins along with Fred Tragemann. Others helping that year included Mike Clarke, Mike Trimmer, Rich McHale, Pete Vosburgh, Bruce Sauerby, Fred Conger, Tommy Thompson, Eric Hutchinson, Ernie Forchetti, George Nolte, Tom Munski, Rich Foley and others.