Friday, September 5, 1969. The last three years have seen the 'Skins come up short each time against Dick Bedesem's powerful Bishop Egan Eagles − the Philadelphia Catholic League's premier club of the mid-60s. In fact, the Tribe was in the midst of some rebuilding after head coach John Petercuskie's departure and hadn't scored a point on the PCL kingpins since 1965 when they brought the Eagles down to earth, 41-0. And although Neshaminy managed to put 14 on the board in the first half of the 1969 edition of the annual slugfest, it really wasn't as close as the score seemed to indicate. But in the final 24 minutes of the battle at the Ridge, halfback Steve Sroba, soccer style kicker Chris Bahr and a determined Redskin defensive unit featuring linebackers Mark Mattingly, Mike Emanuel and Tim Kelly along with down-linemen Tony Fisher and Ken Johnston, decided enough was enough and took matters into their own hands.

And Swartz, savoring Neshaminy’s first win against Egan in four years, was enjoying every minute of the post-game hand shaking and back-slapping.

If you would have seen him a year ago at this time (when Egan beat Neshaminy 13-0) and seen him last night, you might have thought you were seeing a different man.

The creased frowns were gone.

And Jack Swartz, after rattling off a long monologue of technical hows and whys of the feat, didn’t know which players to praise.

“These boys are a darn good football team,” he finally admitted. “The whole team.”

Egan Coach, Dick Bedesem, was going through what Swartz went through last year. “We got beat,” he said, “I can’t say anything except I’m disappointed. Jack did a heck of a job getting them ready. He has our congratulations.”

The small foot of diminutive soccer-style kicker Chris Bahr booted three decisive extra points and halfback Steve Sroba rolled for a pair of second-half touchdowns which brought the Redskins back.

The game had to be one of the most exciting back-and-forth affairs in the history of the series, which now stands at 7-3 in Neshaminy’s favor over 10 years.

Egan rumbled to a 12-0 lead in a little over 10 minutes of the first period. Fullback Dennis Malloy broke several tackles and scored on a “bounce” play from 15 yards out at 7:31 for the first touchdown. Egan’s Joe Polweller intercepted a Neshaminy pass nine plays later on the Eagles’ 39-yard line and halfback Ed McDowell, with extra-ordinary speed, raced 56 yards for the 12-0 lead on second effort from the line of scrimmage.

Thirteen seconds later Neshaminy was on the scoreboard and looking for more. Redskin Dale Forchetti personally took care of Egan’s long shutout against Neshaminy with an electrifying 85-yard kickoff return at 2:36. Two plays later and Egan’s McDowell fumbled and Neshaminy’s guard Mark Mattingly recovered on the Eagle 18. Seven plays later fullback Andy Koch blasted in from the one. Bahr then booted his second extra point for a 14-12 Neshaminy lead.

But Egan “found” itself and roared back for 12 more points in the second period. Bahr punted a ball just three yards out of bounds to set up the Eagles at the Neshaminy 13, and halfback Bob Lamina scored easily from the 10 after some neat quarterback faking. Egan tried a pass for two extra points to close the gap, but the attempt failed and the score remained 18-14, Egan. 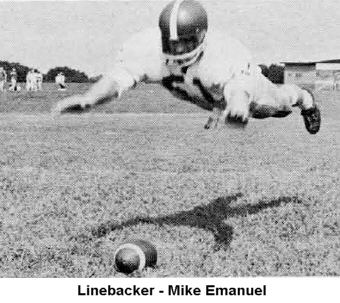 Four minutes later Neshaminy was forced to punt and Egan’s Lamina took the ball on his own 18. He slipped the ball to McDowell on the criss-cross and McDowell zig-zagged 82 yards for a touchdown and a 24-14 lead. An extra-point run failed.

In the second half Neshaminy made a defensive strategy change and took away Egan’s around-the-end running game. The result was a pair of Egan goose-eggs on the scoreboard.

Meanwhile, the Redskin offense went to work, taking the second-half kickoff and storming 59 yards in ten plays for a score. Quarterback John Swartz, son of the coach, threw the only complete pass of the drive on a clutch third down play to keep the drive alive. Sroba barreled over from the two, and with Bahr’s placement, the Redskins trailed by just 24-21.

Egan’s inexperience at quarterback and Neshaminy’s aggressiveness on defense became evident in the fourth period when Mike Friel fumbled twice and both bobbles were swarmed over by Redskin defenders.

Neshaminy’s tackle Tony Fisher pounced on the first loose ball at the Egan 36. Koch plunged for two yards, and then Sroba maneuvered around the right side, cut back left and saw daylight for a 27-24 Neshaminy lead. Bahr, after a penalty, missed the PAT from 22 yards away, and Egan started marching with the kickoff.

Coach Dick Bedesem’s Eagles went from their own 36 to Neshaminy’s 21 before Friel fumbled and Redskin Mattingly recovered. Neshaminy’s next drive stalled, but Bahr’s booming 46-yard punt put Egan back in its own territory for its final unsuccessful series. Redskin end Ken Johnston creamed Friel on a third-down pass with 1:06 remaining to just about wrap it up. 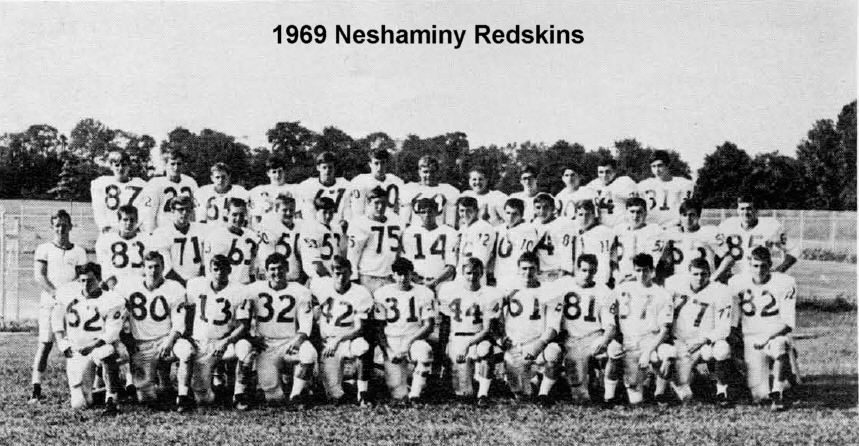 Sroba emerged as Neshaminy’s leading ball-carrier with 96 yards gained in 16 carries and two touchdowns while McDowell raced 131 yards in 14 tries for Egan. Add another 82 yards for McDowell’s TD punt return and the fleet Eagle accounted for 213 yards and two touchdowns.

Editor’s Note: The 1969 Indian club was a tough bunch that battled through the season to help post head coach Jack Swartz’ second consecutive 7-4 season. And the opener against Egan was classic ’69 as it featured the ‘Skins great running back Steve Sroba, that year’s Mr. Redskin, and Chris Bahr’s magic foot. Additionally, the athletic skills of sophomore Dale Forchetti were first put on display in that Friday night match-up. Never a disappointment, Forchetti would dazzle the crowds with his kickoff and punt returns, along with his pass catching antics, for the next three years. As to the team, they lost a couple of close ones and were within a whisker of a 1 or 2 loss year as they continued the momentum started by the 1968 squad. Paced by Sroba on offense, Andy Koch, Ed Romanowski and Johnny Swartz shared the backfield duties while Ricky Rosenblatt, Phil Silas, Dale Edwards, Charlie Bean, Rich Wisneski, Ron Clark and Bruce McHale anchored the line. On the other side of the ball Tony Fisher, Alex Wasilov, Mark Mattingly, Tim Kelly, Mike Emanuel, Ken Johnston, Bob Van Horn, Brad Keppley, Dennis Smith, Reed Madden and Vance Forchetti spearheaded a stingy defensive eleven. Additional important support came from Mike Holmes, Ricky McIntyre, Charlie Gearhart, Bruce Traney, Walter Justice, Bob Durland, Jim Seitz, Scott Mason, Jay Sidman, Pete Cordelli, Joe Chamberlain, Dave Pyle and others.