Saturday, September 22, 1984. It's a whole new ball game for the Redskins as former Bishop Egan boss Dick Bedesem has returned from the college ranks to head up the Neshaminy program. And after a few years of less than hoped for performance, the Langhorne fans are happy the old Eagle has brought his seasoned hand to the Moleskinners side of the field. Now in their third game of Bedesem's first season at the helm - and even at 1 and 1 following a tough 3-point loss to North Penn Knights the week before - the Tornadoes of Trenton Central are also proving to be a stubborn foe. In fact, with Neshaminy on top by a point, 7-6, following a late fourth quarter score by the Tornadoes, Trenton doesn't hesitate with its decision. As the Tornadoes go for two, a 'Skins defense that has been the glue holding the Creekmen together was on the carpet yet again.

Did the defensive Savages have one last play left or would the trip back home across the river be as quiet as a funeral? Read and watch!

TRENTON – Neshaminy High School’s Dan Santhouse is not the type to brag. In fact, you’ll find the junior defensive back criticizing his mistakes rather than basking in well-deserved glory. 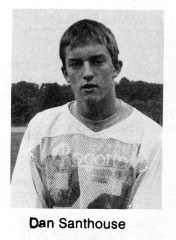 “I don’t think they should have scored,” said Santhouse after the second-ranked Redskins (2-1) held off Trenton Central (0-2), 7-6, in a non-league battle Saturday. “It was all my fault. I’m supposed to contain the outside and I got sucked in and they shot out. I should have been there.”

Santhouse was there when it counted.

It was the 5-9, 140-pounder’s 48-yard punt return down the left sideline that set up the Redskins’ only score. Running back Earl Brown dove in from two yards out for the score on the ensuing play.

It was Neshaminy’s only scoring opportunity. In a disappointing offensive outing, the Redskins managed just four first downs (only one in the second half) with 110 total offensive yards.

The Neshaminy defense supplied the big plays in key situations while the wishbone offense continued to sputter.

Defensive end Sean Dugan was credited with a game-saving tackle. After Trenton’s Darren Rhodes scored from five yards out, Dugan tackled quarterback Anthony Johnson in the backfield in a bid for a two-point conversion. 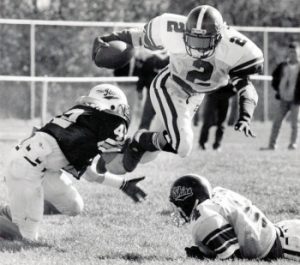 With Trenton driving on Neshaminy’s 13-yard line, defensive back Phil Lange intercepted a pass in the end zone. Defensive tackle Joe Christy recorded a sack and a blocked pass during the threat.

Defensive end John Hemple forced a fumble, which was recovered by Dugan, with a heavy crunch against Johnson in the opening minutes of the fourth quarter.

“I’m pleased with their performance,” said Neshaminy head coach Dick Bedesem. “It’s tough coming over here on a Saturday afternoon without any spirit or people here. It’s kind of flat like an afternoon practice. It’s hard for the kids to generate a lot of spirit, zip and everything else.”

“We knew they (Trenton) had a ton of talent, but we just didn’t think they could play as well as they did. Of course the penalties hurt us. Every time it looked like our offense was getting something going and we were moving the ball, we were hit with a penalty. That kills you.”

It was never more evident than on Neshaminy’s opening fourth quarter drive. After a successful fourth-and-three attempt on Trenton’s 18-yard line, the Redskin were guilty of a clipping call. The flag moved Neshaminy back to the 30 with a fourth-and-19 situation. The drive vanished.

“I thought we were going to put points on the board, but we didn’t do it,” said Bedesem.

Although pleased, Bedesem was far from satisfied with the performance given one week prior to the Suburban One league opener against Bensalem Township.

“I feel very apprehensive,” said Bedesem about the opener. “We need a lot of work. We need better execution and more aggressiveness before we enter the league. Otherwise we’ll be in trouble.”

Editor’s Note: As it turned out, Bedesem’s concern about the Bensalem game was not warranted as the ‘Skins won handily, 28-0. And the season proved to be a strong turn-around year too as the red and white Langhorne boys posted a 7-3 overall record – their first winning season since 1980. With that campaign serving as the catalyst, the ‘Skins continued up the slope as 1985, 1986 and 1987 saw them gain in confidence and wins − culminating with the 1988 team that finished the regular season at a perfect 11-0 while earning a berth in the first ever statewide PIAA playoff. But with all of that still in the future that September Saturday in Trenton, it was the determined effort of a tight knit group of Redskin players that harkened back to past years when the ‘Skins appeared to be nothing less than an unbeatable − and magical − Harry Houdini/John Elway act. Lead by tough seniors like Bill Wagner, Joe King, Brian Fults, Joe Christy, Earl Brown, Dan Monaco, Sean Dugan, Dave Megahan, Mickey Ford, Dave Reif, Jack Meier, Ron Rhoads, Ron Williams, Dave Weisner, Mike Hermans, Tony Dougherty, Doug Kohler and Mike Downs, the 1984 Neshaminy Redskins football club also enjoyed the help of underclassmen in the form of Dan Santhouse, Tim Ford, Chuck Gettis, Terry Murphy, Steve Dorwart, Phil Lange and others as well.