Friday, September 21, 1962. The 'Skins head to Easton for the fourth game of their newly minted series with the pride of upstate Pennsylvania, the Red Rovers. Not just tough on their local opponents, the Dawgs are a statewide power. Neshaminy, no shrinking violet itself, has been touched just twice in the previous 44 contests (both times by Easton, 13-7, with their other match-up going in the books as a tie, 13-13). No longer content with those marks in the "L" column, and with a tie likened to kissing your sister, the talent rich and fired up 1962 edition of the Indian Nation piled in the bus with focused determination on its collective mind. And with standouts like Bob Baxter, Bob Barr, Bill Brundzo, Tom Preno, Milt Rassier, Bob Cummings and others wearing the red, white and blue of Neshaminy, this time things might just turn out differently.

‘Greatest Jinx’ For Redskins Now
In The Past

EASTON − Neshaminy High’s greatest jinx is now a thing of the past.

It was the 12th straight victory for Neshaminy but only the first in history against the Red Rovers, the only team to beat the Redskins in the past three seasons.

Touchdowns by end Milt Rassier on a 27-yard pass from Bill Brundzo in the first quarter and by Maury Tome on a three-yard plunge in the third period provided Neshaminy with its margin of conquest.

Easton, a 13-0 chaser at one point, tightened the gap with its lone TD via halfback Jim Patterson’s 64-yard gallop on the last play of the third quarter.

However, Neshaminy regained its defensive poise in the late going, thereby defeating the only team ever to beat the Redskins twice in recent years. 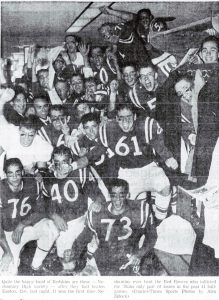 Since there were no interceptions and only one fumble (recovered by John Reeves of Neshaminy), the outcome of the contest rested solely upon down-to-earth football instead of “breaks.”

And in that type of competition, Neshaminy had the edge: collaborating its familiar hard-nosed single-wing ground game with timely aerials.

The Redskins used the airlanes for the bulk of their offensive movement in the first TD drive, and then stayed strictly on the ground en route to their second touchdown.

The first six-pointer culminated a drive of 61 yards in 11 plays following the kickoff. It was jacked to seven points on Bob Baxter’s placement. The second TD ate up 66 yards in seven plays.

Rassier, in addition to his touchdown, made a key grab a few plays previous which helped set up that first score. It was a 29-yard heave from Brundzo which the six-foot senior had to snarl from three defenders in a splendid leaping catch. 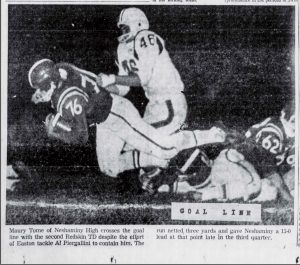 The completion put Neshaminy on the Easton 18 but a penalty pushed them back to the 27 from which point Brundzo spotted Rassier in the left corner and let fly with the pitch.

Biggest ground gainer in the third-quarter touchdown drive was Baxter’s 23-yard carry to launch the series. It was followed in order by an 11-yard haul by Tome, a nine-yard sprint by Tom Preno, a one-yard gain by Baxter and successive carries of 15, four and three yards by Tome − the latter for the TD.

At this point (seconds left in the third quarter) it appeared Neshaminy was home safe. But the next play from scrimmage changed that outlook in a hurry.

Speedster Patterson then took a handoff at the Easton 36, cut through the middle, tore to the left to outdistance the Redskin secondary and neatly reversed his field en route to his lengthy scamper.

A bad pass from center forced place-kicker Dale Harrison to run for the vital PAT but a host of ‘Skin defenders boxed him in on the right side far short of the goal line.

After that, Easton got the ball only one more time. The Red Rovers advanced to the Neshaminy 38 but were stalled three yards shy of a first down and punted.

The boot bounced into the end zone and Neshaminy took over on its 20, never again surrendering possession to its host.

Baxter reeled off nine yards on first down but then two plays, one an incomplete pass, netted nothing and the ‘Skins were faced with a problem: punt or try for a first down which, if unsuccessful, would give Easton the ball some 30 yards from pay dirt with about five minutes remaining.

The Redskins gambled. Tome hit the line and gained the first down by inches, enabling Neshaminy to run off 10 more plays to consume the final three minutes.

One of the game’s earlier highlights was Neshaminy’s 77-yard drive to the Easton nine the second time the ‘Skins had possession after their first touchdown.

A loss moved them back to the 11 where two pass patterns failed (the latter when Brundzo over-shot Preno all alone on the left side), allowing Easton to escape unscathed in a crucial situation. 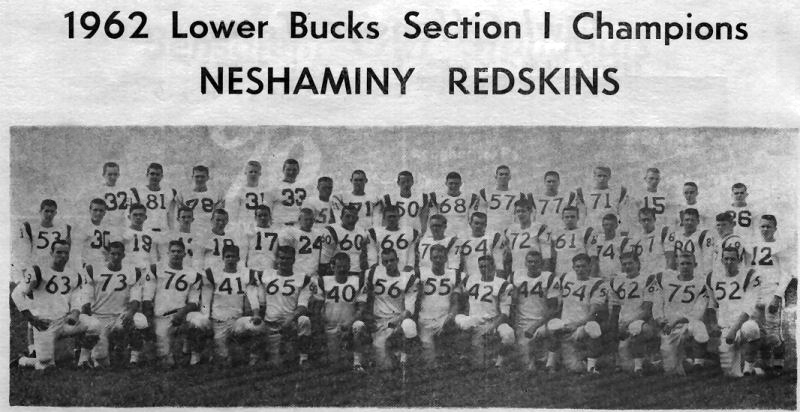 Editor’s Note: With the “jinx” now thrown off Neshaminy’s back by ‘Cuskies third year squad, the Redskins were ready to rumble. And even though the week that followed saw them a bit flat against Allentown – they tied 14 all as a last second field goal by the Creekmen fell just short of the crossbar – the Indian Nation ramped it up and actually wouldn’t feel the sting of defeat again until the opener in September of 1966. That streak was in large part due to the tenacity and toughness of the fabulous 1962 team that set the Tribe on a course during the early ’60s that has earned a special place in the history of the Redskin football program. Featuring the backfield exploits of running backs Bob Baxter, Bob Barr and Bill Brundzo – the trio was known as the Triple BB Rocket Combination − along with quarterback Tommy Preno, the team scored 397 points that year with Baxter himself good for 191 on the ledger card. Through 2007 that output by him still stands as a single season scoring record by a Moleskinner. Also helping the ‘Skins to a 10-0-1 record that year were players like Mr. Redskin Bob Cummings as well as Maury Tome, Bruce Galvin, Jerry Dorland, Milt Rassier, Ralph Basch, Rich Lauther, Ed Michael, Wesley Harris, Richard Andrews, Rudolph Kalan, John Vosburgh, John Rothrock, Mark Ciccone, Tommy Dee, John Reeves, James Jacobs and others.