Saturday, December 8, 2001. In 1999 Coach Mark Schmidt, who was then in his fifth year as the boss of the ‘Skins, guided the team to an 8−2 finish. Having put the Langhorne school back on track for success during his half−decade tenure, the outlook for 2000 was for more of the same; however, the reality was a 6−4 record that fell short of those lofty expectations. Deciding that would not happen again, the players and coaching staff started with a clean sheet of paper as well as a renewed emphasis on fundamentals (including "living" in the weight room). And right from the start, the 2001 team that followed demonstrated a belief in themselves that was evidenced by come−from−behind wins in 2 of their first 3 games (even though early there were plenty of doubters who thought those games really just evidenced dumb luck). But then a win over North Penn and the Miracle on Grass victory over Central Bucks West took the Blue and Red to 5−0 and had those non−believers beginning to whistle a different tune.

Fast forward ten games that year and the Creek Kids suddenly found themselves in Hershey playing not only a football game with a juggernaut Woodland Hills team but also the role of underdog to the Western Pennsylvania powerhouse. And it wasn’t much of stretch for all the "experts" around the Commonwealth to reach the latter conclusion as the 4A "Final" was a match−up between a squad that had dominated and crushed every opponent in its path while the other had reached the pinnacle by perfecting the art of coming back from the dead week after week. In fact, the "odds makers" had installed the Wolverines as three touchdown favorites.

Would Coach Schmidt and his charges be able to go to the well one more time or was the Harry Houdini season destined to come up just one win short?

HERSHEY − In the rainy December chill, on the slop of a football field, among the mud and muck and gunk, it happened. 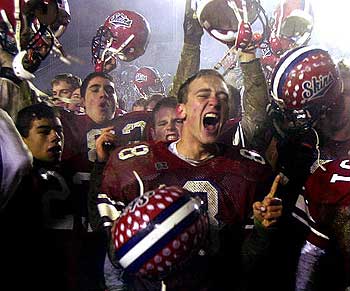 They’re the champs! Neshaminy players and coach Mark Schmidt celebrate their 21−7 Class AAAA title victory over Woodland Hills yesterday in Hershey. The win gives Neshaminy its first state football championship.The Redskins (15−0) pulled off the soggy victory in the fashion they have so often this year − coming from behind with two second−half touchdowns.

“You can’t describe it,” said Neshaminy linebacker Pat Carroll, his smile nearly aglow, his body encrusted with mud. “I don’t think I’ll ever feel like this again.”

Like war−torn gladiators, caked in dirt and sweat, emblazoned with determination and dreams, the Redskins soared into history yesterday, beating Woodland Hills, 21−7, in the glorious Mud Bowl.

The Redskins are the first−ever area football team to bring back a AAAA title to Lower Bucks.

“It was the greatest game,” said Neshaminy quarterback Jay Wiater.

It wasn’t easy, though.

Sure, the score has Neshaminy by two touchdowns, but the anxiety was thick and heavy for most of the evening. 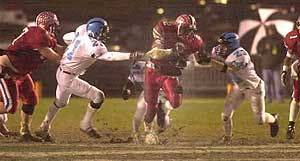 It was Brittingham and only Brittingham. It was like Schmidt declared: “Try and stop our man” − the guy who entered the day with 28 touchdowns and 2,418 rushing yards.

On the opening drive, Brittingham rumbled for 48 yards on seven carries and even nabbed a 5−yard pass. He was involved in all eight plays of the Redskins’ first drive. And even though, the Redskins failed to score − they missed a 32−yard field goal − it was a portent of play calls to come.

Steve Brett (77) and Brian Burke, right, of Neshaminy have plenty to cheer about following the Redskins’ victory over a devastated Woodland Hills’ team.

For most of the evening, Brittingham slipped and slid, rumbled and rolled and splashed on the swamp of a playing surface. He ran the ball 30 times for 157 yards and two touchdowns. He also caught four passes for 96 yards.

“It was hard out there. It was hard running because it was so wet,” Brittingham said. “I just ran for power. If I happened to break a tackle, then I’d break free. The game plan was power.”

All Schmidt had to do was mix it up a little bit.

And he did just that − perfectly.

Note the second drive of the game: The Redskins started on the 32−yard−line of Woodland Hills − beautiful field position.

And they took advantage.

The offense diversified its attack and spread the ball around. 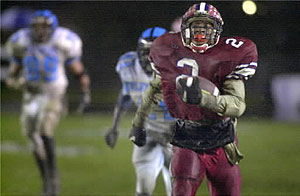 Collins pounded through the line for four yards, and then polished off the drive with a 3−yard touchdown run. The Redskins botched the point−after, with kicker Kevin Kelly attempting a pass.

Neshaminy coach Mark Schmidt prays for a win − and gets it.

Still, it all looked so wonderful − as wonderful as could be, considering the sloppy environs, with the Redskins winning, 6−0, heading into the second quarter.

“We knew we had to run the football,” Schmidt said.

Oh, the football gods have a way of decreeing an event of trepidation whenever the Redskins play.

Remember, this is Neshaminy − a team which routinely strolls the razor’s edge, a squad of heart−stoppers, who rallied from a 12−0 halftime hole last week to beat Cumberland Valley.

So, of course, Woodland Hills battled back when quarterback Steve Breaston scored a one−yard touchdown.

It would stay that way heading into the half. It looked as if Neshaminy had encountered an equal, as Woodland Hills seemed to have the size and speed the Redskins’ other postseason opponents didn’t have. 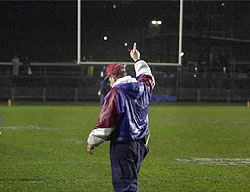 He actually was as gutsy as ever.

On Neshaminy’s first play of the second half, Schmidt made the call: Halfback option, Brittingham to pass.

Neshaminy coach Mark Schmidt signals #1 as he walks off the field after his team’s 21−7 victory over Woodland Hills for the state championship football title.

Brittingham faked a dash to the left, then coiled his southpaw arm, and winged a bomb to wide receiver Keith Ennis − a 31−yard completion.

Well, yes. During the season, Brittingham completed 5 of 7 passes for two touchdowns on similar plays. 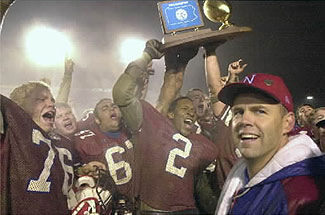 It was the Brittingham pass which ignited the fuse yesterday. He would end up scoring a 4−yard touchdown to cap off the drive he initiated with his throwing arm. And deep into the fourth quarter, he’d zip for 45 yards for the game−sealing touchdown.

Offensively, Brittingham did it again, as if he were playing on stone−dry turf, as he scored touchdowns 29 and 30, an area record.

Yesterday, it was also the tenacity of linebacker Pat Carroll, who racked up 14 tackles, the most in the game.

It was also the savvy of Wiater, who hit a variety of targets for 150 yards. Somehow, he gripped the slick ball and completed 9 of 11 passes, completing throws to four different receivers.
NESHAMINY 21, WOODLAND HILLS 7 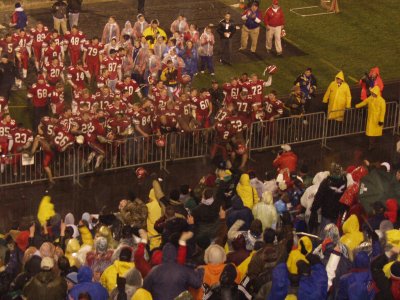 Editor’s Note: Although at the time the 2001 Redskin team may have appeared to be the recipients of “lucky bounces” and breaks, the reality is that they were a team that controlled their destiny while they were also a team of destiny. Hindsight being what it is, the passage of time clearly allows that that season saw the Tribe blessed with a group of tremendously talented players that was beautifully complimented by a fundamental “blue collar” work ethic. And they had one other “thing” too with that being a collective belief in their ability to overcome any odds, any situation, any obstacle, and any team – anything at all that might conspire to prevent them from reaching their goal of a state championship. No doubt one of the brightest stars in the universe that is Neshaminy football, their praises will be sung for years to come.