Friday, November 19, 1986. Now in his third year at the helm of the Indian Nation, Dick Bedesem had put the Redskins back on the winning path. But he was still winless against the Pennsbury Falcons as they had topped the 'Skins in the previous two years. At 7-3, though, and playing their final game of the year at Harry's House, the Creek Kids had charged onto the Ridge expecting a different result this go-round. Unfortunately, after three full quarters of play the scoreboard read like an obituary: Pennsbury 14 − Neshaminy 3. Finally deciding it was time to face the demon, and with just one last session remaining in the 1986 season, the team buckled down and managed a touchdown to make it 14-9 after the extra point was wide. Following a few exchanges, the 'Skins continued to pressure the Birds as they engineered a long drive late in the game; however, it turned even chillier than the weather when the Moleskinners found themselves facing 4th down and 17 at the Falcon 32 yard-line with just two minutes on the game clock.

Was there one last trick left up Bedesem's and the Redskins' sleeves or would Pennsbury prevail once more?

After a comeback win straight out of a movie script, it may have seemed Friday night belonged to everyone associated with Neshaminy High School football. Perhaps, however, it belonged more to Jim Dougherty more than anyone. 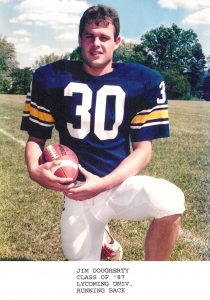 Closing out his high school career with probably his finest game, Neshaminy’s senior halfback scored the winning touchdown as the Redskins (5-3, 8-3) notched a dramatic 17-14 win over archrival Pennsbury (2-6, 5-6) in a Suburban One League National Conference Patriot Division contest.

The win, before some 6,000 at Neshaminy’s Harry E. Franks Stadium, was the first for a Neshaminy team over Pennsbury since 1977 (seven straight losses). Neshaminy, top-ranked in the Courier Times Poll, had lost to the fifth-ranked Falcons the past two years with SOL National Conference titles on the line.

This time, however, Neshaminy earned a tie for the Patriot Division championship with Council Rock, which fell to William Tennent, 19-0, Saturday.

For the night, Dougherty accounted for 134 yards of total offense with 63 rushing and 71 receiving. He scored both Neshaminy touchdowns (the first was on a 1-yard run) and caught a two-point conversion pass from quarterback Bill Vergantino after the winning TD.

“I haven’t beaten Pennsbury since our ninth-grade team did it,” said Dougherty after the game. “This is the best feeling I’ve had in a long time.”

The winning touchdown came when the Redskins were on the very brink of yet another frustrating loss to the Falcons. With a fourth-and-17 on the Pennsbury 32-yard line and only 2:13 left in the game, Vergantino faded back to pass. Dougherty, running an out-and-up pattern out of the backfield, got well behind the Pennsbury coverage and hauled in the winning toss.

“They hadn’t covered me on the play before so we went with the call,” Dougherty said. “The split end runs a curl pattern and that kind of suck the deep coverage in and I just break it off. No one really covered me.”

Dougherty then added the conversion for the final points. Pennsbury got the ball back, but Dave Paino intercepted a Shawn Ortman pass with only a minute left to preserve the win. 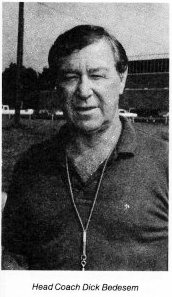 Nesahminy had taken a 3-0 lead at the end of two rather sluggish quarters for both teams. Pat Jaggers kicked a 31-yard field goal (his seventh of the year) midway through the second quarter after a Neshaminy march stalled on the Pennsbury 15.

The third quarter belonged to Pennsbury, in particular senior fullback-linebacker Craig Behnke. He scored on runs of 1 and 66 yards to stake Pennsbury to a 14-3 advantage heading into the last quarter. On the night, he led all rushers (110 yards on eight carries) and was his usual active force on defense.

“I’m big and heavy (6-1, 228 pounds) but I like to use my speed too,” Behnke said. “That long run was a 37-end run. Our end told me he was going to block down and there would be a lot of room around the end and just break it to the outside, and that’s what I did.”

Neshaminy came out with renewed intensity in the fourth quarter. After taking over in good field position (their own 47) after Behnke’s long run, the Redskins quickly marched 53 yards in nine plays to close the gap to 14-9 (the extra point kick was wide) with 9:40 to go in the game. Dougherty finished with a 1-yard plunge.

The winning Neshaminy drive started with 7:02 remaining and consumed 71 yards in 11 plays. A clutch Vergantino to Dougherty screen pass for 20 yards kept things alive on a third down and set up the winning toss.

“It was kind of poetic justice in a way that Jimmy (Dougherty) caught the winning score because he’s been such a workhorse all year,” said Neshaminy Coach Dick Bedesem. “He’s run back punts and kickoffs and done a great job blocking for our other backs.”

“I think when the kids looked up at the scoreboard and found themselves behind, 14-3, after three quarters, they were embarrassed. They just made up their minds to go after it and that’s what they did.”

Vergantino injured himself during pregame warm-ups and was a doubtful starter for a time.

“The field was hard before the game and I twisted my knee and had a slight cartilage tear,” he explained. “During the game it would feel good at times but I’d get hit and it would tighten up again. I didn’t want to come out in a game like this, though.” 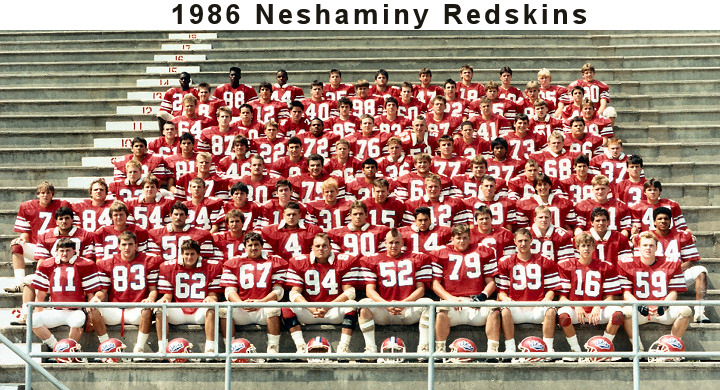 Editor’s Note: Weaving his considerable magic, Dick Bedesem had taken the ‘Skins to a co-championship of the SOL, Patriot Division in just three seasons. And the clinching win over Pennsbury in the final was pure Neshaminy − back to the wall and never say die. Played on a frozen field on a bitter day, the ‘Skins comeback victory is put into even more perspective as “tent-folding” would have been the easier choice for the Langhorne bunch. On a broader note, and not so surprising when the talent on that year’s team is considered, 1986 represented another step forward in the climb back to the top that the second-half of the 1980s was for the Redskins program. All in all, the campaign was a solid one as the Indians closed at 8-3 on the strength of players like Chuck Gettis, Bill Vergantino and Steve Dorwart who would each find their way into Neshaminy’s football Hall of Fame. Other players that played a significant role that year included linebacker Mike Bagnarelli and running back Jim Dougherty, both seniors and All-Area selections who were voted Co-Mr. Redskins as well. And with help from team mates like John Allen, John Magee, Ben Arnott, Tom Knox, John Rizzo, Dave Paino, Chris Sloan, Brad Fravet, Frank Gibson, Brett Canimore, Ralph Taylor, Keith Moss, Pat Jaggers, Phil Lepre, Fred Gross − who had two key interceptions in the Pennsbury game – and others too, it was no surprise that Dick Bedesem was voted Coach of the Year at the conclusion of that fine season.