November 1936. Yardley. Coach Charlie Beck and his Langhorne 11 played a different schedule in the 1930s. Without a Pennsbury yet to battle, the Tribe made do with Yardley and Fallsington High Schools which later became the Pennsbury Falcons in their 1949 consolidation. But the games were no less important and the '36 Yardley match-up was textbook. Traveling to the Delaware River school, the Langhorne boys found out what made the Yardley group so strong that year − a defense that didn't take kindly to giving up points.

Would the 'Skins quarterback and passing whiz, future Neshaminy football Hall of Fame inductee Chuck Klein, have enough chips to bank the win or was Langhorne destined to head home on the wrong end of the score?

The Yardley High School eleven lost a hard-fought game to the Langhorne High School football team 14 to 7 at the Yardley A. C. Field on Friday afternoon. 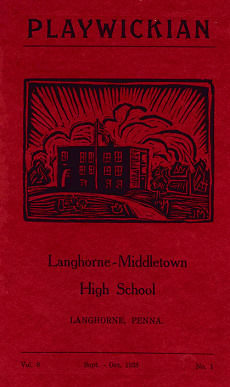 Langhorne scored first late in the opening period after a Yardley fumble deep in her own territory was recovered by Langhorne on the 9-yard line. Two line drives carried them to the 2-yard line where Yardley held on third down. Two off-side penalties where called against Yardley as they twice drove back the Langhorne team. On the fourth down, however, Langhorne scored on a short pass and converted for the point.

The second half opened with Langhorne still leading 7 to 0. Aided by a strong wind, however, Yardley gained on two exchanges of punts, carrying them to the Langhorne 33, and a 15-yard penalty took them within the 20-yard marker. Fitzgerald then went over for the score on a pass from Rothermel. Captain Tom Neely then kicked the point tying the score, the first conversion he ever attempted.

Yardley drove deep into Langhorne territory near the end of the 3rd quarter, but shortly after the beginning of the fourth lost the ball on downs. Langhorne, now aided by the wind, got off an 80-yard kick from her own ten yard stripe, which set the stage for their second touchdown. Yardley was forced to kick and the punt carried only to the 35-yard line. A gain through the line, then a pass allowed because of interference, carried Langhorne within the 20-yard line. Two more line plays yielded a first down on the 4, and Yardley was penalized half the distance to the goal line. On the first three downs Yardley drove them back, but on the last Langhorne scored on a pass to their right end.

Yardley launched another drive down the field late in the last period, coming from their own 25 to the Langhorne 24-yard line before losing the ball on downs. Langhorne had time for only two plays as the game ended.

Yardley showed considerable power on defense, and seldom did Langhorne make a first down in a single play. Early in the game Langhorne drove down the field 45 yards in 4 consecutive downs but could gain only that many more in the entire remaining game.

On the offense Fitzgerald played an exceptional game at the left end. He scored Yardley’s only touchdown on a pass from Rothermel, and was good for a long gain almost every time he was called to receive a pass. Bob Neely also figured prominently in the offense, making numerous gains through the line, and late in the 3rd quarter got free for a 25-yard gain through center. 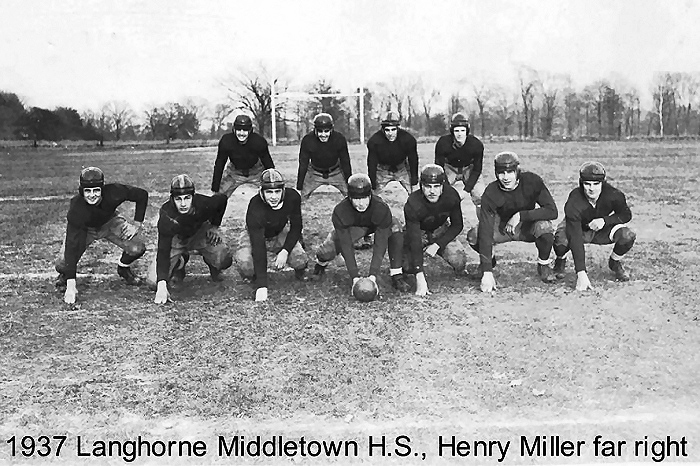 Editor’s Note: Who might have guessed in those far away days that the future would produce monumental battles between the ‘Skins and the Falcons that would come to be considered an expected yearly ritual. But even without the knowledge of what was coming round the bend, the foundation was being put in place almost from the start as Langhorne had first lined up against Fallsington Township in 1930 − just the third year the Indian Nation was fielding a grid 11. And throughout the thirties, many great contests were waged featuring early Langhorne stars including five eventual Hall of Famers who suited up for the Moleskinners during the 1936 season featured above: Bill McCahan (1936-37-38) at fullback; Chuck Klein (1935-36-37-38) at quarterback; Walter Carter (1933-34-35-36) on the line at tackle and center; Levi Derry (1934-35-36) at end; and Robert Corrigan (1936-37-38) at center.