Friday, September 14, 1956. Stepping out on to the Bux-Mont League's champion Pennridge Rams home turf, the Redskins were taking a bite at their upper-county neighbor's domain. Winners of 20 straight, the Rams were the stud club of their conference as they featured a line that had nothing but 250 pounders that wouldn't be common on schoolboy teams until well into the future. As to the 'Skins, they were the reigning Lower Bucks County kingpins but size-wise, it was even close on paper. But of course, and as they say, that's why they play them on the field.

So with Coach Harry Franks looking for more wins to put in the bank account, his charges traveled to Perkasie for a good old fashioned nose-to-nose contest featuring the Rams and the Redskins - the pride of upper and lower Bucks County playing for those all-important bragging rights.

Tough Going Against Pennridge Made “Kids” Into Football Players

PERKASIE − Lower Buck County fans should be proud of their champion, Neshaminy High, after its exhibition in beating Pennridge before 3,000 fans last night at Perkasie.

Pennridge had won ten straight last season to cop the Bux-Mont League championship and in three seasons the Rams lost but one game to Quakertown. But they never met a more determined or fighting ball club than Neshaminy fielded last night.

The Neshaminy goal line was never seriously threatened and the outweighed Langhorne forward wall threw back the Pennridge backs time and time again. Pennridge gained 114 yards through the line but 65 of this was in the final quarter when Coach Harry Franks used substitutes in his lineup.

The Neshaminy win by a 20-0 score was the ninth straight for the Lower Bucks champs, the second in a row this season. So sweet was the win, the usually non-committal coach Franks said after the game, “Boy, this was one I wanted.” 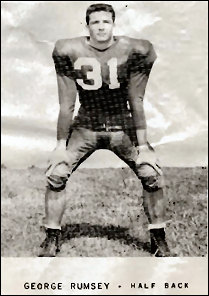 Coach Franks surprised everyone with a solid ground attack, something new in the Neshaminy agenda. After the Hatboro game, the cry was: “Neshaminy has it in the air but can’t do anything on the ground.”

This was changed last night as Neshaminy pounded the line, ran reverses and end runs to eat up 133 yards on the turf. It attempted 11 passes and completed five for 66 yards, gaining twice as much ground yardage as in the air.

Neshaminy opponents who are planning ways of stopping the Redskins’ air attack must now also concentrate on ways to meet the ground maneuvers. Upper Dublin, Neshaminy’s next foe, lost to Springfield yesterday, 20-6. 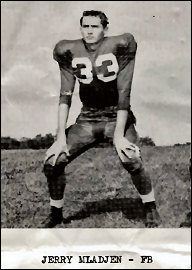 Scoring the Neshaminy TDs were Jack Reilly, Jerry Mladjen and George Rumsey. The latter place-kicked two of the conversions. Reilly scored his touchdown in the first period to give Coach Franks’ team a 7-0 lead. This stood at half time, but in the third and fourth sessions, Mladjen and Rumsey made their touchdowns.

Determined team play throughout helped the Redskins earn the win. Especially the first score by Reilly with 35 seconds remaining in the first quarter. Rumsey set up the score by running back a punt from his 14 to the Pennridge 44. On the first play, Rumsey then got off a nice run of 39 yards to the Pennridge five with Mladjen throwing a key block. From the five, Reilly took it over on an end run.

With the final two scores delivered by Redskin players, the home team took the loss while the visitors took the win. 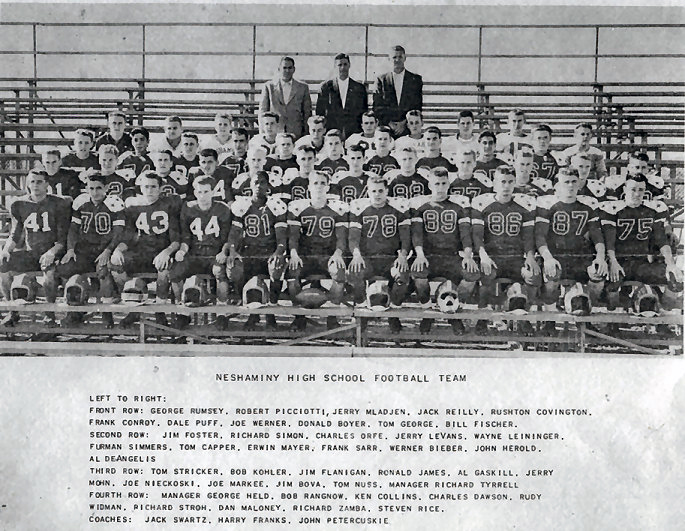 Editor’s Note: Although having played both Perkasie and Sellersville-Perkasie several times in the early thirties, the 1956 game was the first time Neshaminy took on the team that resulted from their merger − the Pennridge High School Rams. Formed by the consolidation of smaller schools in the early 1950s, Pennridge, like many districts in Bucks County, was simply adjusting to exploding post-war population growth. And the Rams were an immediate force in the old Bux-Mont league having ripped off 20 straight and delivering a perfect season in 1955. Making the Rams even more menacing was the fact their 1956 team was huge with 4 linemen that averaged 250 pounds a man − phenomenal for the time. But the Harry Franks coached Redskins were a fearsome bunch themselves as they posted a 35-5 record under the direction of the “Langhorne Taskmaster” from 1952 through 1955. Meanwhile, Franks’ 1956 club was destined to become something special as they cruised to a 9-0-1 record behind a defense that allowed just 45 points all season long − including shutting out 4 teams and holding 5 others to just one score. The ’56 club also earned Franks his fifth straight LBC title in as many years; all during his initial half-decade as the head honcho of the Tribe. Well stocked with talent, the team featured Hall of Fame players Frank Conroy, Bill Fischer, Donald Boyer, Jerry Mladjen, Al Gaskill, Richard Simon, Tom Stricker, George Rumsey and Dale Puff. Additional solid grid performers that season came from the play of Robert Picciotti, Rushton Covington, Joe Werner, Tom George, Jack Reilly, Jim Foster, Charles Orfe, Jerry Levans, Wayne Leininger, Furman Simmers, Tom Capper, Erwin Mayer, Frank Sarr, Werner Bieber, John Herold, Al DeAngelis, Bob Kohler, Jim Flanigan, Ronald James, Jerry Mohn, Joe Nieckoski, Joe Markee, Jim Bova, Tom Nuss and others as well.