Friday, September 19, 1972. In 1972 Neshaminy was playing Easton for the 14th time. And although the 'Skins had managed some solid offensive efforts against the Dawgs over the years, most of the contests were close to the vest; however, that year the Tribe had assembled another of its patented, offensive juggernauts built on the quarterbacking talents of Bobby Grupp and the all−around athletic skills and abilities of its star halfback, Joe Sroba. Still, an upset loss to Bishop Egan in the opener, by a score of 18−7, and a 25−14 come−from−behind win over Pennridge seemed to paint a different picture. But any doubts about the scoring machine that was the '72 club were about to be put to rest as fans grabbed their seats that Friday night at Cottingham Stadium, home of the Red Rovers. 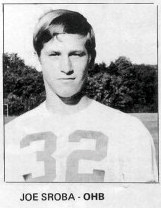 It made little difference to him that he had just tied the Lower Bucks County record for most points scored in a single game enroute to Neshaminy’s unbelievable 55−14 romp over Easton Area here Saturday night at Cottingham Stadium before 8,000 spellbound fans.

Sroba, whose six touchdowns and a two−point conversion equaled the mark set by George ‘ Ron Hancox in 1969, was more concerned about Neshaminy “finally proving to all we have a talented team capable of beating anyone.”

As Sroba peeled off his football gear following the Redskins’ impressive opening win in the Big Seven Football Conference, he thought back to Neshaminy’s so−so showings in their two previous contests.

“When we lost to Egan (18−7), I was really hurt. I knew we had a fine team and a tremendous coaching staff. The talent was there but we made too many mistakes that night.”

“Then when we had a strong second half last week against Penridge [in a 25−14 victory], I knew we were coming around.”

But Sroba was well aware many still had written the ‘Skins off as a contender for the Big Seven Conference title.

“We were mad when we read our being the underdog for tonight’s game. In fact, Rich [Eccles, Neshaminy’s rugged 6−4, 255−pound center] was so mad he told me he had put a hole in the wall at home when he found out.” 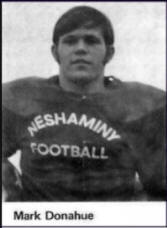 “We were determined tonight to put it all together and I think we did,” Sroba said with a slight grin.

From the opening kickoff, which Mark Donahue took at his own 16 and stormed upfield before being stopped at Easton’s 13, it was quite obvious Neshaminy had just one thing in mind: To win Big.

The Redskins quickly put 21 points on the scoreboard in the first period and were on their way to amassing 456 net yards.

Sroba was unquestionably the vital cog in handing Wayne Grube’s winless Red Rovers their third setback of the young season. 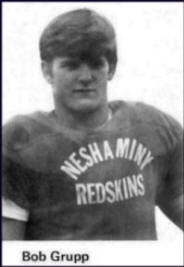 In the first period he scored on a one−yard run and an 80−yard punt return and also ran for a two−point conversion following Donahue’s one−yard plunge for the ‘Skins second score.

In the second period Sroba, a 5−9, 190−pound senior speed merchant, added 12 more points to his total via a one−yard run and a 40−yard pass reception from quarterback Bob Grupp.

Then following fullback Len Barker’s one−yard plunge for the ‘Skins sixth score in the third period, Sroba recorded his fifth touchdown of the game on a 52−yard run off left tackle in the waning moments of the quarter.

Sroba’s final six−pointer came in the fourth quarter when Grupp hit him with a 51−yard strike. Sroba’s chance for breaking the LBC record was foiled when he was stopped one−yard short on the following two−point attempt.

“I really didn’t know anything about the record,” Sroba confessed. “Coach (Jack Swartz) hadn’t mentioned it to me until I came off the field after missing the two−point try. But that didn’t matter. I just wanted to win big tonight.”

Swartz had nothing but praise for Sroba. “He’s a great athlete, a great receiver with great moves and an all−around individual. He’s also an honor student.”

But Swartz was quick to add it just wasn’t Sroba’s performance which pleased him. “We did everything we had planned. The offense and defense both helped in making this a big win. We jumped off fast and after Joey’s punt return, we set the tempo forcing Wayne (Gruber) to do things he wouldn’t normally have done.”

Grupp was also a principal factor in the resounding victory. He completed seven of eight passes good for two touchdowns and 213 yards.

“I think he came into his own tonight,” said Swartz. “He did an outstanding job in picking his receivers, many times going to his secondary receivers.”

Extra Points − The ‘Skins defensive secondary, along with both sides of the line, completed the victory … The secondary picked off four passes thrown by Easton’s Mike Miller, including two by linebacker Bob Miller … The steals were aided by teammate Frank Conger who tipped the ball to Miler in each case …Neshaminy’s defensive wall also pounced on three fumbles setting up two scores …

The offensive line, led by Eccles, opened numerous holes, particularly for Sroba who collected 100 yards on 13 carries … Defensive back Don Dripps, who recovered a fumble in the second half for the ‘Skins, suffered a dislocated right elbow and was taken to Easton Hospital where he was treated and released … Melvis Ransom accounted for both Easton scores on runs of 11 and 79 yards, respectively … Rumor has it Grube, now in his sixth season and who guided the Red Rovers to a Big Seven title in 1968 may be removed as head coach … Both the Easton and Neshaminy bands provided halftime entertainment.

Editor’s Note: Holey Moley, thirty−eight points! Enough to capture the imagination of scholastic fans throughout the state as well as the writers of Sports Illustrated who honored Sroba with a mention in its then very popular Faces in The Crowd series which covered noteworthy athletic efforts of individuals in all sports and throughout the country. And as for Sroba, he didn’t rest on his laurels after the win over the Rovers as he proceeded to tally 146 points that campaign as he captured the Lower Bucks County scoring crown. As to the team, it was a terrific year and only a season−ending 23−21 loss to Pennsbury prevented the squad from snagging the Big 7 and LBC crowns. Back to Sroba, though, after being selected to all the local all−star teams as well making the UPI’s 2nd team all−state squad, he then earned the title of Mr. Redskin for the ’72 season −− just as his equally talented older brother, Steve, had accomplished in 1969. Sroba then went on to star at the University of Virginia where he set several Cavalier kickoff and punt return records that still stand to this day. And other ‘Skins stars from that season included Grupp, who went on to play at Duke and then the Kansas City Chiefs for a number of years. Fullback Lenny Barker carved out a long pro baseball career as a pitcher which included a perfect game for the Cleveland Indians while all−state defensive tackle Mark Strawbridge was a standout at Clemson with DB Bart Smith playing for the Yale Bulldogs. It was also a notable season for the fact that it was head coach Jack Swartz’ final year as the man in charge after assembling a 43−11−1 record during his five years at the helm. Of course, those five years were the exclamation point to his 17 years at Neshaminy as he had first come aboard as an assistant coach in 1956.