Friday, September 6, 1963. With the 'Skins reaching out to schedule the best and toughest teams they could find, 1963 saw the powerful Central Dauphin Rams of the Harrisburg area traveling to Langhorne for that season's opener. And tough they were for the Rams had posted a solid 45-5 record over the previous five seasons as they had wreaked havoc on their mid-Pennsylvania opponents. Likewise, Neshaminy was also running roughshod over the teams in the Eastern part of the state and as the squads rumbled on the field that night, the stage was set for a heavyweight 12-rounder. And with the 9,000 in attendance sitting on the edge of their seats, they wouldn't be disappointed. 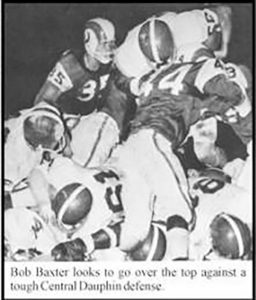 LANGHORNE– Now even the folks in Harrisburg have felt Neshaminy’s football muscle.

It was only the second loss in the past 21 games for Central Dauphin and the Rams first shut out loss in several seasons.

Bill Brundzo scored the game’s only touchdown by plowing into the end zone from one yard out with 5:44 remaining in the first half. It climaxed a 73-yard advance in 15 plays after which Bob Baxter promptly booted the extra point. 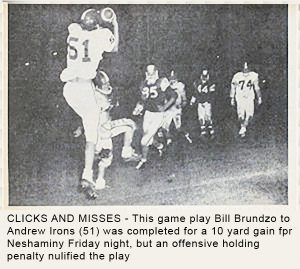 The most sizable gain during the productive series was Eric Hutchinson’s 35-yard scamper from Neshaminy’s 19 to the Central Dauphin 46 on a crucial third-down-and-12 situation.

Neshaminy had taken possession at its 21 following a punt but two plays lost one-yard apiece. Then Hutchinson took a handoff and hightailed it around the right side en route to his 35-yard pickup, the game’s longest gain.

Naturally, it provided a tremendous boost for the Redskins who couldn’t really seem to get things started until then.

Once Neshaminy had gotten its offensive lift from Hutchinson’s 35-yard pickup around the right side, the ball-totin’ chores were shared by Brundzo, Baxter and Jack Dunn.

Each took his turn as the Redskins, using their stereotypical single-wing offense, picked up short yardage en route to paydirt.

Dunn and Baxter both picked up vital yardage when Neshaminy was faced with a fourth down situations deep in Central Dauphin territory.

Dunn dived over the middle of the line to gain three yards to the 11 when the first “must” situation occurred. Then Baxter bulldozed for two yards to the one to set up Brundzo’s TD.

Central Dauphin meanwhile flirted with a touchdown at least twice.

The first serious threat came late in the first half when quarterback Dave Kelly’s pass from the Neshaminy 35 barely overshot halfback Cal Nunnally’s finger-tips. There was no stopping Nunnally had he been able to reach it.

The other threat by the Harrisburg eleven came early in the fourth quarter when a 12-play movement on the ground took the Rams from their own 24 to the Neshaminy 13 before the drive stalled at the 15.

During that final penetration, Kelly was back to pass at the Neshaminy 36 and appeared trapped for a sizable loss. However, he wrangled his way out of the jam and wound up gaining 15 yards before Brundzo − the last defender − pushed him out of bounds. 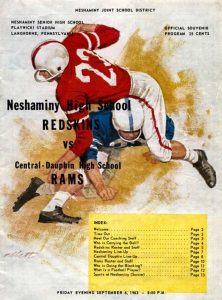 Neshaminy’s only other serious scoring threat occurred late in the last quarter. The Redskins halted Central Dauphin’s farthest penetration, took over at the 15 and in 17 plays had gotten as far as the Rams’ 10 when the game ended.

Actually, Central Dauphin didn’t have the ball long in the second half. The Rams were only able to work two offensive series because Neshaminy’s short-gain ground game ate up most of the time.

Although Nunnally and fullback Dave Correall ran well in Central Dauphin’s “Delaware Wing-T” offense, quarterback Kelly was indeed the toughest back for the Redskins’ defense to cope with. 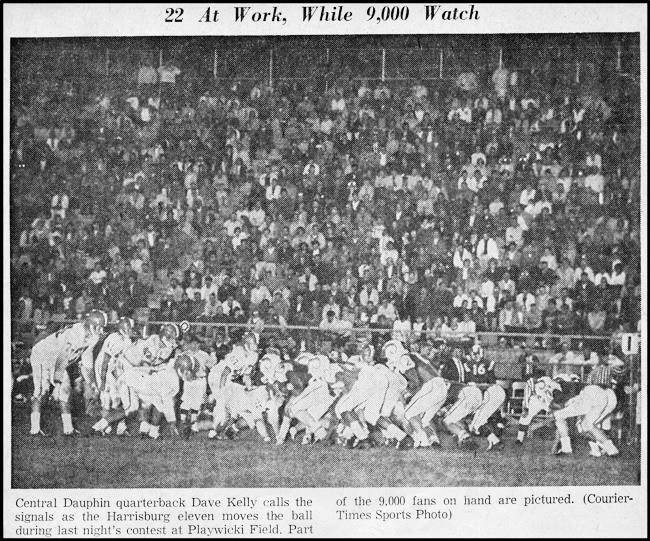 Editor’s Note: Wow! Another thriller on the “Ridge” which was a hallmark of the Redskin teams of the 1950s and ’60s. And the game with the Rams of Central Dauphin not only represented the first time the ‘Skins were playing a Harrisburg area team, it also marked the unveiling of the new “concrete” seats/stadium. With the old wooden and steel-poled bleachers having begun to show their age, the 7,500 seat capacity stadium style seating was well received. Plus with the old bleachers moved to either side of the new concrete structures on both the home and visitor sides, capacity was pushed to well over 10,000. In addition to the stands, 1963 also saw the formation of the new East-Penn League which was comprised of the Neshaminy, Easton, William Allen, Dieruff and Bethlehem Liberty high school football programs. And not missing a beat, the ’63ers weighed in at 9-0-1 as they captured both the new East-Penn crown as well as the LBC Section One title that year.