Friday, September 29, 1961. Following only their second loss in the preceding 32 games, both to Easton by a score of 13-7, Head Coach John Petercuskie and his boys of Langhorne were looking to vent their frustration. And in this case, it would be on the William Allen Canaries of Allentown. Allen was one of the two schools formed by the split of Allentown High School in the late 1950s with the other being Louis E. Dieruff. Neshaminy had first played the "old" consolidated school in 1957 when the 'Skins suffered their worst defeat of the Harry Franks/John Petercuskie "Golden Era" years, 32-7. But turning the tables, in 1958 Neshaminy returned the favor as they evened the series with an 18-0 win. So with the background established, the '61 game against the Canaries would be the rubber match. And although the boys didn't know it as they took the field that night, it would be the start of something special as well.

The final count was 28-14, which certainly indicates it wasn’t all peaches and cream for the triumphant Redskins. But realizing the host Canaries didn’t score until the final quarter, it really was.

Neshaminy, for want of a more flowery description, was very impressive. The Redskins played an outstanding brand of football that puzzled Lehigh Valley sports writers as to how they ever lost to Easton last week. 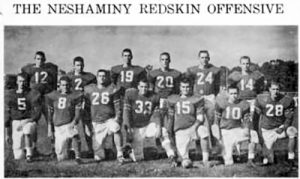 John Petercuskie’s well-trained charges marched to paydirt with the opening kickoff, then annexed a pair of second-quarter TDs to sport a 21-0 halftime advantage.

The squad’s offensive machine was spearheaded by senior half-back Ed Kaminski, who racked up the first two touchdowns and was a thorn in Allen’s side all night long.

In fact, the 5-8, 165-pound speedster passed for the third touchdown in the waning seconds of the first half after setting up the score with a 55-yard aerial from a picture-perfect triple reverse.

The Redskins paraded 84 yards for their initial six-pointer and continued the excellent offensive performance well into the second half. 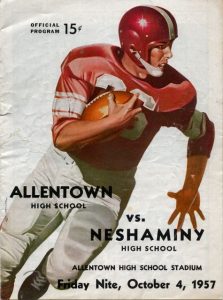 Petro sneaked across from three yards away on the first play to prevent a shutout, and then fired a 49-yard pass to end Jack Pearson a bit later.

The Canaries’ scoring stint halved the Neshaminy lead and it appeared for awhile the margin might even get closer. Allen recovered a Redskin fumble on the kickoff following its second TD with two minutes remaining, but Neshaminy dug in and that was that. 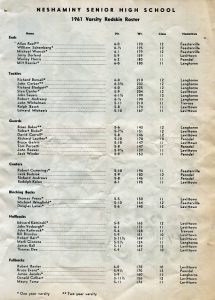 Other Neshaminy touchdowns were registered by end Al Rell and fullback Bob Baxter. Rell caught a nine-yard pass thrown by Kaminski while Baxter galloped 45 yards for the fourth tally late in the third quarter.

After each of the six-pointers, end Bill Schemberg put his toe to the uprights. Halfback Ron Flahart did it twice for the Canaries.

All in all, it was a fine showing for the Lower Bucks entry against a formidable but outclassed opponent. It was a well-earned conquest for the Redskins, who didn’t waste any time returning to the victory trail. 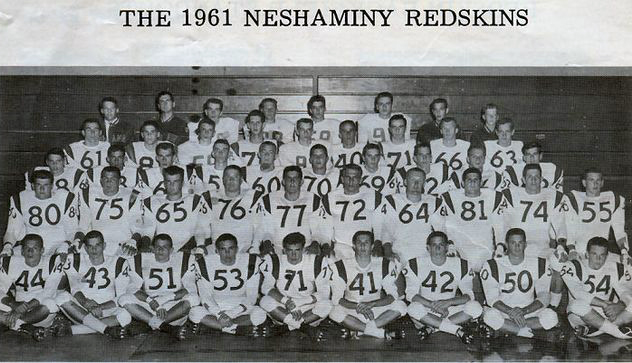 Editor’s Note: Not yet knowing it, the Redskins’ win not only earned them the 2-1 edge over the Birds, it was also the start of something big − “The Streak”. Still celebrated to this day, “The Streak” was the phenomenal 51 game unbeaten run that the John Petercuskie lead Moleskinners carved out starting with that Allentown win described above and which continued to the close of the 1965 season. Posting a 47-0-4 overall record during that period, that effort saw the ‘Skins dominate Eastern PA scholastic ball week after week, month after month and year after year. And even though not every game was a runaway win − many were come-from-behind miracles and one-point victories in addition to the four ties − the Tribe seemed charmed with its Houdini-like antics coupled with an unshakeable belief in its ability to win games. Truly, it was a remarkable era for the school and its fans which will always be recalled as a magical time.