November 1954. Ten and oh! It doesn't get any better than perfect and the Tribe's fifty-four squad was just that as they cruised through the season without a nick on their record − a first for a Redskin group. And beside the unblemished season, the point output of 349, and average of 34.9 a game, topped District 1 that year and was 5th best in the state as well. It also set the standard for Lower Bucks schools to that season which was the 36th to see scholastic football with Bristol first fielding a team in 1918. Plus whether it was the ground attack lead by "Dashing" Don Cameron and Earl "Shorty" Moronese or the air attack fueled by Errol "The Arm" Faunce, the 'Skins offense could do it all. And not to be outdone, the defense gave up just 76 points in the ten game season to insure their role was well noticed too. No doubt about it, the Blue and Red team of 1954 shone brightly as they were immediately recognized as the new benchmark for Lower Bucks high school elevens. 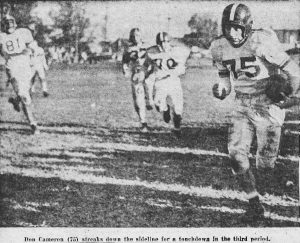 LANGHORNE − During the past 18 years there have been three really proficient schoolboy teams in Lower Bucks County.

The first was in 1936 when Bristol, coached by the last Bill Daugherty, scored 237 points to lead all Eastern Pennsylvania and Southern New Jersey high schools in TD production.

Two years later Coach John Hoffman molded a powerful juggernaut at Morrisville which won eight of ten games against strong opposition. Jimmy Yeager was the key man of the 1938 outfit.

Today for all to behold and judge is the skillful Neshaminy team which is raising havoc wherever it goes. This club appears on par with the 1936 Bristol team and the 1938 Morrisville combination.

There are some who will argue that the 1946 Langhorne team should be included as well as the 1948 Bensalem aggregation. But 1946 was mostly Wayne Schneider at Langhorne and 1948 certainly was all Eddie Oliver at Bensalem.

There is a difference between stars and teams. Schneider and Oliver carried their respective teammates to championship heights through sheer individual achievements. Then too, the overall playing strength of all teams in 1936 and 1938 may have been superior to the years of 1946 and 1948. Not unlike these days, there were some awfully good football players back then. 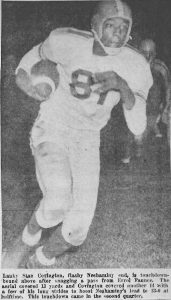 A game between the 1938 Morrisville club and today’s Neshaminy eleven would be something to see.

Back in those days the Bulldogs had Jimmy Yeager as their spearhead and no district football player with the possible exception of Bob Felver ever has appeared on the local scene to challenge Jim in football prowess.

Yaeger could do everything. He was big, fast and a triple threat. Jim could make headway on power plunges, pick up yardage on blistering end sweeps, pass, punt and play excellent defensive football.

Working with him in the Morrisville backfield were Art Baehr, Andy Gavin and Bill Talone. With Baehr and Gavin running wild alongside of Yaeger was speedy Albie Johnson at end. Johnson was District 1 PIAA half-mile champ with a one minute, 59 second effort to his credit. Baehr and Gavin were teammates on the District 1 mile relay title-winning quartet. Standout linemen were Bill Wilson, Frank Mattis and Joe Haley. 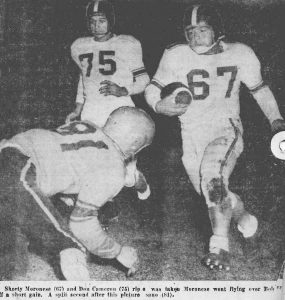 The 1936 Bristol High team was fast and rugged. It was one of the best ball-handling ensembles in regional ranks and made a business of doing the right thing at the right moment.

Coach Daughert’s greatest achievement − the Bunnies of 1936 − made 237 points in a day and age when TDs were as hard to get as a date with a movie queen. They ran wild wherever they went.

The team wasn’t big or powerful. It was well coached. The players mastered timing, employed an excellent sequence of selection on plays and was regarded as one of the smartest scholastic clubs in suburban Philadelphia.

This year’s Neshaminy eleven would stand a good chance of beating both the ’36 and ’38 squads of Bristol and Morrisville.

The manner in which the Redskin starting backfield handles the ball is befuddling, although in this respect they are no better than the Bristol gang of Phillips, Wollard, Barouth and Orazi.

Then too, could they contain the brilliant Yaeger of 1938? They might stop Jim one way, but he would come at them with other weapons using his speedy companions to best advantage.

Faunce, Cameron, Moronese, etc. operating behind a solid line are impressive, but would they be able to do business against their predecessors who also gained acclaim as great teams?

The more you think about it and recall brilliant players and plays of the past the less you like to use the term “greatest” team of all time for any one squad. Still, even among older fans that saw some pretty good teams over the years, the Neshaminy team of today might just be that group that could be called the “greatest” to date. 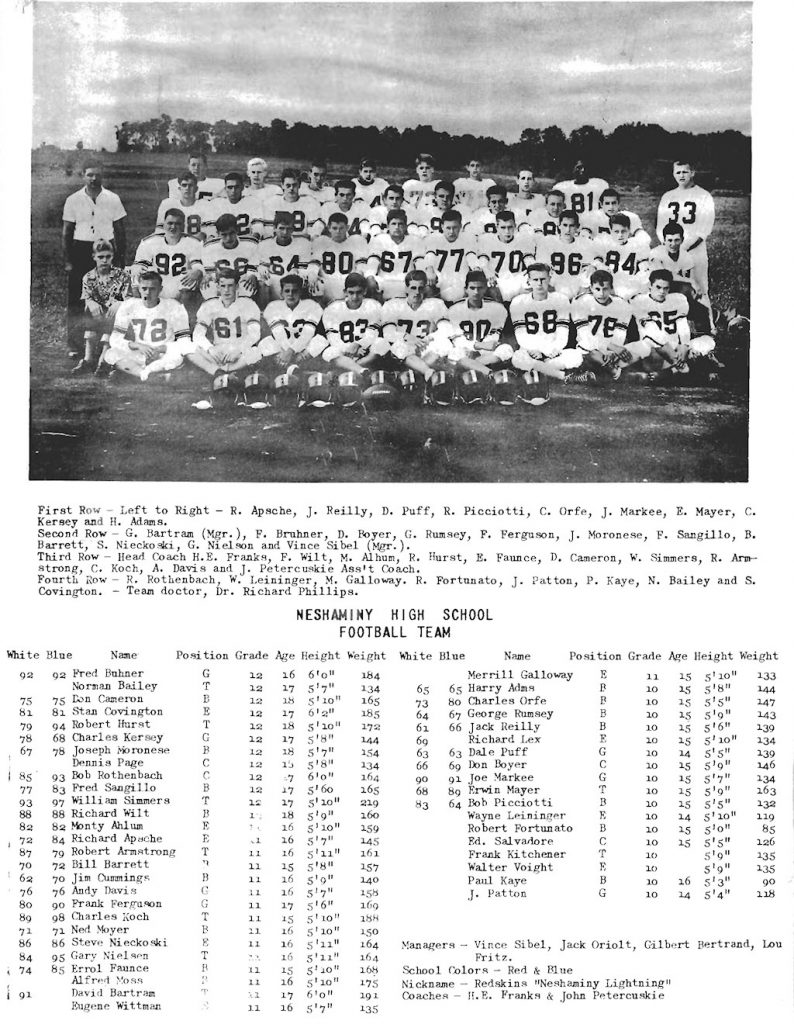 Editor’s Note: Making Head Coach Harry Franks proud, in just his third season as the head man at Neshaminy his charges had delivered the fans a season for the ages. Still, it may not be as surprising as it seems for the ’54 club was the end result of Franks’ first four years as either the head JV coach or the head varsity mentor. Worth noting too is that his overall record through the end of that effort was 35-2 with his 1951 JV club 7-0 while the ’52 and ’53 varsity teams were both 9-1 followed by the fabulous fifty-four group. Clearly evidencing a perfect storm for opponents, Franks’ driving personality and his superman players had been aiming for the top since they first joined forces. Then adding to the firepower, 1954 was also the first year that John Petercuskie had arrived on the scene as Coach Franks’ assistant − and that certainly didn’t hurt the team’s chances one bit. Surely, that season, although perhaps not known by observers of the time, was the line in the sand that marked the arrival of Neshaminy as one of Pennsylvania’s premier high school football programs; however, and as evidenced by his article, at least Jack Gill had an inkling of what local fans were witnessing.