Friday, November 19, 1963. In what would prove to be the first of three razor thin wins, the '63 team played host to Pennsbury and decided to make it as exciting as possible. In fact, the games of 1963 through 1965 were as good as they could get as the template was well in place for what has proven to be an enduring and important series over the years. And interestingly, although the two neighborhood rivals had been playing since 1930, those early '60s brawls were not yet the automatic, season-ending game that it would eventually come to be. Actually, through the 1950s the Falcons had been slotted as one of the early games each year for the 'Skins. It was only Neshaminy's entry into the East Penn League in 1963 − which later became the Big 6, Big 7 and then Big 8 − that caused scheduling problems and the need to move the Pennsbury game to the back-end of the season. But leaving that aside for the moment, the 1963 contest saw the 'Skins down 20-14 late in the fourth quarter after squandering an early 14-0 lead. With the clock running out in the final session, and after looking across Playwicki Field as calmly as he could, legendary Head Coach John Petercuskie called on his seasoned troops to bring it home − and that's just what they did. 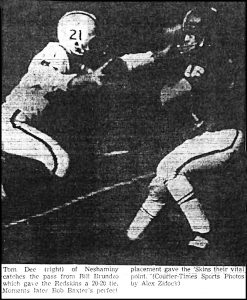 The underdog Falcons came within several yards last night of doing what no one else has been able to do all season long, send the Redskins down to defeat. But time ran out and Neshaminy squeaked through to a 21-20 win before a full house at Playwicki Field.

The wild contest ended with Pennsbury attempting a last second pass from the Neshaminy seven-yard stripe after driving from their own 24-yard line in 14 plays that included four first downs.

With the exception of the first half of the opening period, the Falcons dominated the game as they bottled up the vaunted Redskin attack. The statistics showed Pennsbury with 23 first downs and 337 yards of offense as against Neshaminy’s 9 first downs and 132 yards gained.

The contest began as most local “experts” had expected with Neshaminy scoring two quick touchdowns. The first came in the first minute and a half of the game when Bill Brundzo raced 37 yards to paydirt two plays after the opening kickoff. Bob Baxter kicked the extra point.

Pennsbury took the Redskins kickoff but could go no where and had to kick on fourth down. A poor punt gave Neshaminy the pigskin on the visitors’ 21 yard line. In five plays they moved to the two from where Baxter plunged for another six points. He then booted the PAT and the Redskins were in front, 14-0. With the action going according to the script, the fans sat back to see how high the hosts would run up the score against their guests. 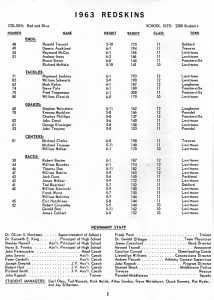 But nobody had bothered to show the script to the Falcons. Following the kickoff after Baxter’s TD, they began a series of movements from their own 25-yard line. In 17 plays, that ran into the second quarter, the Redskins drove to the Redskins one where quarterback Vince Tanzola dove for the score. Bob Burkhart ran for the extra point.

The Falcons defensive line showed its prowess in the next series of plays after the Redskins took the kickoff and returned it to their own 48. Three tries at the line by Baxter failed to gain the necessary yardage and Neshaminy was forced to punt. 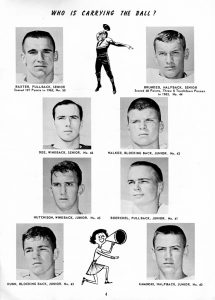 Once again the Falcons started from their 25 yard line. With Burkhart doing most of the carrying they moved the ball to the Neshaminy seven. With ten seconds remaining in the first half, Burkhart drove the last seven yards to give the Falcons 13 points. His successful run for the extra point knotted the score at 14-14 where it stood at intermission.

Pennsbury received the kickoff to open the second half and began another drive to a TD. With Burkhart doing the major portion of the work they moved from their 33 to the Neshaminy 25. Here they were faced with a fourth down − two to go situation.

Tanzola gambled to stay with the ball and it worked as Burkhart dove for the first down. The Pennsbury march continued until the Redskin 12 where the Falcons where again faced with a fourth down − two to go situation. This time a pass failed and Neshaminy took possession.

The Pennsbury defense stiffened again and when three attempts by the Redskins were throttled the Redskins punted giving Pennsbury the ball on their own 35 yard stripe.

With their fans pleading for another score, the Falcons threw the offense into high gear. They moved from their 35 yard line to the Neshaminy 44 as the period ended.

The drive continued as the game moved into the final period. A 39-yard pass play from Tanzola to Bill House put Pennsbury on the Neshaminy three-yard line. Burkhart, trying for the TD, wasted no time moving the ball to the two. Tanzola then scored his second marker of the night on a keeper. This time Burkhart’s attempted PAT run fell inches short.

Now it was time for the Redskins to get into the scoring act again. Taking the kickoff on their 42, they began to move forward on line “bucks” by Brundzo and Baxter. They carried the ball to the Pennsbury 27-yard stripe.

Here Redskin coach John Petercuskie went to track star Tommy Dee. The speedy senior outraced the Falcon pass defender to the end zone where he grabbed Brundzo’s aerial for the TD that knotted the score at 20-20. Baxter then kicked the extra point that was to prove to be the margin of victory.

Still sensing an upset, the Falcons began their last drive of the evening following the kickoff. It was ill-fated, however, and was destined to fall short on the Neshaminy 30-yard stripe as the clock ran out.

The victory gives Neshaminy another in a long line of Lower Bucks County League crowns, this time in Section One. The game was also the last of the season for the Redskins who finish 9-0-1.

Pennsbury can be proud of the job its defensive line did on Neshaminy’s Bob Baxter, the highest scorer in Lower Bucks history. The Falcons held the Redskin fullback to 23 yards in 15 carries, the lowest output of his career. The stalwart Falcon defenders, including Doug Guertin, Les Hoffman, Ken Medlin, Al Dunning, Bob Peresta, Joe Fioravanti, Steve Buttershell, and Mike Homa, allowed the league champs only 33 yards on the ground in the least three periods. 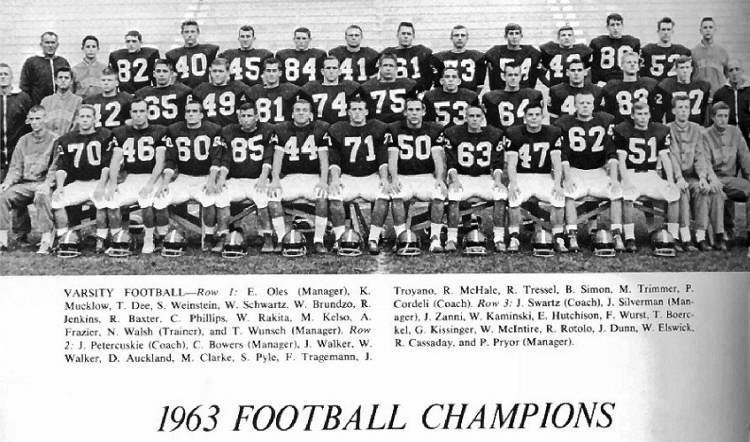 Editor’s Note: Yes, even though the fans didn’t yet know it, the 1963 game was a harbinger of things to come as Neshaminy and Pennsbury would go to the wire in ’64 and ’65 too with a 14-13 Neshaminy win in 1964 followed by the thrilling 7-0 ‘Skins victory in 1965. And by that last tussle of ’65, there was no doubt that all of Bucks County, Southeastern PA and the state knew it too − the annual bout between the Falcons and the Redskins was something not to be missed. Plus with football seemingly the primary focus of the good people of Lower Bucks, it had become obvious that the game between these two schools was the “one” that really captured their attention. With the 1963 barnburner lighting the fuse, ‘Skins greats on the field that day included Bob Baxter, Bill Brundzo, Jack Dunn, Steve Pyle, Mike Clark, Billy Kaminski, William Walker, Rich McHale, Tommy Dee, Fred Tragemann, Bill Schwartz, Ted Boerckel, Keenan Mucklow, Eric Hutchison, Ray Jenkins, Gerry Barr, Jimmy Colbert and a host of others. And now with the ‘Skins-Falcons game continuing unabated into the 21st century, the monumental glow that results when these grid giants meet lights up the landscape for miles in all directions.