They had their backs to the wall Friday for the second straight District One Class AAAA playoff game. Their situation – down 17 points to the district’s top-seeded team in the third quarter in a very hostile environment – seemed even bleaker than the week before.

But they made an even more improbable comeback this time, rallying in the game’s final period to upend host Coatesville, 23-20. They turned Multi-Purpose Stadium into a sort of Homecoming dance, with Neshaminy students rushing the muddy field as the final seconds ticked away to cavort with the ecstatic players.

“I’m not shocked,” senior running back George Coleman said of the victory, which earns the Redskins (11-1) a spot in the district title game Friday at home against defending state champion North Penn.

Continued Coleman: “I knew we had it in us.”

Coleman knew, he said, because he’d seen it before.

Neshaminy erased a three-point deficit last week to become just the second visiting team ever to beat CB West at War Memorial Field in a playoff game, 38-34. The Redskins emerged from a 16-0 hole to take North Penn to overtime during their lone regular-season loss, ultimately losing, 31-30.

So even when Coatesville dominated Friday’s first half, then built a 20-3 lead early in the third quarter…

“We were confident we could come back,” defensive lineman Chris Daino said. “We just bowed our necks and made plays happen.”

Quarterback Andrew Flogel threw second-half touchdown passes to Jason Kinney and Coleman to bring Neshaminy within 20-16 with 8:29 left to play in the game. That was promising. But a failed two-point conversion on the second score seemed to put the Redskins’ comeback hopes on thin ice.

“I didn’t want to go overtime,” Neshaminy coach Mark Schmidt said of his decision to go for two.

Then Jarred Kinney forced a Coatesville fumble, and Daino recovered at the Coatesville 45. Two minutes later, Dominic Cundari ran in the go-ahead touchdown.

Another forced fumble – this time by Kevin Staub – and another recovery by Daino, helped to seal the win.

“Our defense is something special,” Coleman said. “We always knew that. They keep coming out time and time again and proving what they are. A good defense.”

Neshaminy didn’t look great on either side of the ball in the first half. The Redskins could eke out just 80 total yards in the first half, compared to Coatesville’s 175. They committed two second-quarter turnovers and fell into a 13-3 hole at the half, only their second double-digit halftime deficit of the season.

Coatesville running back C.J. Gray broke a 45-yard touchdown run with 2:11 left in the first half to break open the game. Soon after, Coatesville capitalized on Flogel’s second interception of the night – and just his third of the season – to kick its second field goal and take the 10-point advantage.

“The team scared me,” admitted co-captain Andy Marino. “We were dragging butt in the first half, even into the fourth quarter. I had my doubts.”

“You always have your doubts,” Coleman, the team’s other captain, said. “But it helps you fight through. It makes you persevere more. It makes you want it more than ever.”

That basically sums up Neshaminy’s attitude toward North Penn, its next opponent.

“We are so hyped for this game,” Daino said. “We want revenge big time.”

COATESVILLE - Neshaminy coach Mark Schmidt didn't ask a lot from sophomore quarterback Andrew Flogel this season. The Redskins won most of their games with a dynamic running attack and a stingy defense. Flogel made some very nice plays during the regular season. Going into Friday night's District One Class AAAA semifinal game against Coatesville, he had 735 passing yards in 11 games, completed 56.5 percent of his passes and threw for 10 touchdowns and only one interception. At the same time, he'd never really been expected to carry the team.

Against the Red Raiders and their tough run defense, Schmidt finally asked. And after a rough first half, Flogel responded.

Over the final 19:10 Flogel completed four of six pass attempts for 98 yards and two scores. Not bad for a kid who only averaged 8.4 pass attempts and 66.8 passing yards a game before Friday night.

In the first half, he looked like a sophomore for one of the first times all year. He threw more interceptions in the second quarter (two) than he'd thrown in the previous 45 quarters combined.

"I knew we were going to have to throw the ball against their defense," Flogel said. "[In the first half] we weren't playing well. We weren't moving the ball. I wasn't reading the defense right. My head wasn't strong."

Both interceptions led to Coatesville field goals, and the second one put the Red Raiders up by 10, 13-3, at the end of the first half. Before Flogel even got on the field in the third quarter, Coatesville scored again to go up 17, 20-3.

"We had to do something quick, and it had to be good," Flogel said.

With about 41/2 minutes left in the third quarter, Flogel completed his first pass of the second half to junior Doug Rosnick for 14 yards and a first down. Five plays later, he hit Rosnick for 13 yards on fourth-and-eight from the Red Raiders' 41. Two plays after that, Flogel hooked up with junior receiver Jason Kinney for a 29-yard touchdown on a third-and-11 play, and the comeback was on.

"We had to score quick, and we did," Flogel said. "That helped us a lot. It got us some momentum."

On Neshaminy's next possession, Flogel hit George Coleman for 16 yards on third-and-seven at the Redskins' 36. Four plays later, Coleman darted down the middle, and Flogel put the ball right in his hands for a 26-yard touchdown to make it 20-16.

"On that second one, I knew George would go after it," Flogel said. "I think that one shook [Coatesville] up a little."

Neshaminy covered the 45 yards on its final drive with seven straight runs. On the sixth play, Flogel ran for 10 yards to get the ball inside the 1-yard line and set up Dominic Cundari's game-winning TD.

"I thought I was in," Flogel said.

"Andrew struggled early. He was a little tense," Schmidt said. "But hey, how many big plays did he make in the second half? [At halftime] we just told him to settle down. He's our guy." 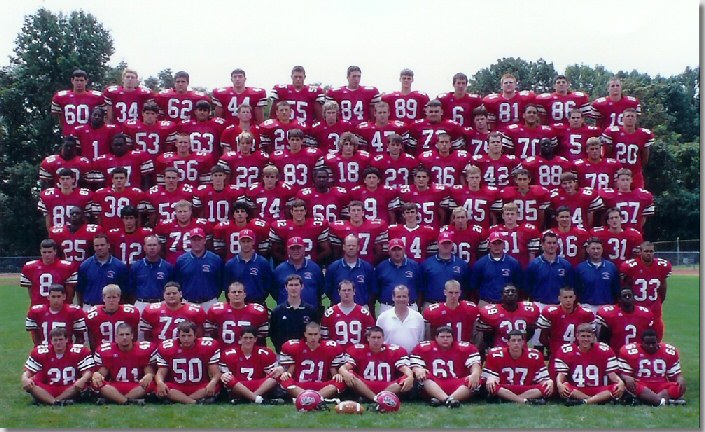