September 13, 1963. Neshaminy lines up at home against a fast rising Bishop Egan Eagles team that is now in just its fourth season under head coach Dick Bedesem. Meanwhile, and establishing a pattern for the year, the 'Skins appeared less than sharp during the first half of the game. Predictably, in the face of such a determined team, the Tribe broke for the half and headed for the locker room underwater, 13-0.

Would Petercuskie and his staff turn the boys around for the final two sessions or was "The Streak" to end well before its time at the hands of the Philadelphia Catholic League upstarts?

Powerful Neshaminy High School’s football team had to rally for two touchdowns and two important extra points in the second half to eke out a thrilling 14-13 victory over classy and upset-minded Bishop Egan High before nearly 11,000 Lower Bucks grid fans last night at Playwicki Field

It was the season opener for the Dick Bedesem coached Eagles and marked the second straight cliff-hanger for coach John Petercuskie and his Redskins who got past Central Dauphin, 7-0 last week. The victory was the fourth in four tilts for Neshaminy against up-and-coming Egan and the closest in the series which started in 1960.

Bishop Egan dominated the entire picture during the first half in pushing across two touchdowns. Coach Bedesem’s squad found the best way to hold the Redskins was to keep the ball from them. The manner in which the Egans took charge stunned the packed stadium. 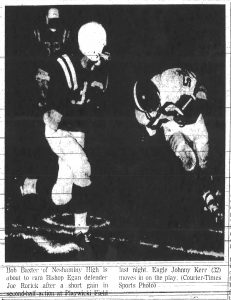 Neshaminy had the ball just for three series of plays in the first two quarters, giving up the ball once by punting and losing it twice on intercepted passes. A half dozen running plays netted the Redskins just a mere 11 yards and a single first down, that with the aid of a five-yard penalty.

Meanwhile Bishop Egan rolled up 12 first downs in the opening half as they scored two TD’s over the bewildered home club. The Eagles totaled 147 yards on the ground in working goalward plus another 17 yards on four short but cleverly completed passes. There just wasn’t any stopping the invaders up to the halftime mark.

The initial score came exactly in the middle of the first quarter after Bishop Egan took the kickoff. The first play was from the 31-yard line and in six minutes, using 15 plays, the 69 yards were negotiated to pay dirt. The longest was an 11-yard jaunt by Joe Rorick and a completed pass from Bill Creeden to John Kerr for 12 yards.

Five first downs were registered in the march which was completed with Rorick plunging over from the two. A pass added the seventh point, with Creeden tossing to Colella in the end zone.

In the second quarter Egan took over again after Neshaminy punted from its five to the 45. This time it took 13 plays to make it 13-0 with Colella breaking through from the one with less than three minutes to go. A plunge attempt by Rorick failed to get the extra point.

The second half was a reversal of the opening two periods as Neshaminy came to life from the start and with a poor punt by Egan putting the Eagles in a hole early, the Redskins were not to be denied for the balance of the tilt.

Neshaminy came back with nine first downs while giving up but two. The Redskins rolled up 101 yards on the ground in the last two periods and held Egan to 29.

The first play after they took the kickoff in the third quarter got them 17 yards as Bill Brundzo started the fireworks. A short time later the Redskins were forced to punt when Leo Rossi tackled Brundzo for an 11-yard loss. In the first series for Egan it was fourth and two when John Taylor punted for the Eagles, the kick traveled just 15 yards past the scrimmage line and set the pigskin on the Egan 36.

The Neshaminy spark was relighted here and it used eight plays to score with Baxter’s three-yard run notching the TD. Baxter’s placekick made it 13-7. 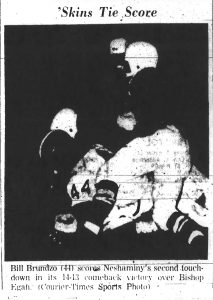 On the ensuing kickoff, Egan got its two first downs of the second half here by working the ball to the Neshaminy 44. Brundzo intercepted a pass and almost got away but Rorick managed to get him in the clear just two yards past midfield. The Redskins had time for just one play as the quarter ended with the goal 45 yards away.

It took Neshaminy less than five minutes to tally the needed touchdown in the last quarter. A dozen plays set up the TD, with Brundzo going across from the one-yard stripe to knot the count, then Baxter’s placement put Petercuskie’s team in front 14-13.

Egan took the kickoff to its 33 and with fourth and four at the 39 a pass failed to click and the ball was lost with only two minutes remaining. The Redskins notched two yard-stick movers but finally lost the oval on the Egan 16 on downs as 30 seconds remained.

The Eagles had time for only one play and tried to hurl the “big bomb” but the double pass from Creeden to Kerr to Colella only gained four yards as time ran out before another play could be tried.

Rossi, a junior end, played an outstanding game on both defense and offense for Egan. Tackles Dennis Woomer and Dave Fredericks, as well as guard Bruce Gerrity, did yeoman work in the line for the Eagles. The former is a junior the other two are seniors. A pair of juniors, tackle Fred Tragemann and center Mike Clarke, were standouts in the Redskin front line.

The 13 points were not enough for the Eagles on this Friday the 13th. But the day should be remembered a long time by the Egan squad which worked so hard to pull an upset and deserved a better fate. Neshaminy should also be content by its splendid fight to a close victory. 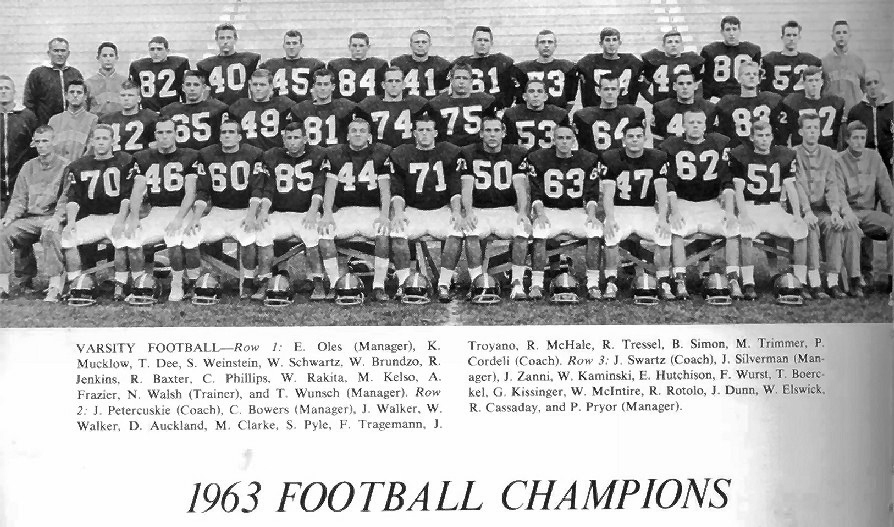 Editor’s Note: Reloading after graduation took many talented starters, while also following in the footsteps of Petercuskie’s powerful squads of 1960, 1961 and 1962 which had tasted defeat just once during those years, the 1963 Redskins would make a habit of going to the wire week after week. In fact, three of its wins were by just one point while another three were by a touchdown or less. And for good measure, one other game ended as it had started, 0 to 0. But when the dust had cleared the “numbers” told the story as the season came in at 9-0-1. Remembered as the team that wouldn’t quit, the 1963 club posted the second of four straight campaigns without a loss in addition to serving as the keystone of the half-decade long, 51 game unbeaten “Streak” still celebrated to this day.