October 11, 1968. It's a track meet! And no matter what the 'Skins do, the Dieruff Huskies manage to match their effort. Sprinting for the finish line from the opening kickoff, the Indian Nation sees its 20-13 halftime lead widen to 34-19 before dwindling to a two point margin late in the fracas. Then to make matters worse, rather than salt away the contest away by earning just one more first down to kill the clock, the Moleskinners punt with under a minute to go. Dieruff's deep man? Ross Moore, their all-purpose, All-State quarterback. Snagging the ball and tucking it safely away, Moore throws a few moves and manages to slip into the open field with visions of his name in lights.

Some 7,500 spectators rose to their feet with 35 second remaining as Neshaminy, ahead 34-32 in the Big Six tilt, was forced to punt.

Huskie quarterback Ross Moore received the punt on his 13. He appeared trapped, but eluded several Redskins who had gotten downfield quickly and broke into the clear.

Moore darted down the left side lines and cut across the field.

Walker stood between the ball carrier and pay dirt.

Walker took a solid shot at the fleet Moore and slowed him up long enough for Jack Dunkley to drive him out of bounds.

“I didn’t know if I was going to get him” Walker said after the game. “He gave me a hard straight-arm in the head.”

Sparked by the running of Steve Sroba, who all told scored four touchdowns and gained 159 yards, the Redskins took a 20-13 halftime advantage.

The powerful ground game of Neshaminy was nearly matched by the passing dexterity of Moore, who brought the Huskies back from a 34-19 deficit in the fourth quarter to within two points of victory. Moore hit on 18 of 30 tosses for 234 yards.

The Redskins blocking was vicious inside, as a jubilant John Swartz pointed out.

“We used the unbalanced line for the first time,” Swartz said. “And they (Dieruff) weren’t ready for it.” Swartz cited guard Ed Worthington for an outstanding offensive effort.

Neshaminy’s 232 yards rushing were impressive, but it took a soccer style player to ice the game.

Chris Bahr kicked three of his team’s four extra points. Bahr is on the Redskin soccer team and doesn’t work out on the gridiron.

Asked why Bahr was not called on to kick after the Redskins’ first score, Swartz said “Romanowski (Ed) kicked 19 straight in practice.” Romanowski failed on his attempt.

Neshaminy scored first when Sroba smashed over from the five to cap a 56-yard drive on the opening series.

Sroba tallied twice in the second quarter on runs of one and 15 yards. After his 15-yard success, quick-thinking quarterback Doug Mason salvaged an extra point when he ran it over after a high pass from center. He had been preparing to hold for Bahr. 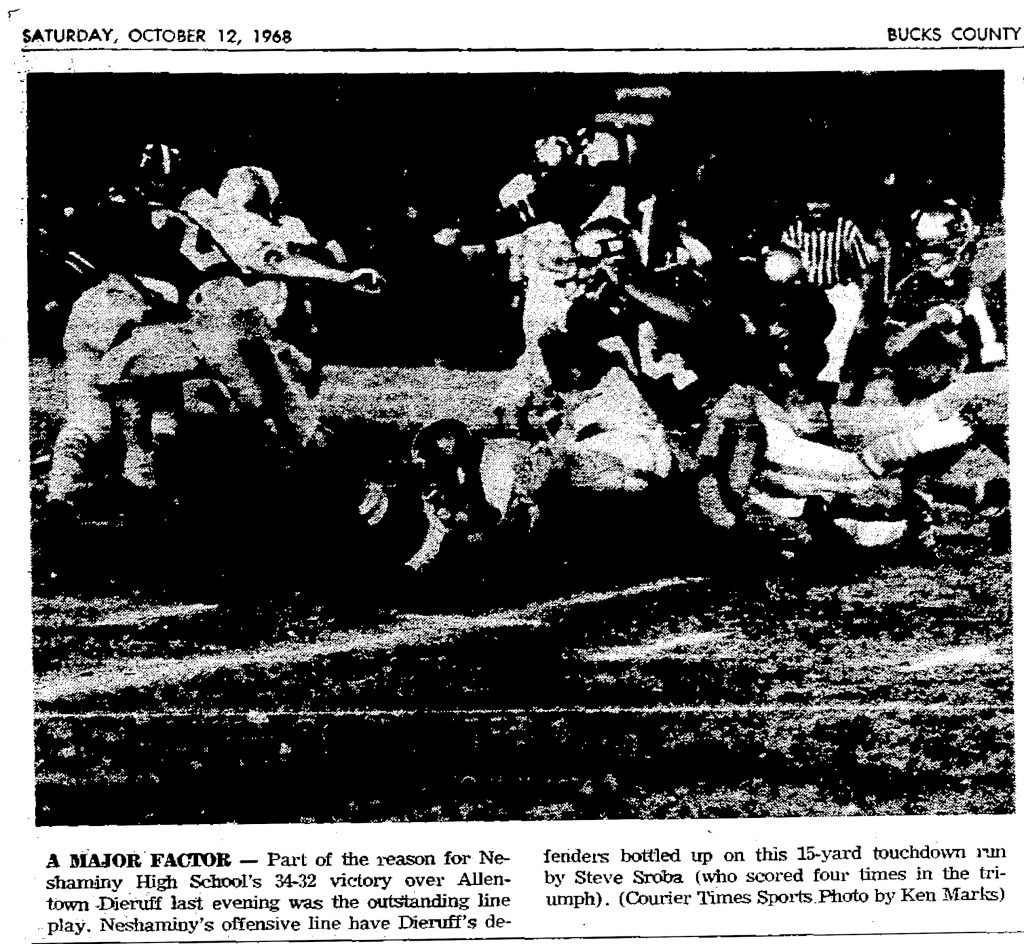 Moore found Bill Alli in the end zone with 57 seconds left in the half.

Moore circled right end for five yards and his team was down 20-19.

Redskin back Jim Ryder scored from the five and in the final period Sroba tallied his fourth six-pointer with a two-yard thrust.

Dieruff fought back as Moore threw an eight-yard touchdown pass to Joseph and with two minutes remaining, Frank Pagnano went over from the one.

Joseph kicked an extra point and Moore ran one over for the Huskies. The other three were blocked. 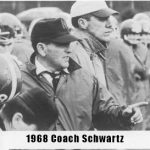 Editor’s Note: Jack Swartz’ first year at the helm sees him take charge in a big way. Relying on a tough as nails senior class − supplemented by a talented group of underclassmen − the 1968 ‘Skins got back to the winning side of the ledger as they finished 7 and 4. Scrappy, tough, wiry and smart, the ’68ers found ways to win. Not always pretty, not always shiny, not always a Kodak moment, they earned their victories. And the Dieruff victory was classic 1968. Highlighted by a punishing ground game − featuring Steve Sroba – and a defense that bent over backwards but didn’t break when it counted, they did what was necessary. Also helping the Redskins post a winning record that year were Doug Mason, Jim Riley, Dennis Armour, Jack Dunkley, Jim Ryder, Mark Spadaccino, Mark Mattingly, Dale Edwards, Tim Michael, Pete Markman, Ed Worthington, Phil Kulan, Scott Hough, Joe Caracappa, Don Kaminski, John Diegel, Frank Scott, Chris Bahr, Bob Lustica, Ed Romanowski and others.