Friday, November 19, 1954. The Redskins are in Pleasantville, NJ playing the framing-nail tough Pleasantville Greyhounds. Bringing their 8-0 record with them - and winner of 26 out of their previous 27 contests - the fourth quarter opened with the 'Skins on the wrong end of a 6 to 0 score. With an offense that had generated just a little over 100 yards and six first downs in the first three quarters (while star QB Errol Faunce was grabbing some pine on the bench due to an injury) things looked bad. . .

Cast in the role of the underdog, Neshaminy was stopped cold until its power exploded in the finale. The 14-point margin of victory does not reveal the closeness of the game as the Redskins winning streak was in peril from the opening whistle.

Things looked very dark for the Neshaminy team as the last quarter started with Pleasantville holding a 6-0 lead, the result of a second period touchdown.

Sitting on the bench was Errol Faunce whose famed passing arm was responsible for many of the Neshaminy touchdowns this season. Faunce was hit in the face, lost a tooth and suffered a cut on the inside of his lip in the third quarter. 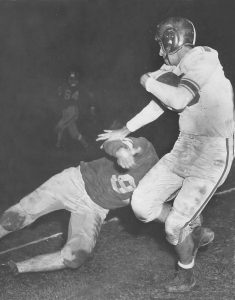 Don Cameron Courtesy of his daughter

Don Cameron could not get away for any of his long scampers and Joe Moronese had difficulty prying his way through the heavy Pleasantville line, especially with end Ronnie Lupton breaking through to stop most of the plays before they could get started.

In the fourth it appeared lost as Pleasantville drove to the 10 yard line before the rugged Redskins finally held on at the seven with a gallant goal line stand.

Then came the straw which broke the Pleasantville team’s back. After Neshaminy moved to the 35, Don Cameron went back to pass. It was supposed to be an aerial to the left side but Alhum could not get away and Cameron suddenly found himself trapped at the thirty.

He let go the ball with his southpaw hand straight to Joe Moronese who caught it on the Pleasantville 40 and broke away for pay dirt. Three players had a chance to catch Moronese or push him out of bounds but the chunky little fullback eluded them to tie the score. He then booted the conversion point to give his team the lead, 7-6.

After that it was a disheartened Pleasantville team that lined up for the kickoff and before it was over another pass was good for another touchdown and Frankie Ferguson blocked his second kick of the game to pave the way for the third six-pointer.

Ned Moyer was on the receiving end of the pass play which scored the touchdown while Moronese added his second touchdown following the blocked kick.

The Pleasantville TD was made by Richie Fonaro following a pass interception near the close of the first half.

The fog that enveloped Ansley’s field seemed to reach the Neshaminy players for in the first three quarters they were only a shell of their former selves.

Only seventy-five yards were chalked up on the ground before the team came to life and in the last period 34 yards went on the score sheet. Coach Harry Franks’ team completed four out of six passes in the last quarter but was successful only on three of its 16 tries in the other part of the game with four being intercepted.

Things were at their darkest in the second quarter when after losing the ball at the start, the Neshaminy boys only regained possession once and that was on a blocked kick by Ferguson. They failed to capitalize on the break as the four downs showed a net loss of two yards.

Cameron brought the fans to their feet the first time he carried the ball at the start of the game when he got loose and went 68 yards for a touchdown only to have the ball brought back to the 50 where he stepped out of bounds. The run came on Neshaminy’s pet play where the team lines up way to the right of the ball.

That was the only score until late in the second when the Jerseyites took the 6-0 lead.

Pleasantville’s Tom Forman intercepted a pass and would have gone all the way but Bob Hurst came from behind to spill him to the earth on the seven. Charlie Evans and Mike Linder hauled the ball to the one from where Fonaro took it over on a handoff from Linder.

That’s the way it was until Neshaminy shook off the doldrums. Stan Wilt, who relieved the injured Faunce, had a big hand in the first TD drive. He passed to Cameron for six yards and then ripped off nine on an end run. He followed by tossing to Moronese to set the stage for the touchdown pass which changed the entire complex of the foray. 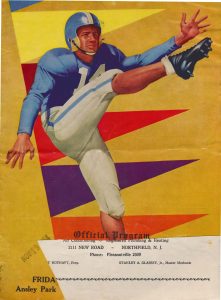 Moronese and Wilt made 16 yards on three line plays before Cameron passed to Moyer. The latter caught the ball on the five and went over for the score for a 29 yard completion. Moronese missed the PAT.

The third touchdown also came in fast order. Following the kickoff which was carried from the nine to the 20, Pleasantville tried three passes which were grounded.

Adams went back to kick but Ferguson broke through and made a nice block. The ball rolled back to the one where it was recovered by Neshaminy. On the first play Moronese took it over for the TD. He passed to Stan Covington for the conversion point.

Neshaminy has its annual Thanksgiving Day classic with Bensalem remaining on its schedule. The situation now is as it was last season with Neshaminy being unbeaten until Bensalem scored its 7-6 upset win and tie for the Lower Bucks County Crown. 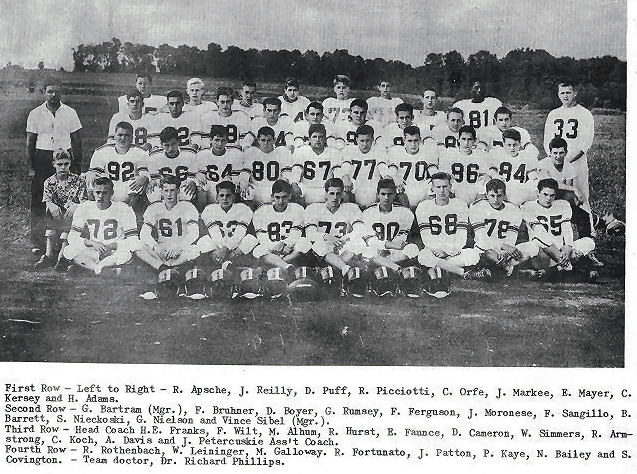 (Editor’s Note: The following week Neshaminy crushed Bensalem 53-6 to finish a perfect 1954 campaign with an unbeaten and untied record of 10-0-0. And in a sign of those faraway times, the Pleasantville game had originally been slotted for September of that year; however, because of a polio outbreak the school was shut down and the Neshaminy team and its fans did not know the game was cancelled until they arrived at the deserted campus.)