Friday, November 19, 1999. Although hard to believe, the 'Skins had not beaten the Falcons in Fairless Hills since 1964. So as they headed over to Falcon Field in 1999 for the annual battle, the Blue and Red were lugging not only their 7-2 record with them but something else as well. In fact, Head Coach Mark Schmidt, then in his 5th year as the Tribe's Field General, ordered that some of the hallowed ground of Heartbreak Ridge be carried along for the ride. The thought was that while "The Drought" had been going on for one too many years at Falcon Field, the same could not be said about the games played in Langhorne. Thus, several plastic five gallon buckets were filled with dirt and sod from the Ridge and secretly sprinkled on Pennsbury's field by the Redskin players as they warmed up.

With the playing surface appropriately prepared, the proof would be in the pudding as the opening whistle called the two archrivals to play. 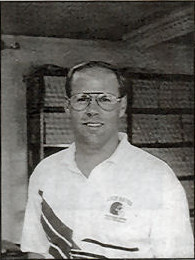 Fairless Hills– Neshaminy football coach Mark Schmidt stood outside the Pennsbury high school fieldhouse across from the football field late yesterday afternoon and thought back to the way he felt standing in the exact spot two years ago.

“About as low as I ever felt,” Schmidt said.

His emotions were decidedly different yesterday.

The Redskins, faced with the burden of erasing 35 years of frustration, responded with one of their strongest defensive games of the season in a 17-14 victory over archrival Pennsbury at Falcon Field.

It was Neshaminy’s first win at Pennsbury since 1964 and the first time the Redskins had ever won at Falcon Field.

That year host Pennsbury stunned Neshaminy, 9-6, with a late touchdown drive in the pouring rain. The Falcons won another wild one at Neshaminy last year, 38-31, in triple overtime.

When Pennsbury marched 78 yards on the opening drive of the game yesterday and scored on Patrick Wells’ 9-yard touchdown pass to Will Applegate, the Falcons had to be feeling good about their chances of extending their win streak against the ‘Skins.

Neshaminy had other ideas. The Redskins made life miserable for Wells the rest of the game, sacking him nine times. Bernatowicz (two), Jason Delp (1.5), and John Krauth (1.5) led the sack attack.

“We knew we had to put pressure on him or he’d tear our secondary apart,” Bernatowicz said.

Neshaminy (8-2, 7-2 SOL National) got on the scoreboard on a 20-yard field goal by Rob Fryer early in the second quarter, but the Redskin offense didn’t really get untracked until the second half. 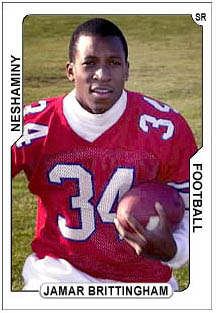 On Neshaminy’s first series after halftime, sophomore Jamar Brittingham carried eight times for 33 yards, setting up a 13-yard Chris Vincent touchdown run that gave the ‘Skins the lead for good. Vincent, who had 97 yards for the game, added an 11-yard run that gave Neshaminy a 17-7 lead with 4:47 remaining in the game.

“The first half we were pretty shaky,” Vincent said. “We had a little pep talk before the second half and went to work.”

Quarterback Kamal Woodosn helped set up the clinching touchdown with a 12-yard completion to Ryan Gallagher on third-and-8.

To their credit, the Falcons (5-5, 4-5) didn’t quit after falling behind by 10. Wells shook off the constant beatings, completing a couple of passes to Evan DiBlassio and sprinting for two first-down runs before scoring on a 1-yard sneak with 46 seconds remaining. But Neshaminy clinched the game when Bill Crompton cleanly fielded E. J. Cochrane’s onsides kick.

“He took a lot of shots but he came back and made plays,” Pennsbury coach Mike Elko said of Wells. “I’m proud of the way he came back under intense pressure.”

Elko, whose team started as many as eight underclassmen on defense at times this year, believes the Pennsbury program is headed in the right direction.

“We definitely made improvement as a team and as a program,” he said. “But we don’t want to think of ourselves as a middle-of-the-pack team. A 5-6 record can never be good enough at Pennsbury.”

The Redskins, meanwhile, had plenty of reasons to celebrate. Their eight wins were the most at the school since 1988 and it came on the heels of a 3-7 finish last year.

“No one expected much from us this year,” Bernatowicz said. “We busted our butts all summer and came out and surprised the heck out of everyone.” 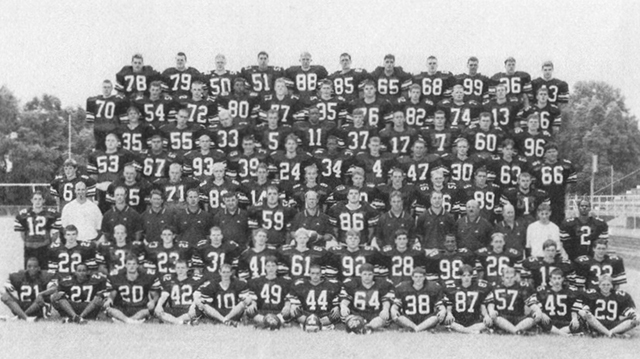 Editor’s Note: Beside coming to be known as the “Dirt Game”, that contest at Falcon Field also put the ribbon around a 1999 season that came in at 8-2 with losses only to Central Bucks West and North Penn who were ranked #1 and #2 in the state that season. And with Coach Schmidt then closing out his fifth year at the helm, it was also obvious the ‘Skins were on the right track. Meanwhile, “The Drought” at Fairless Hills had also been broken with the win as well. A talented club, the ’99ers included players like Mr. Redskin Joe Mitskas along with John Knauth, Kamal Woodson, Joe Szymanek, Brian Schaubhut, Gary Cianni, Joe Fonde, Bill Crompton, Tim Krusen, Ryan Gallagher, Steve Bejzak, Sherman Brittingham, Nick Farnsworth, Nick Feszko, Jason Delp, Joe Bernatowicz, Mike Knapp, Rob Fryer, Chris Vincent and a host of others. Plus one special sophomore player who was seeing plenty of time that year was Jamar Brittingham. Redskin fans would become very familiar with him over the following two seasons as he set many rushing records during the campaigns of 2000 and 2001 − his junior and senior years − while also helping the Tribe earn the 4A State Championship in his final season too.