Saturday, November 15, 1975. Council Rock. The Rock. The Indians. It doesn't get much better as the Newtown based school had not only served as the Redskins first opponent way back in 1928, but they had been on the schedule since that start to Langhorne's football program. Although known as the Indians today, back in the "day" they were the Iron Horsemen and under the direction of head coach Walt Snyder in the '70s, they were tough as the steel rails a train runs on. Especially in 1975 when Neshaminy was in the hunt for an LBC flag after a three year dry spell. With Coach Pal Allison at the helm, and with a team that was snagging wins on the arm strength of quarterback Terry Gallagher; the All-State hands of receiver Eli Weissman; the powerful legs of running back Jamie Meier; the foot of kicker Jeff Ratner and the raw football skill of that season's Mr. Redskin, Steve Shull, the battle lines were drawn for the two schools as clearly as the hash marks on the field. With the stage thus set, the Redskins and Indians were both on the warpath. But it looked as if the Indians were a bit more fired up as the teams broke for the half with Council Rock in front, 13-0. Would the 'Skins come back in the second or were the Indians taking the prize back to Newtown?

LANGHORNE − On the slate board in the locker room of the Neshaminy Redskin football team was a message which read:

“We are nearing the mountain top − a large rock is in our path − will we go on?”

Neshaminy will go on.

The Redskins fought from behind to climb past Council Rock yesterday, 14-13, to assure themselves of no less than a share of the Lower Bucks County League Section One title.

“We’re in a very comfortable position now,” said Neshaminy coach Pal Allison, who was far from relaxed during the first half of yesterday’s game.

The Redskins could do nothing right in the first two periods and visiting Council Rock took advantage of their mistakes to hold a 13-0 halftime lead.

The Neshaminy defense, which was on the field for most of the first period and survived three turnovers by the offense, finally cracked in the second quarter.

“We coughed it up three times in the first period and got away with it,” said Allison, “but I had to holler at the defenses after that second period.” 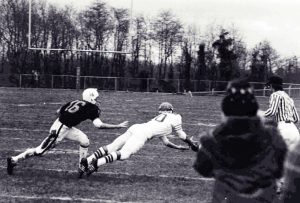 “When a quarterback can roll out on you and go 25 yards on you somebody’s messing up.”

Actually Council Rock quarterback Dan Huf ran a bootleg 12 yards around the left side for the touchdown and the Indians went up 7-0 when Brian Adams added the extra point.

The Indians boosted their advantage to 13-0 when Huf found senior tight end John Rennie all alone with a 45-yard touchdown pass.

“It bothered me that no one was even near him,” said Allison.

Council Rock’s attempt for the point after touchdown was way wide and short, however, and that would bother the Indians a whole lot more.

That was because Neshaminy was to come back to control the second half and pull out the victory by that single point.

“We were firing off quicker,” said Jamie Meier, who was the game’s leading rusher and scored the winning touchdown.

“In the second half I noticed their 76 (Greg Pritchard) was blitzing. (Rick) Rynkiewicz was handling him and that’s why we could control the ball. I was just moving up one step and then going for the sweep.” 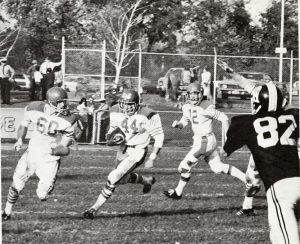 Meier, who managed just 13 yards in the first half, swept around the right side for 68 yards in the second two periods.

Meier knotted the score at 13-13 when he followed the blocks by Phil Ivins and Tony Petsis four yards into the endzone with 9:37 left to play.

Jeff Ratner then boomed through the extra point which decided the game.

Ratner went into kick after Eli Weissman got Neshaminy back into the game by hauling in a Terry Gallagher aerial which was good for a 75-yard pass-and-run touchdown.

“I was shocked when I went in there because (Steve) O’Brien was holding,” said Ratner. “Instead of concentrating I was thinking about the holder.”

“He came over and asked me what happened to Terry (Gallagher), the usual holder,” said Allison, “I told him you don’t kick Terry, you kick the ball. It’s just a good thing that the official was awake on the first one.”

One of the Council Rock players jumped offsides and that gave Ratner another chance.

“When he started to come early I think he rattled Jeff and was partly the reason for the bad kick,” said Allison.

Ratner made the second kick good, however, and Neshaminy was within six points, 13-7, with 1:47 left in the third period.

Both of the Neshaminy touchdowns began with pass interceptions.

Bob Hayes picked off a Huf pass intended for Cary Whitacker before the first Redskin score and O’Brien stole a pass meant for Rennie prior to the six-play drive leading to Meier’s touchdown.

In both cases Huf elected to throw on second down, a move which surprised Allison.

“At halftime we were thinking if we had a 13-0 lead what would we do,” said Allison. “We figured they’d come right at us.”

“I was surprised they threw. Maybe they didn’t want to change their approach because it was working well in the first half.”

Neshaminy is now 4-0 in the LBCL Section One standings and can win its first championship since 1971 if it beats Pennsbury (3-1) next weekend. 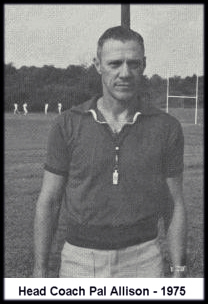 Editor’s Note: Under the direction of field general, Paris “Pal” Allison, the ‘Skins put together a 7-4 club in that season of 1975 as they shared the LBCL Section One flag with Pennsbury − the 19th outright or co-championship crown over a 30 year period dating to the 1946 club that brought the first LBC title to the Blue and Red. Fittingly too as Coach Allison had been part of the program during 21 of those years, first signing on in 1954 under the great Harry Franks. And in addition to Coach Allison’s firm and seasoned hand on the sidelines, the Redskins also enjoyed the services of All-State receiver Eli Weissman who had terrorized opponents with his speed and circus grabs all year long. Quarterback Terry Gallagher had also been an excellent signal caller, leader and thrower and had enjoyed not only passing to Weissman but handing the ball to super running back Jamie Meier who had lead the ‘Skins ground attack in 1975. And beside those three, the Tribe also enjoyed the help of future NFL player, Steve Shull, along with Bob Hayes, Kevin Kelly, Bill Foster, Tom Conroy, John Barnett, Steve Cloak, Jim Thompson, Steve O’Brien, Mark Simpson, Doug Shenefelt, Perry Ferrara, Chris Pfund, Walt Frieling, Jim Strickler, Ron Steele, Doug Greenfield, Rick Rynkiewicz, Phil Ivins, Tony Petsis and sophomores Jim Riley, Alec Puketza and Tom Calkins plus a host of others too.