Friday, November 12, 1965. Like with hit movie sequels, the question was simple: When do these things end? That surely had to be the question that Lower Bucks high school football fans asked themselves as another Redskin-Falcon thriller was entered in the record books at the close of the '65 season. Beginning to seem as dependable as the sun rising in the East, the score had been 21-20 for the Redskins in 1963 while the 1964 classic also ended in a one-point win for the 'Skins, 14-13. Then following the same script, just as those two previous contests had seen an undefeated Tribe tangling with an equally impressive Pennsbury group, the latest edition featured an 8-0-1 Blue and Red group meeting up with a 6-1-1 Orange and Black squad. And not leaving the fans wanting in the least, late in the game it was all knotted up, 0-0.

But midway through the final quarter Neshaminy's fleet and stylish halfback, Gerry Barr, broke free on a run that started at the Pennsbury 48. Just one little problem, though, as Pennsbury's speed merchant defensive back, junior Jimmy Neeld, had an angle on Barr as the goal line drew near. . . .

‘Battle’ Even, But ‘Skins Win War 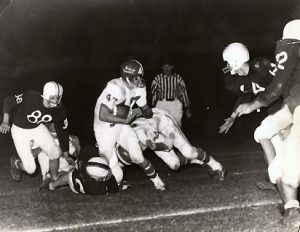 LANGHORNE – With the fans being delivered more than they bargained for, Neshaminy and Pennsbury put it all on the line again on the Redskins’ field Friday night as the two titans of the Lower Bucks County Section One League went to the wire for the third straight year. For almost the entire game, a defensive struggle was waged that seemed surely destined to see the final score come in at a double-goose egg. But instead, it was Neshaminy that banked the thriller behind the speed and determination of one of its red and white clad running backs.

Despite a valiant effort to contain the high-flying Redskins, halfway through the 4th quarter of the 0-0 game, Neshaminy’s Gerry Barr broke free at mid-field and sped toward the Pennsbury goal. Just near the goal line, Pennsbury’s Jim Neeld hit him but Barr managed to fall into the end zone just inside the red flag for the six-pointer. George Nolte booted the extra point to make it 7-0 with 7:36 in the game.

Still Pennsbury didn’t quit. Jeff Dahlman returned the following kickoff to the Falcon 32. On the next play, Neeld, who had taken over at QB from Bill Cooper, fired a 37-yard pass to right end Dave Macomber for a first down on the Neshaminy 31. 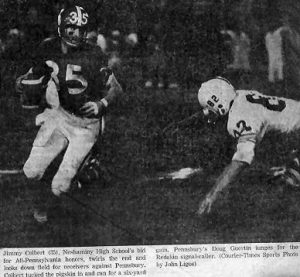 Ed McManus streaked for 19 yards in two carries and Neeld got four on a sneak to make it first and goal from the eight with a little less than four minutes remaining.

After a running play netted nothing, Neeld passed to Macomber in the end zone, but the pass was dropped. McManus was stopped cold and on fourth down, Neeld, not finding any receivers open tried to dart in for the score with a sweep of left end but Neshaminy’s Fred Conger stopped him at the three.

Neshaminy took over and ran out the clock.

The Redskins are now 9-0-1 and lead Section One with a 2-0-0 record. They play at Wilson (1-0-1, league play) next Friday night in their last game of the season and must win to clinch the Section One flag. The game marked the final one at home for John Petercuskie, who earlier this season, announced he was resigning as Neshaminy’s head coach. Neshaminy’s non-losing streak has now been extended to 50 games (46-0-4). 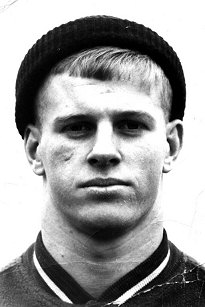 Petercuskie said that the reason the touchdown play worked so perfectly was that Barr had some room this time to get up to top speed.

It was a whale of a football game, and although there was a winner and a loser, the game certainly boosted Lower Bucks football up there as the best or near the best in the entire state.

A fired-up Pennsbury team took the opening kickoff and marched to the Neshaminy five in 17 rushing plays, which ate up 10 minutes of the first period. The Falcons had a first down at the seven, and Jim Broadwater and McManus took two cracks apiece but couldn’t penetrate the Redskin defense.

The second period consisted mostly of play in the middle of the field, with both teams being limited to only one first down each.

Neshaminy did in the third period almost exactly what Pennsbury did in the first. It took the second half kickoff and marched down the field exclusively on the ground, in 17 plays. Neshaminy had a first down on the seven and four cracks at the Pennsbury line brought the ball to the one but not over.

Neshaminy regained possession early in the fourth quarter on its own 41, following a Pennsbury punt. Three plays later, Barr took off on the “game decider.”

The game statistics were remarkably similar. The only exception was punting average, in which Neshaminy’s Rich McHale boomed three for a 40.3 average against 24 for Pennsbury’s Neeld.

Pennsbury’s early game success was attributed to its use of an unbalanced line. Neshaminy had to readjust its defense at halftime.

Barr was the top rushing leader with 100 yards in 13 carries for a 7.7 average. Broadwater carried 15 times for 58 yards and McManus made 37 yards in a dozen tries. 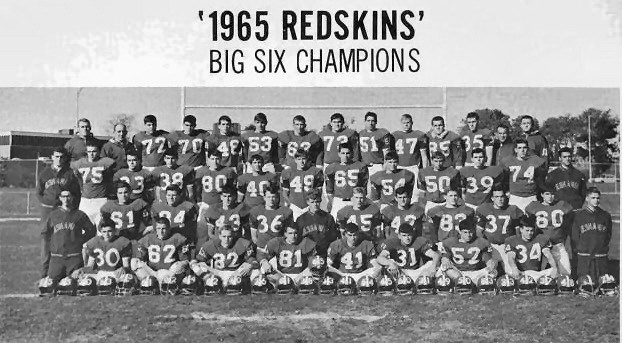 A light drizzle, which fell early in the evening, stopped by game time.

Editor’s Note: In the sendoff season for the Redskins’ great coach John Petercuskie, the ’65 team left it all on the field. And there couldn’t have been a better opponent for the last home game of that year than the ‘Skins Fairless Hills neighbor. No doubt, if there were a mirror image of the early 1960s Indian Nation, it was the ferocious Falcons of Pennsbury. Also making this closeout home game of 1965 special was the fact that it was Gerry Barr who scored the winning touchdown. The younger brother of another Redskin great, Bob Barr, the game put an exclamation point on six years of Redskins teams featuring the Barr brothers with Bob − who played in 1960, 1961 and 1962 − or Gerry helping to deliver the mail. As to the team itself, it was one of Neshaminy’s greatest with players like Jimmy Colbert at quarterback, Rich McHale at end and tackle, Tommy Thomson and Bob Rotolo as the “other” running backs and a host of others. And of course, the final week of the season saw them take to the road as they stopped Woodrow Wilson, 26-7, and finished 10-0-1 thus delivering ‘Cuskie his 5th unbeaten team out of the 6 years he coached. Arguably the “best” of his 6 teams, many observers of the time ranked the ‘Skins at the top in Pennsylvania that year along with Uniontown from out west and John Harris in Harrisburg. Also, although perhaps it need not be noted again, Petercuskie’s overall record came in at a phenomenal 59-1-6 with the last 51 games unmarred by a loss.