Friday, October 15, 1971. This "Great Moment" actually begins on October 16th, 1970. On that night, a 5-0 Neshaminy traveled to Bethlehem to take on an also 5-0 Liberty team. Living up to the advance billing, at the half it was 0-0. But in the final two quarters the Mike Hartenstein lead 'Canes got the better of the 'Skins as they handed the Langhorne squad its only loss that season, 22-6. And after licking their wounds for a year, it looked eerily similar to fans of the sport as a 5-0 Neshaminy team once again lined up against a very tough, but once nicked, 4-1 Liberty club that was looking to make it two straight against the Moleskinners. Only problem for the visitors, though, was the game was at "Heartbreak Ridge" and the '71 "Team of The Century" had been counting the days since the bus trip back from up north 12 months earlier. Vibrating like a tuning fork when they hit the field, the Neshaminy players were a force to be reckoned with as they unleashed their pent up fury on an overwhelmed Liberty, turning what was predicted to be a tightly played slugfest into a 33-6 rout.

Neshaminy gets its Liberty

LANGHORNE − Listen to the sound of Langhorne’s Neshaminy High School staking a legitimate claim as the number one football team in the state.

With kindest apologies to Bethlehem’s Liberty High School, it must be said that Neshaminy handled, make that manhandled, Liberty.

A game which had been attractively billed as “close, with maybe a touchdown difference at the most,” was hardly that.

Neshaminy walked past Liberty, 33-6, in a most important Big Seven Conference game last evening before 13,000 curious fans and the area’s top-ranked team did it so convincingly that the Doubting Thomases went home as just Thomases.

1. To stop Liberty’s fullback, John Jennings, who had averaged nearly 100 yards rushing a game as the Hurricanes built a fine 4-1 record.
2. To stop Liberty’s Rich Wescoe, a dangerous rollout quarterback from the word go. Wescoe, despite a leg injury, presented more problems to Neshaminy’s defense than any other quarterback so far this year.
3. To achieve revenge for the stinging 22-6 loss Neshaminy had suffered a year ago in Bethlehem when the ‘Skins went in unbeaten and came away more than just badly bruised.

We’re happy to report all three cases are closed and have been stamped Mission Accomplished:

Jennings, a 5-10, 180-pound fullback, was held to 23 yards rushing in only eight carries; nearly half of that total was picked up on a fourth-quarter touchdown run of 11 yards, which, in defense of the defense, caught Neshaminy napping.

Wescoe, who had taunted Neshaminy last year with his madcap running, was held to 10 yards on four carries and completed just four of 16 passes for 53 yards, and no touchdowns.

And make no mistake − this victory has gone a long way toward soothing the emotional impact of that loss on Oct. 16, 1970, just one year ago today. 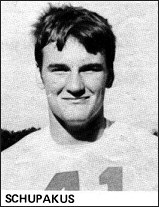 Neshaminy’s head coach, Jack Swartz, was asked if this were perhaps his most gratifying win since he’s been the school’s head coach.

“Right now, yes. Right at the moment,” answered Swartz with a touch of a smile.

It was the kind of win coaches are tickled pink to get, but as for being committal, forget it. Jack, are you the number one football team in the state?

“Hmm, let’s say we have one heckuva football team,” he preached, raising his eyebrows.

Swartz had good reason for his guarded optimism. There are five more games remaining on his schedule. He was quick to point that out. Already, there’s talk of the game with Fairless Hills’ Pennsbury High School on Nov. 20.

But you can forget that, uh, right at the moment.

“We won’t concern ourselves with Pennsbury (the area’s second-ranked team) until the week before the game,” warned Swartz.

The plot was simple. Neshaminy scored two early touchdowns, forced Liberty to come from behind with the pass, and then played superb defense, with one exception, against everything the Hurricanes threw at them.

Neshaminy also played Russian Roulette with Liberty and won each time. The ‘Skins gambled early on a fourth-and-three on Liberty’s 33 and won as Joe Sroba gained 15 yards and a first down.

They went for a first down on a fourth-and-one on their OWN 11 and made it. The percentages are supposed to say punt and play defense.

Neshaminy received some breaks, too. It recovered a punt which struck (Liberty’s) Frank Horwath on the helmet as he attempted to throw a block for the return, and later went in for the score. It played the late flat pass by Wescoe perfectly and the result was a touchdown on a 44-yard interception.

Actually, the first quarter set the tempo for the entire game.

After Neshaminy stalled Liberty’s opening drive, the ‘Skins marched 53 yards in 11 plays as runs by Sroba of 10 and 15 yards set the stage for Bruce Traney’s two-yard plunge with 6:11 remaining.

Liberty’s next series was doomed for failure as Dan Meier recovered Wescoe’s fumble on the Hurricanes’ 43. But Neshaminy was unable to move the ball and Rich McIntyre’s punt bounced off Horwath’s back and was pounced on by Dave Pyle giving Neshaminy first-and-goal on Liberty’s eight.

Four plays later, Pete Cordelli scored his first touchdown of the year on a quarterback sneak. McIntyre’s point-after made it 14-0.

The second quarter was devoted to defense − Neshaminy held Liberty to two yards rushing; Liberty returned the favor by holding the ‘Skins to nine yards on the ground.

“We got no field position in that second quarter,” said Swartz, “but neither did they.”

Neshaminy’s drive at the beginning of the second half salted things away. Liberty was assessed 15 yards for a personal foul and offsides, placing the ball on the Liberty 41. Cordelli hit Dale Forchetti for nine yards, the Bruce McHale for eight yards.

Then it was Cordelli to Forchetti for a 20-yard touchdown, the ninth time the pair connected for a score this year. And it was in typical Forchetti fashion as he fought off two Liberty defenders in the end zone.

Liberty got on the board with 7:31 left on a 58-yard drive which was culminated by Jennings 11-yard run.

“We were in a ‘move’,” explained Chuck Lodge, Nesahminy’s center-linebacker. “We were looking for the rollout (by Wescoe), but it was Jennings on the dive up the middle and there was just no one there to stop him.”

Neshaminy’s final score came with 5:16 showing as Jay Sidman intercepted a Wescoe pass and returned it 44 yards for the touchdown. Was he happy? He says someone owes him a spaghetti dinner for that one.

Perhaps that’s what’s meant by the thrill of victory. 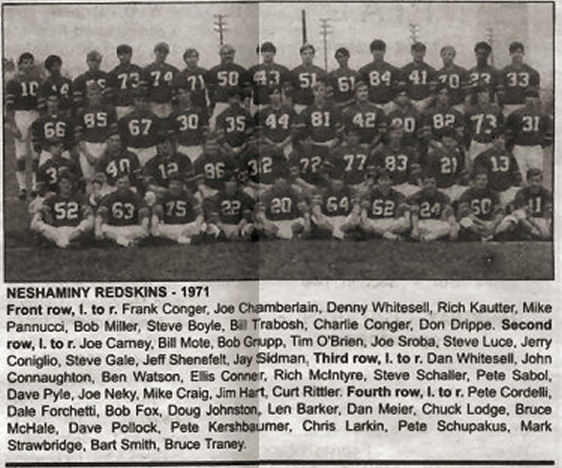 Editor’s Note: The Liberty game not only exorcised the demons of the 1970 loss to the Hurricanes it also crystallized the opinions of the day that the ’71 team was something special. And then backing up those views of observers of the time, the team ran the tables that season and over the last 40 years has begun to take on mythical status. Not hype at all, a close look at the accomplishments of the club provides solid facts to support that the 1971 boys of Langhorne are deserving of that “ranking” including: An 11-0 record (the best at Neshaminy to that season); champions of the Lower Bucks League − Section One and the Big Seven Conference as well; a season ending top-spot schoolboy rank in Pennsylvania by most news organizations and seventh in the country by a national pollster; one “high school” All-American selection and four All-State honorees; too many local area, southeastern PA and Conference “all-teamers” to list; record setting outputs by quarterback Pete Cordelli and receiver Dale Forchetti; and, finally, 15 out of 19 starters – three went “both ways” – in Neshaminy’s Hall of Fame and an amazing 11 of those starters receiving college football scholarships to what was then known as University Division schools, popularly called “D-1” today, with another to an Ivy League school, making 12 in all. No doubt the 1971 Redskins were a talent laden and driven squad, directed by terrific and dedicated coaches, that will always be recalled as one of Neshaminy’s finest editions.